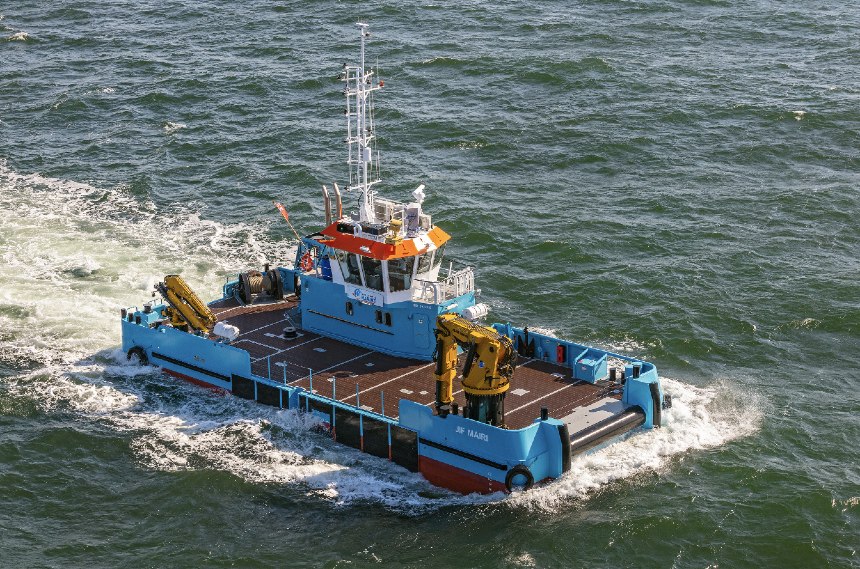 Jif Mairi has a length of 24 metres, a beam of nine metres, and a draught of approximately two metres.

The BV-classed newbuild will be managed by North West Marine. Its duties will include anchor handling, dredging support, surveys, resupply, research support, general towing, and personnel and cargo transport.

Jif Mairi is specially optimised to be more suited to North West Marine’s fish farm support activities. Custom features include wooden removable bow doors, a starboard side ladder, and D fendering on the starboard side.

Power is provided by two Caterpillar C18 main engines, each capable of producing 447 kW at 1,800 rpm. The engines drive two 1,350mm propellers through Twin Disc gearboxes, and this configuration has proven capable of delivering a bollard pull of 14.7 tonnes and a speed of approximately 10 knots.

For electric power, the vessel is equipped with Caterpillar C4.4 and C7.1 generator sets. Hydraulic power onboard is provided by two 55kW electric motors, each driven by a generator set.

A Heila HLRM 140-4S deck crane is fitted on the starboard bow. A 50-tonne anchor handling and towing winch and a 10-tonne tuggerwinch have also been installed.

The below maindeck accommodation space features three cabins, a bathroom, and a separate toilet. A large store area has also been fitted in this area.

The vessel is certified for a maximum of six crewmembers onboard.

At the main deck level are the mess and a changeroom that also provides access to the engine room.

The wheelhouse has a small seating area and a working desk as well as space for survey equipment. The wheelhouse also has large windows to provide an excellent 360-degree view.

New cruise terminal to be built in Aqaba, Jordan