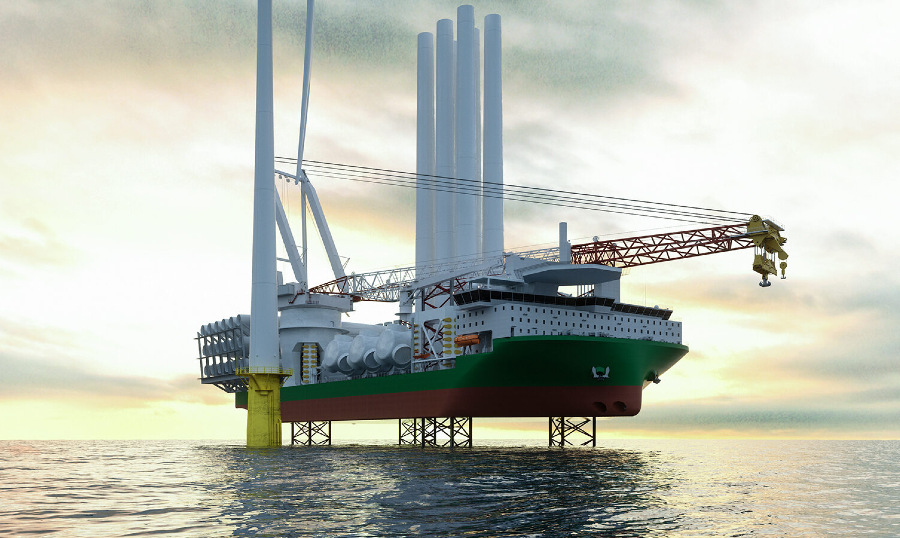 The designers claim that, with a jacking deadweight of 18,000 tonnes, 6,800 square metres of cargo deck area and a 3,000-tonne crane, the vessels in the series will be capable of carrying six of the new-generation 14MW to 16MW wind turbines, and at least five next generation 20MW-plus turbines.

The jacking deadweight and crane capacity will also enable the vessel to carry at least four of the extra-large monopile/transition piece foundations, which are required for the 14MW to 16MW turbines.

Knud E. Hansen added that the vessel is designed for further customisation according to client requirements. Cranes, thrusters, generators, and jacking systems can all be modified and selected based on manufacturer availability such that the vessel can be tailored to suit the individual needs of each client.

In keeping with the objective of design versatility, the cargo deck will incorporate uniform girder spacing in both longitudinal and transverse directions such that foundations for equipment and turbine parts can be standardised and installed in many different locations and orientations.

The vessel will be powered by eight identical generators, each with 3,340 kW of electrical power, which are arranged in two independent engine rooms.

The batteries can supply “instant power,” which reduces the need for “spinning reserve power” from generators running on standby (e.g. during DP operations). These also make it possible to recover approximately 60 per cent of the energy that is used to jack the vessel to the operational height.

To further minimize power consumption, the vessel will be equipped with four azimuthing stern thrusters driven by highly efficient permanent-magnet motors and equipped with nozzles for maximum bollard pull. At the forward end, two tunnel thrusters and two retractable bow thrusters configured to maximise thrust will be fitted.

Optimised for sustained heavy-duty use

The platform will be equipped with four three-chorded trusswork legs which can support it in water depths up to 80 metres.

The spud cans will be optimised for the lowest possible seabed penetration, and these will be fitted with buoyancy boxes to reduce the draught in port, reduce the load on the seabed when the vessel is jacked up, and to help retract the legs out of muddy sea beds.

The platform will be elevated by a powerful high-speed electrical rack-and-pinion jacking system designed for 5,000 load cycles. The optimal load balance of the vessel ensures the total jacking capacity of all four legs can by fully utilised in fully loaded conditions.

The main deck of the accommodation block includes an operations centre consisting of offices and conference rooms as well as a hospital, day room, TV room, change room, and workshop. Above this is a large galley with spacious mess as well as ample provision rooms.

The three decks above include a total of 130 cabins for contractors, crew, and officers. The top deck consists of a bridge with centreline and wing consoles and a large helicopter deck.

Below the main deck is a gymnasium, cinema, TV room, games room, and sauna as well as a laundry room and store rooms.

Knud E. Hansen says negotiations are currently ongoing with companies in the offshore wind sector to further develop the vessel based on their individual requirements.