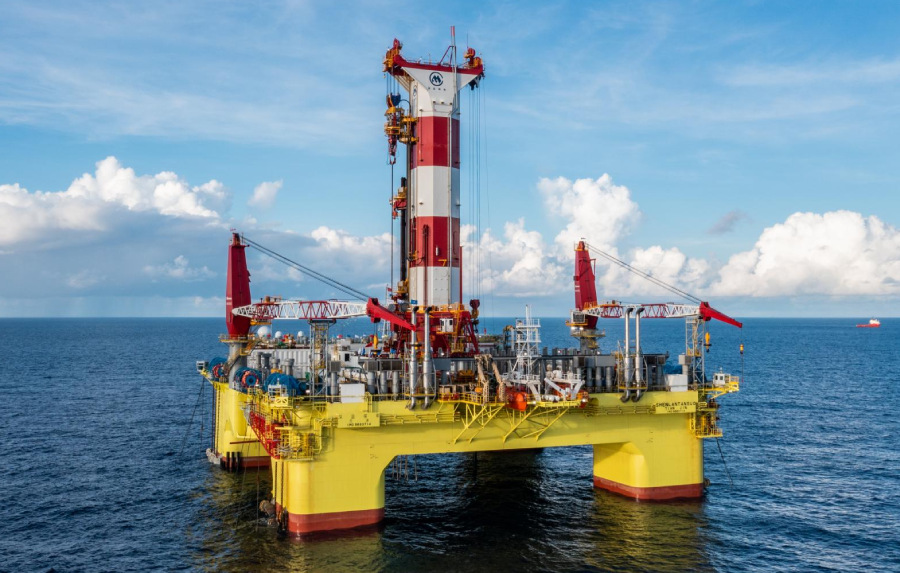 The aptly named DeepBlue Explorer was built by the China Merchants Group (CMG), through subsidiary China Merchants Heavy Industry (CMHI), over a span of four years. Development of the platform also involved cooperation from customer CNOOC, which had wanted a drilling rig employing technologies that guaranteed improved operating efficiency while also being capable of operating in harsh offshore environments.

The 109- by 74-metre rig was designed to be able to operate in water depths of as much as 1,000 metres while its maximum drilling depth is rated at around 9,144 metres. The array of drilling equipment is part of a complete package supplied by Huisman.

The rig utilises a combination of conventional anchors, mooring lines, and dynamic positioning systems to guarantee improved station keeping even in areas that are often subject to significant wave heights, such as the offshore waters of the South China Sea. This means that, regardless of the hydrologic environment and climate conditions in its area of operations, the rig can automatically adapt to its surroundings. Both CNOOC and CMG have claimed that offshore deepwater drilling operations can be safely carried out even amidst the threat of typhoons and other extreme sea and weather disturbances.

CMG said Deep Blue Exploration incorporates a number of domestically-developed intelligent operating systems, making the drilling platform the first in the world to be granted DNV’s intelligent certification. One such system is configured to collect operations and maintenance data in real time, perform cloud-based processing, and carry out remote coordination and optimised decision-making. CNOOC added that the system can contribute to a 35 per cent increase in operating efficiency.

The rig is also equipped with an intelligent blowout preventer system that automatically closes onboard valves in the event of an emergency to mitigate the danger to the crew.

DeepBlue Explorer is being operated by CNOOC subsidiary China Oilfield Services (COSL). The rig began work on its first project in September 2021 by drilling an exploratory well at the mouth of the Pearl River Basin in the South China Sea. The site is located near the Liuhua 16-2 oil field some 230 kilometres southeast of Hong Kong in water depths of 370 metres. Immediately upon completion of this project, the rig will be deployed in the Natuna Sea off Indonesia to serve a 300-day drilling campaign for Medco Energi.