August has seen the Swire Group, one of the oldest British owned shipping companies, in the spotlight for all the wrong reasons. Swire Pacific’s affiliate Cathay Pacific Airways has found itself caught between thousands of protestors seeking to close Hong Kong airport, demanding that the government change its policies, and the Chinese authorities, demanding that the company fire any of its employees who supported the demonstrations.

Hundreds of Cathay flights were cancelled amid the tumult, whilst staff worried about their human rights in the face of Chinese government threats, and several were sacked by the company for their activities. Finally, the Swire-appointed CEO of the airline dramatically resigned on August 16.

Despite stellar first half results, which showed Swire Pacific reporting literally a billion US dollars in net profit for the six months until the end of June, the company’s shares have been hammered by concerns over the future of the airline, and over Hong Kong’s stability, which has underpinned the Swire Group’s hugely profitable property portfolio. Unfortunately, other nasty surprises lurk elsewhere in the Swire Group, in the Marine Services division in particular.

When Hong Kong faces hard times, as a conglomerate, Swire Pacific is supposed to offer protection through diversification. And the main pillar of its diversification has been its Marine Services division, wholly owned offshore support vessel operator Swire Pacific Offshore (SPO), in which the parent has invested billions of dollars since it began its fleet renewal programme twenty years ago.

Unfortunately, in recent years SPO has performed abysmally in the industry recession, arguably worse than all of its major competitors, and certainly worse than at any time in its history. In the first half results, SPO’s operating loss was larger than ever – a loss of US$67 million dollars1. Annualise that loss, and you have the biggest operating loss in the history of the company, at a time when the management has been assuring shareholders that an industry recovery is underway. 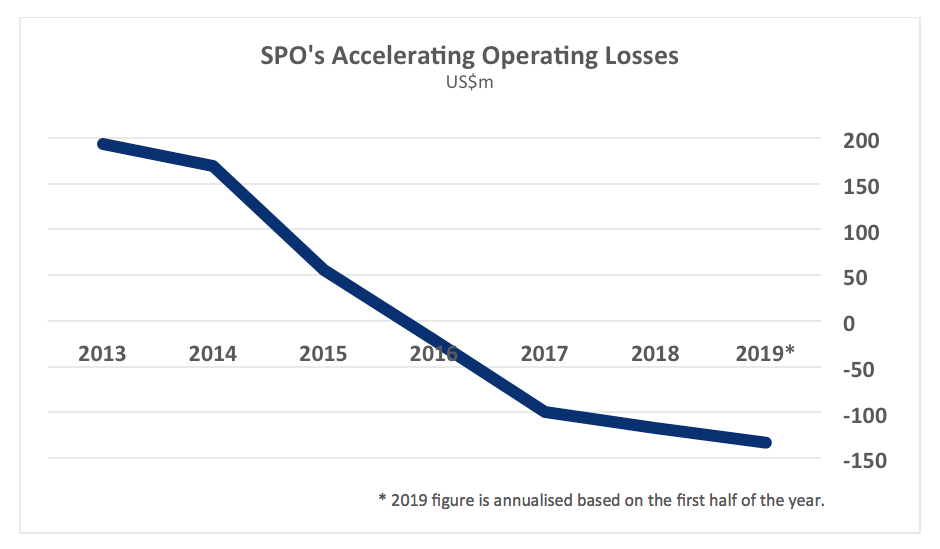 Worse, the company is still burning through cash. A terse note in the results reported, “SPO generated a net cash deficit from operating activities of [$16.5 million],” although this could be construed as an improvement since management noted that, “First half of 2018 generated a net cash deficit of [$31 million]”. This is a company which five years into an industry wide recession is still haemorrhaging cash. It is hard to avoid the conclusion that if it were not for the deep pockets of its parent company, SPO would be bankrupt.

Nobody has had an easy time in the OSV business, but whereas other operators have taken aggressive measures to cut costs and stem cashflow, SPO has floundered. Its first half loss was far bigger than any of its peers, as the table below illustrates. Ten years ago Swire Pacific Offshore was making half the profit of Tidewater with a fleet the quarter of the size. Now it is making five times the loss with a fleet a fifth of the size. 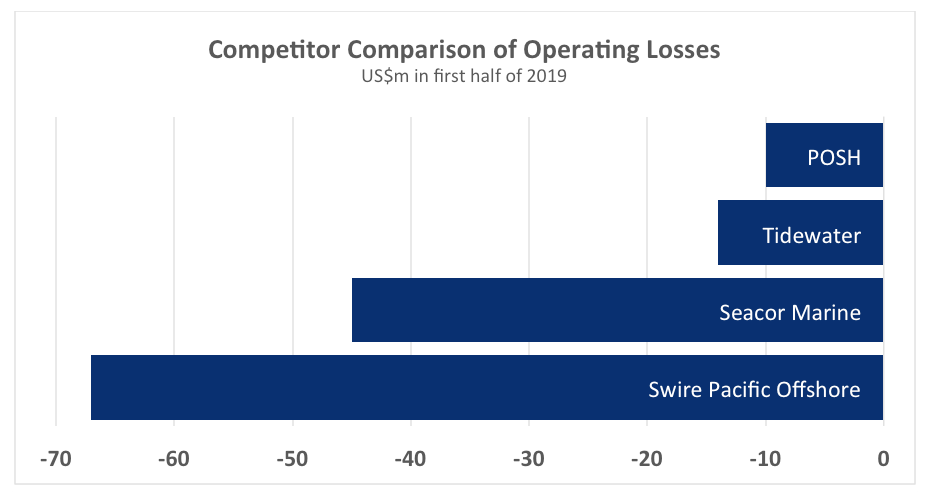 So, what went wrong?

A history of innovation

The Swire Group prides itself on innovation and high-quality service, and within the OSV industry, SPO had a stellar reputation. Its officers, often British, and crew, usually Filipino, were top notch. Its vessels modern, well-built and well-maintained. The company began investing in new vessels ahead of most of its competitors, and was the first to bring DP anchor handlers to the Asian market. It was the only Asian based owner to successfully enter the North Sea, and it was the first to expand in West Africa, which is now the company’s largest market.

It has enjoyed a dominant position in Australia and New Zealand, notoriously difficult markets for outsiders to enter, with strict regulations and demanding unions, but correspondingly high margins. It entered a joint venture with a Russian company to build three massive ice breakers against a long-term contract in Sakhalin in Russia. In 2012 SPO delivered what were then the two highest specification jack up windfarm turbine installation vessels in the world, and entered the renewables market well ahead of any of the other OSV players.

The company prided itself on its own in-house training centre in Singapore, and built a state of the art OSV simulator. Looking at the company in 2013 and 2014, it is hard to imagine the cataclysm ahead.

Write off after write off

The mounting operating losses have been accompanied by write offs on assets and losses on the sales of asset on a staggering scale, starting in 2015 and continuing through 2018. By the end of 2018, SPO had written off $1.1 billion dollars of assets, on top of cumulative operating losses of $305 million from 2016 to 2019. This is a staggeringly large amount of money for a company which at its peak in 2015 only had 92 vessels. Now only 75 ships remain in the SPO fleet, as the company has sought to sell off ships at fire sale prices in the downturn, and the latest results admit that one accommodation barge and one seismic vessel remain in cold stack. 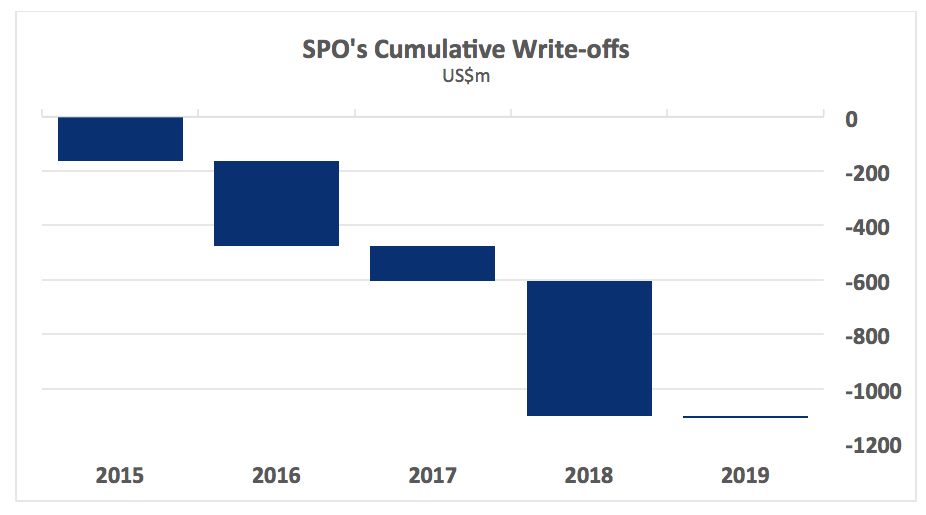 To say SPO got its timing wrong would be an understatement. Whereas other companies were cancelling new build orders and looking to avoid taking delivery of expensive new ships in the middle of a market downturn, SPO inexplicably declared the options on the large PSVs it was building at Universal Shipbuilding in Japan in 2015, taking out more ships from one of the most expensive shipyards in the world, and paying top dollar to deliver them into a saturated market with rock bottom day rates.

It would have been cheaper, faster and easier for the board of SPO simply to have stood in front of the Merlion statue in Singapore and set fire to tens of millions of dollars, than to have confirmed those options on the vessels.

The 2015 also results revealed the $60 million cost of choosing the wrong shipyard in Brazil, a yard which failed to actually deliver the vessels and which SPO then took to arbitration, the results of which appear not to have been made public. The company exited the Brazilian market in 2018.

Whilst praising the company’s innovation it is hard to escape the conclusion that since 2012, SPO has engaged in scattergun diversification into segments of the industry where it enjoys no competitive advantage. The laid-up accommodation barge and seismic survey vessel, and the idle and for sale fast catamaran Pacific Kestrel, testify to speculative investment in areas where SPO lacked experience, scale and any first mover lead or technical edge. Other attempts to enter new businesses mentioned in the various annual reports include salvage, oil-spill recovery, marginal oil production, subsea and ROV, and supply base management.

The 2019 results mention that the subsea business, Swire Seabed, saw vessel utilisation fall from 74 per cent to 60 per cent, and day rates fell 44 per cent to an average of $36,400, so that Swire Seabed’s revenue halved year on year, a mind-blowing deterioration from an already low base.

This is a business headquartered in Bergen, possibly the highest cost location for a subsea business in the world, which has been bareboat chartering in a Siem Offshore vessel to play the North Sea spot market, even as its own vessels are off hire, and competitors like Olympic and DOF Subsea are able to offer their own subsea tonnage to customers without the burden of bareboat charter payments.

Utilisation in the windfarm business was also less than 50 per cent in the first half of 2019, as Swire Blue Ocean has also proved sub-scale, and unable to compete with the major integrated engineering and construction houses like Subsea7, Deme and Van Oord.

A quick look at the revolving door at the SPO headquarters shows that the company has lost experienced people, perhaps contributing to the strategic flip-flopping. Since 2015 SPO has had three different CEOs, none of whom have had any prior OSV experience, based on their public profiles. It has had four CFOs, and the Operations Director, Commercial Director and HR Director have all left as well.

The company appears to have moved from one of the most experienced management teams in the industry to one of the least, with a perplexing reliance on leaders without any prior experience in the marine business. Despite the 20 per cent shrinkage in fleet size and the large number of laid up vessels, the company has not announced any meaningful cost cutting measures.

How to turn a crisis into an opportunity

Without the support of Swire Pacific, the billionaire sugar daddy to SPO, the company would have failed in the crisis. Perhaps the time has come for the parent company, facing increasing pressures in Hong Kong, to practice tough love, and compel the management of SPO in Singapore to improve the company’s performance, or sell it off. The business needs focus on cost control which seems to have been sorely lacking as senior management has changed over and over, and the performance of the business has continued to deteriorate.

SPO once enjoyed and enviable reputation in the market. Now it lags its peers and needs to continue to manage its costs, sell off or rationalise the ad hoc fruits of its flawed diversification strategy, and perhaps even use its parent’s strong balance sheet to grow at a time when assets are cheap. The past strategy seems to have been to buy ships expensively and sell them at the bottom of the market, a sure-fire receipt for disaster. This once great company needs a turn around.

The 2019 half year results can be viewed here: https://www.swirepacific.com/en/media/press/p190808.pdf

1For conversion purposes, all results have been converted from HK$ to US$ at the rate of 7.8. Hong Kong operates a currency peg between the HK dollar and the US dollar.