James Fisher and Sons is one of the few great British successes in the maritime industry, with a market capitalisation of over one billion pounds (US$1.3 billion) at the time of writing, bigger than any offshore support vessel owner in the world.

The company has a long and storied history, being founded by James Fisher, who else, in 1847 to own and operate ships transporting haematite from the Cumbrian hills. The company claims that by the 1870s it owned the largest coastal shipping fleet in the United Kingdom.

Today it is Britain’s largest listed marine services group. Headquartered in deeply unfashionable Barrow-in-Furness, in the north of the country, Fisher has demonstrated remarkable consistency in its growth in earnings, something few other vessel-owning and marine services companies have been able to do.

The company has consistently boasted a 10 per cent+ operating margin, a 15 per cent return on equity, and a nine per cent annual growth in dividends over the period 2014 to 2018. These are incredible numbers for any company, let alone one in the depressed marine industry: 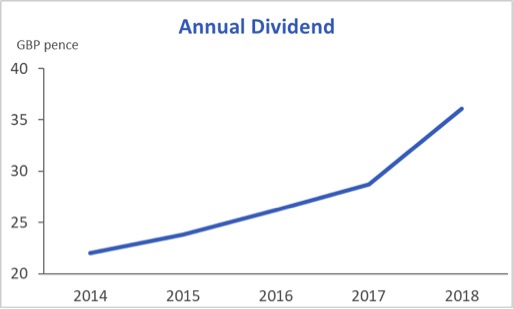 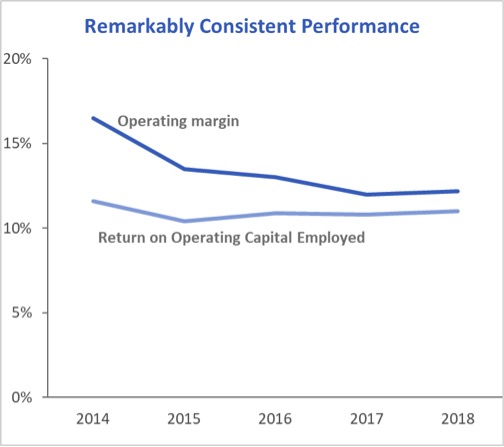 Fisher was first listed on the London Stock Exchange in 1952, and in 1980 the Fisher family founded a charity, the Sir John Fisher Foundation, and donated their shares in the company to it. The foundation currently holds a 17.5 per cent shareholding in James Fisher and Sons, and is the single largest shareholder.

The foundation uses the dividends from Fisher to fund its charitable works, which is focused on the maritime sector and giving to projects in the Barrow-in-Furness area. This really is heart-warming stuff, and very rare in the UK.

Fisher is essentially a company that has grown by endless acquisition. Its culture of buying other marine businesses goes back decades, but has accelerated in recent years.

In 2005 the company acquired ship-to-ship transfer specialist Fendercare Marine Solutions for £12 million, and in 2007 it acquired both Buchan Technical Services for £5 million, and FT Everard, a leading competitor in the UK coastal shipping market, for £35 million.

In 2013 James Fisher acquired Divex for an initial consideration of £20 million in cash, plus a further payment of up to £13 million depending on whether Divex achieved its profitability targets. Fisher has subsequently added a Brazilian diving company, Continental, and Subtech, the South African based diving and coastal works outfit.

The company has always had a focus on government contracts, and James Fisher Defence previously operated the submarine rescue service for the Royal Navy and provided the submersible Scorpio 45, which saved the lives of seven Russian sailors in their submarine AS-28 in 2005.

James Fisher Everard operates a fleet of 17 double-hulled product tankers, up to 11,000 DWT, both owned and chartered in, which carry petrol, diesel, kerosene and biofuels, and are managed in-house. As well as conventional tankers, the company has also made inroads into renewables, and Fisher secured a huge marine services contract to support the construction phase of the Galloper offshore wind farm off the coast of East Anglia, worth in excess of £25 million, it claimed.

Every one a winner!

What’s amazing about James Fisher is that it has these four completely different business lines, Marine Support, Specialist Technical, Offshore Oil, and Tankships, overlaid on top of multiple, diverse operating companies, and that not one of the four divisions has made a loss in any of the last five years, a period in which nearly every major tanker company, every offshore services and subsea company, and every major offshore company has lost money in at least one calendar year, and many have gone bankrupt.

Not Fisher, where every business line seems a winner! Even Ship Finance International (now SFL Corp.), which has also been profitable over the same period, has had much wilder earnings volatility than Fisher, with frequent impairments to its vessels’ values (see here). What stands out is Fisher’s incredible consistency across all segments over a sustained period;

Underlying operating profit by division at James Fisher from page 124 of the 2018 annual report:

Fisher said in its 2018 annual report that its success was built around a commitment to “operational excellence” that requires that all of the company’s businesses, “are cash-generative; have operating margins in excess of 10 per cent; and provide returns on capital employed in excess of 15 per cent.” We’d all like that, wouldn’t we?

For a company that charters tankers, works for governments in defence services, and operates widely in the offshore and marine engineering sectors, these margins and returns on capital are enviable.

Serco, another UK-listed provider of defence services and public sector contracting, has consistently achieved margins of less than five per cent, and experienced negative operating cashflow in three of the five years between 2014 and 2018.

Fisher says its success lies in its capital discipline. It says its acquisition strategy, “is focused on niche businesses with a strong entrepreneurial culture which fit well with our operating style and growth strategy.

“As a cash generative group with a strong balance sheet, businesses are usually acquired using existing cash or borrowing resources. The businesses acquired have a good track record and typically need additional resources for their next growth phase. Where an acquisition bolts on to existing businesses, we seek to optimise shared back office functions, purchasing opportunities and cross-selling within the group”.

If only other companies had such a simple formula for making acquisitions, an area which has been historically very questionable for shareholder returns.

More than 170 entities to audit

Fisher is an incredibly complicated company. The 2018 annual report lists nearly 150 majority owned Fisher subsidiaries, and another twenty five companies in which the company owns between 45 per cent and 50 per cent stakes.

Note 4 to the Fisher accounts shows that, in 2018, KPMG was paid £800,000 for its audit of the group. This seems like an impressively large sum on audit, until you remember that that it equates to less than five thousand pounds per entity. The complexity of Fisher’s corporate structure means that investors might want to consider valuing it at a discount rather than at a premium, as with so many different moving parts the room for mistakes increases.

Conglomerates have a habit of blowing up in periodic disastrous financial write-downs – as GE demonstrated in 2018.

Fisher is not especially indebted (borrowings were only around £130 million at the end of 2018), but the company’s balance sheet shows that over £170 million of its assets are actually “goodwill,” which is the result of the company’s endless acquisitions.

Goodwill represents the premium paid over the book value of the businesses acquired by Fisher. Goodwill is defined as the amount one company pays for another, over and above the appraised value of the target’s assets, (less any assumed liabilities).

This means that Fisher’s tangible assets (ships, plant, machinery and property) were actually only £130 million, rather than the £300 million which are shown on the balance sheet. Suddenly the debt to asset ratio looks less impressive – the actual debt is equal to 100 per cent of the book value of the company’s tangible assets.

The auditors at KPMG have assured investors that they have repeatedly tested the value of Fisher’s assets, including the goodwill. However, the experience of the collapsed services group Carillion, which went bankrupt in 2018, suggests that investors should be exercising greater caution in assessing the solidity of Fisher’s balance sheet.

The warning from Carillion

Jonathan Ford analysed the collapse of Carillion and wrote, “In the UK, companies used to amortise goodwill — meaning they took an annual charge against their profits, with a view to writing off the whole amount over a fixed period — generally about 20 years. But since 2005, they have been able to treat it as a permanent asset, only writing it down if it is deemed “impaired” by the company and its auditors.

“This is established by an annual impairment test. The treatment is controversial. First, there is the question of whether goodwill has much status as an asset. It cannot be sold and, in the event of bankruptcy, almost certainly has no value”.

When something looks too good to be true, it probably is. James Fisher may be an incredibly well run company that has out-performed all its peers in marine services over the last five years, with such a commitment to capital discipline that none of its operating units ever make a loss, that its returns on capital smooth out across the maritime business cycle with monotonous consistency, even as its competitors in every segment struggle in volatile markets (and an industry-wide depression in offshore since 2015).

Or, eventually, amid the dozens of subsidiaries, the endless acquisitions, and the massive goodwill accrued on the balance sheet, a less attractive picture may appear. For the sake of the company let’s hope that Fisher is that rare creature, a company which can beat the markets over long time periods, beat all its competitors, and always make flawless and very profitable acquisitions. Time will tell, and we will be watching.

Jonathan Ford’s piece on the collapse of Carillion Plc and the treatment of goodwill in the UK can be found here: https://www.ft.com/content/765fc482-68db-11e8-b6eb-4acfcfb08c11 (note there is a paywall)