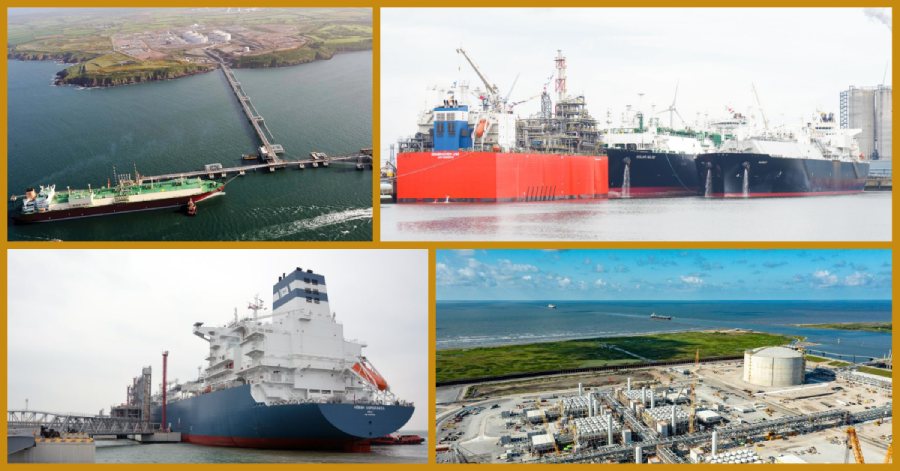 The Russian invasion of Ukraine in February last year sparked a rush for gas in Europe, as the Nordstream pipelines were blown up in the Baltic Sea and President Vladimir Putin’s ruthless regime was hit with sanctions on the export of oil, coal, and gas.

The end of year import statistics show the remarkable switch of EU nations from Russian piped gas to liquefied natural gas (LNG) from the USA, Trinidad, West Africa, and Qatar. Cargoes were even shipped to Europe from Australia and South-East Asia. The EU states purchased an incredible 101 million tonnes of LNG last year — 58 per cent more than in 2021. Europe was the largest buyer of LNG in the world in 2022, surpassing China, Japan, and Korea and driving prices to record highs.

The EU accounted for 24 per cent of global LNG imports last year, and Chinese imports fell due to Beijing’s disastrous, now-abandoned “zero-Covid” policy, which caused a slowdown in the Chinese economy and reduced demand for oil and gas there. In 2022, China’s LNG imports totalled just over 64 million tonnes, a sharp fall from 2021, when China was the world’s largest importer, buying 79 million tonnes of LNG. Indeed, in 2022, China even re-exported some surplus LNG to Europe, helping to top up the EU’s gas storage ahead of winter (and helping make some money for China on the arbitrage between the price of LNG under long-term contracts, and the high spot prices).

But China is now free of virtually all Covid restrictions in the biggest policy U-turn since Richard Nixon flew to Beijing to court Chairman Mao in 1972. Therefore, 2023 will see China and Europe both competing to buy LNG on world markets.

According to estimates from S&P Global Platts, 25 new FSRUs are scheduled to be installed across the EU from last summer up until 2028. The first new units have already come on stream in Germany and the Netherlands in the last few months, boosting northern Europe’s ability to receive more LNG from around the world.

In September, Dutch Minister of Climate and Energy Rob Jetten, along with Prime Minister of the Czech Republic Petr Fiala and the Executive Board of utility Gasunie, inaugurated the commencement of operations at the new EemsEnergyTerminal, at Eemshaven near Groningen (here). The first LNG tanker also arrived on the same day. Two chartered FSRUs serve the terminal: Exmar’s 26,000 cubic metres (cbm) storage capacity barge-based FSRU Eemshaven LNG, and the 170,000-cbm Energos Igloo, previously known as Golar Igloo, which is owned by a joint venture of American private equity company Apollo and US LNG player New Fortress Energy. New Fortress shares have tripled since June 2020.

LNG Prime reported that Maria Energy was carrying a cargo from Venture Global LNG’s Calcasieu Pass terminal in Cameron, Louisiana, in effect making it a symbol of how German reliance on Russian gas has been shattered and US exports of LNG have surged. Hoegh Esperanza itself arrived in Wilhelmshaven on December 15 after loading a cargo in Spain at the Saggas regasification plant in Sagunto and commenced feeding this gas to the German grid on December 21.

Uniper says (here) that, as part of the “Green Wilhelmshaven” project, the site will also contribute to evolving the hydrogen economy. In the future, green ammonia will be landed there, from which green hydrogen will then be produced. Additional green hydrogen is to be produced by means of an electrolysis plant with a capacity of one gigawatt, fed by offshore electricity produced on site. Uniper is testing ways to transport and store this green hydrogen at its Krummhörn site, where work has already begun on converting an existing underground natural gas storage facility into a hydrogen storage facility.

The Wilhelmshaven FSRU is the first of six such terminals in Germany that are scheduled to go online by the end of this year. The German government has backed the charter of five of the FSRUs, whilst Deutsche ReGas is developing the first private FSRU-based facility in Lubmin in the German state of Mecklenburg-Vorpommern, on the Baltic coast in the Bay of Greifswald, not so far from the terminus of the ill-fated Nordstream pipeline. Deutsche ReGas said on December 30 (here) that a small LNG carrier had delivered the first cargo to its FSRU, the 2009-built 145,000-cbm Neptune for  commissioning purposes.

Coral Furcata, operated by the Dutch firm Anthony Veder, delivered the gas, transshipping the cargo from the 137,814-cbm LNG carrier Seapeak Hispania, which serves as a floating storage unit for the project, and is moored nearby in deeper water than Neptune. Seapeak Hispania arrived in the last week of December carrying a cargo from Egypt’s Idku LNG plant.

German utility company RWE is also expecting to receive the first commissioning cargo of LNG at the Elbhafen FSRU import terminal in Brunsbuettel at the mouth of the Elbe River near Hamburg later this month. This terminal also uses a Hoegh FSRU vessel, Hoegh Gannet.

Italy, Greece and others also focus on FSRUs

As well as the six large German FSRUs, five FSRUs are being planned in Greece, two in mainland Italy, two more off Sardinia, and two others in Ireland. Single FSRUs are also planned in Finland, Estonia, Poland, Cyprus, and France.

Currently, the Milford Haven South Hook LNG terminal in the United Kingdom is the largest operational LNG import terminal in Europe with a nominal annual capacity of 21 billion cubic metres. Spain operates six FSRUs and has the biggest existing regasification capacity in the EU, accounting for 33 per cent of all LNG and 44 per cent of LNG storage capacity. Spain is also connected by a subsea pipeline to Algeria, with its rich gasfields in the Sahara.

Portugal operates one FRSU. Unfortunately, the domestic gas pipeline network in Spain and Portugal is not well connected to the rest of the European pipeline network due to the Pyrenees mountain chain where environmental concerns and construction challenges have prevented a Franco-Spanish pipeline in the past.

However, in October, Spain, Portugal and France said they would construct a 100-kilometre-long subsea pipeline to carry hydrogen and natural gas between Barcelona and Marseille. Like Uniper, the countries have been at pains to say that in the longer term, the pipeline will be a catalyst for Net Zero efforts, even though it will likely carry methane pumped from Spain’s FSRU units to France when it opens.

Reuters reported that the pipeline, known as BarMar, will be used to pump green hydrogen and other renewable gases in the long term, but will also “temporarily allow” for the transportation of what Portuguese Prime Minister Antonio Costa described as a “limited amount” of natural gas to help alleviate Europe’s energy crisis (of course).

Spanish utility and wind power player Iberdrola is building Europe’s largest green hydrogen plant in Puertollano in central Spain, so in the longer term, the pipeline concept may be credible.

Europe and Asia in a bidding war?

Thus, so far, the warm winter and weak Chinese demand in 2022 have enabled Europe to shrug off any fears of power black-outs this winter, and charter rates for 160,000cbm LNG carriers have fallen from the peaks they saw last year when there was a frenzy of trading activity to fill European storage ahead of winter. However, now that Europe is frantically adding new FSRU terminals, this year, next year and the following years may see tension between higher Chinese LNG demand and higher European LNG demand. This should be great news for the US, Qatar, and Australia as they seek to sell more gas to replace Russian exports.

There has never been a better time to be an LNG producer with spare capacity to sell to the highest bidder. So, who is stepping forward to fill the supply gap created by Vladimir Putin’s self-inflicted injury on Russian exports? Let’s see next week.

Shell’s excellent LNG Outlook has a lot of great statistics on the global LNG trade.