On August 31, Borr Drilling released its second quarter results for its fleet of 23 jackups (here). Borr operates a fleet of 23 modern jackups with an average age of four years, with another five new jackups due to deliver from Keppel FELS shipyard in Singapore in 2023. Technically, the fleet is one of the best in the industry. Commercially and financially, however, Borr is a disaster zone.

Borr has had a torrid time. Last Christmas (here) we reported how the company had launched an emergency capital raising to try to maintain its solvency, and how it had delayed the delivery of the five rigs from Keppel from next year until 2023.

Last week, the company announced it had lost yet another US$114 million in the first six months of 2021. The company has never reported a profitable year in its existence.

Cumulatively, Borr has lost a cool billion US dollars in less than five years.

The big takeaway from Borr’s presentation were a couple of lines that were widely covered in the industry press. These are on the “in conclusion” slide on page eleven of the presentation. I quote them in full:

If this were true, it would be great news. Drilling is the lifeblood of the offshore industry. If Borr’s fleet were to surge in utilisation, then this could be the beginning of a sustained upturn. This would be great news for supply boat and anchor handler owners, construction companies, pipelay barge owners, and fabrication yards.

The whole offshore ecosystem is sustained by drilling, and since the collapse of the market in 2015, we have had several false dawns. But don’t crack open the champagne just yet.

Reasons to be sceptical

We have reason(s) to be sceptical. Currently, Borr has 57 per cent fleet utilisation, which it “expects” will increase to 74 per cent by the end of this year, but by the end of 2022, the entire fleet of 23 rigs may be working, based on “current market outlook and tendering success”. Just in time for the five new ones to arrive from Singapore to meet all the pent-up demand the company cannot service.

How credible is this? Based on Borr’s fleet status report, which was issued at the same time, achieving 17 rigs on hire at the end of 2021 looks possible, as it requires the company to fix only three more of its fleet in the coming four months (The rig Frigg, which is now offhire, already has a letter of intent in West Africa with an unnamed client to start work at year end.). Seventeen working rigs is possible, likely even, on December 31, 2021, but by no means guaranteed.

However, to achieve full utilisation of the fleet at the end of 2022 would require the three rigs coming off-hire in 2022 to be rehired, and the four customers that have options over Borr rigs in 2022 to exercise the options and continue those contracts, and for the nine currently uncontracted rigs in Borr’s fleet to be fixed as well.

And then on January 1, 2023, in order to maintain that impeccable full utilisation, Borr would need Mexico’s state oil company Pemex to extend all the contracts on the five Borr rigs it has fixed. These contracts will expire on December 31.

There’s an awful lot of “ifs” riding on this projection, especially, when even in the market upturn of 2019 the company only managed to have 19 out of its then fleet of 29 units on-hire at year end, including only 16 of its 22 “modern” jackups (here). December 2019 marked an industry high point before Covid struck and the oil price dived again.

Achieving full utilisation would be quite an achievement, as Borr faces significant competition in the jackup space.

The graph below, assembled from industry sources by SeekingAlpha’s Henrik Alex (here), shows how fiercely competitive the international jack up market is: 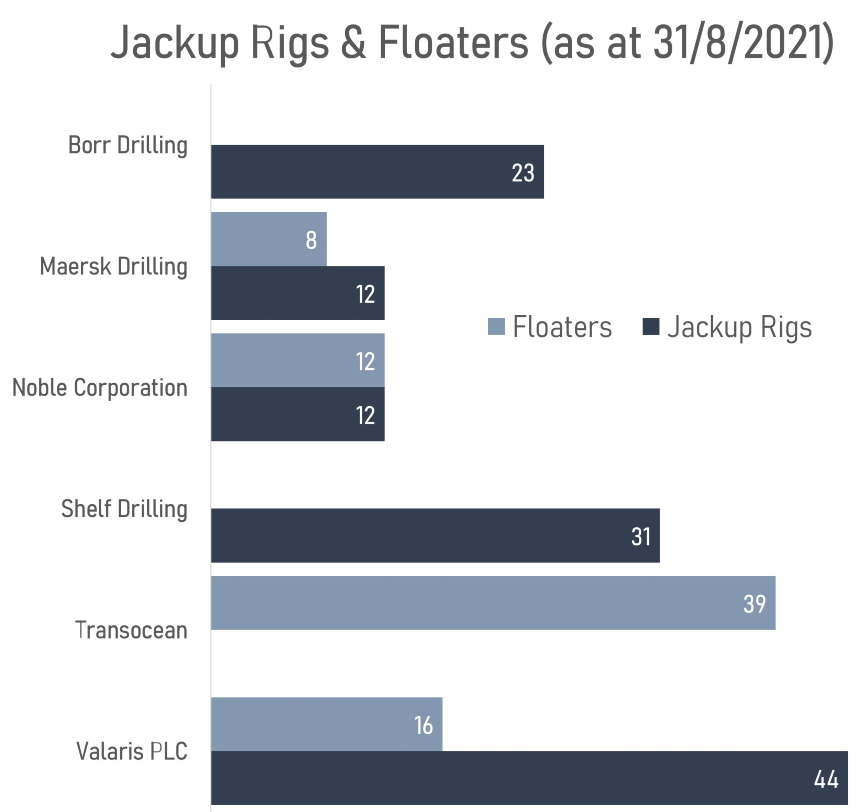 The graph excludes Seadrill, which is currently emerging from bankruptcy protection and operates a fleet of 19 floaters and 15 jackups, and is subject to an offer for some of its assets from Dolphin Drilling and Transocean, as we reported here. Vantage Drilling operates another two deepwater drillships, and, notably, five premium jackups, that compete directly with Borr’s.

Additionally, several key markets have been “nationalised,” with national players having priority over foreign players that own jackups. In Abu Dhabi, ADNOC Drilling has first call on contracts. In Vietnam, PetroVietnam’s PV Drilling is a national champion. In Qatar, it is state-owned Gulf Drilling International. In Malaysia, Velesto has a Malaysian-owned fleet of jackups that receive preferential treatment. We have covered how the Saudi Arabian market is creeping towards gradual domination by state-controlled entities here.  The latest news is that Noble is selling four modern jackup rigs in the kingdom to ADES for US$292 million (here), just as the Kingdom’s Public Investment Fund takes ADES private and delists it from the London stock exchange.

Faced with such strong local competition in local markets, and strong competition from the other international players, Borr is going to have to fight very hard to win the ten new long-term drilling contracts it needs in 2022 to achieve its 100 per cent target.

Borr’s kryptonite is its debt

Borr’s management seems optimistic. It has to. The company’s financial situation is dire. Diamond Offshore Drilling, Valaris and Noble have all restructured. Seadrill is restructuring.

Borr has not restructured and is burdened by debt. This graph shows the enterprise value of all the major drillers. 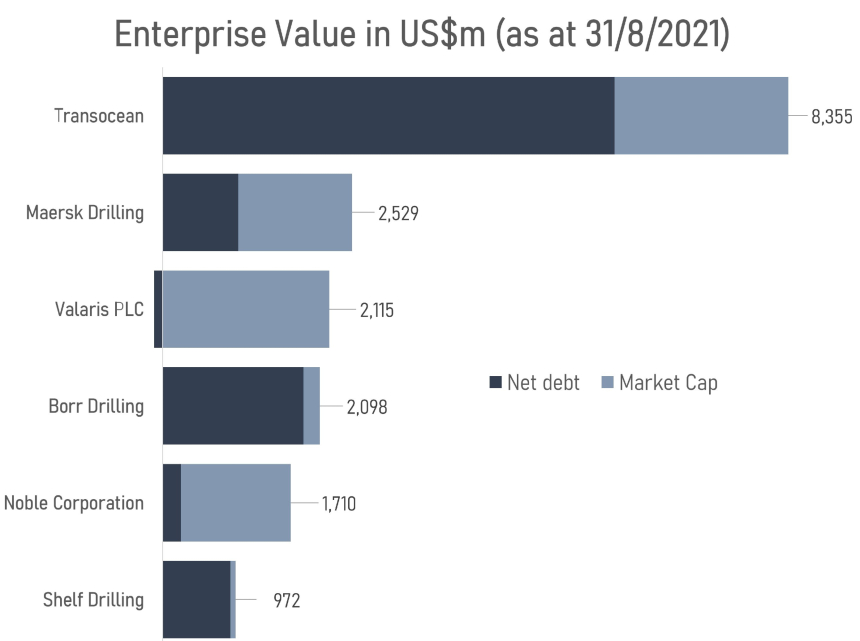 The dark part of the bar is the debt and the light grey is the company’s market capitalisation.

As you can see, Noble and Valaris are nearly debt free. Their shareholders were wiped out in the downturn, but the companies survived, and emerged leaner and unencumbered by the debts of the past. Maersk Drilling was spun off by its parent with a conservative balance sheet. This gives these companies and Diamond, also just out of Chapter Eleven, a huge competitive advantage. We don’t know exactly with what structure Seadrill will emerge from Chapter Eleven, but it is likely to have a drastically reduced debt level, too.

Shelf and Borr are loaded with debt. Borr has US$1.9 billion in debt. Shelf has around US$900 million in net debt, most of it a bunch of bonds that need to be repaid in 2025 (here).

Borr has debt due for repayment in the first three months of 2023. Borr’s shareholders are teetering on the edge. They need management to deliver. The company is currently paying more than US$100 million a year in financing expenses, according to its half yearly report. That’s more than US$5 million per working rig forecast at 2021 year end, US$14,000 a day per rig, which its debt free competitors are not spending.

This is unsustainable and uncompetitive.

When Borr announced it was buying the five additional new rigs from Keppel FELS in May 2018, the published price tag was US$745 million, or US$149 million per rig. Recent transactions have valued similar rigs in service at around US$90 million, a number confirmed by Noble’s deal with ADES just now. Two of those rigs had been bought new by Noble in late 2018 and early 2019 from PaxOcean at prices of US$94 million and US$84 million, respectively.

This is unsustainable and uncompetitive for Borr, but Borr cannot afford to walk away from the purchase contract with Keppel, only defer delivery and pay token interest until 2023. Keppel does not want to be left holding the rigs again and writing them down. It needs Borr to take delivery, even if Keppel is funding the delivery itself with loans.

Keppel itself has been going through a painful restructuring, as we analysed here in February when Keppel claimed it was exiting the rig building business. It isn’t yet, with those five rigs waiting for delivery to Borr in 2023.

US$1.5 billion of exposure in Singapore

Worse, if Keppel merges with local rival SembMarine, as it is discussing, the combined entity will have over US$1.5 billion exposure to Borr. Borr says it has loans and other future financial commitments of US$892 million from Keppel, and a debt of US$753 million to SembMarine (through its PPL Shipyard subsidiary). Singapore’s state-controlled yards have a huge exposure to Borr.

Keppel still owns a big chunk of Floatel International, the floating accommodation provider. It suffered large losses when KrisEnergy, an oil company it had bankrolled, went bust after failing to produce sufficient oil in Cambodia (here). Keppel doesn’t need to end up owning a financially stressed rig owner as well, which would be the most likely outcome of a default by Borr, and the inevitable debt-for-equity swap with its creditors, of whom Keppel is one of the largest.

Hope is not a strategy

In its half year results (here) in July, Keppel was at pains to point out that its ongoing shipyard business was profitable – if you excluded the “legacy rigs and receivables,” which were dumped into a separate entity in the restructuring in January.

By carving these bad assets out, Keppel hoped to separate its problems of abandoned rigs, uncompleted hulls, and bad debts from bankrupt rig owners like Sete Brasil from the remainder of the business.

Borr’s management is hopeful 2022 will be a record year for the driller. Maybe it will, but hope is not a strategy.

Keppel’s management hopes it has put its rig-building problems behind it, too. Unfortunately, Borr’s precarious financial position and probably unsustainable debt load means that Keppel is exposed to Borr’s problems three years on from the coup of selling the five rigs to Borr. Until the rigs are delivered and the debt paid, Keppel’s management face a white knuckle ride with Borr.

Borr’s creditor approval for its financing plan in January sets out the Keppel and SembMarine debts here.