“Turku thanks Meyer!” blared the front page headline of Finland’s business daily Kauppalehti the day after an August 4 press conference confirmed a deal had been struck between Korean owner-creditors for a German-Finnish partnership to buy STX Finland’s Turku yard.

No price was revealed, but Minister Jan Vapaavuori said, “the Turku yard’s financial situation was reflected in the price.”

A family owned company in business since 1795, Meyer Werft will have paid a thoroughly Teutonic due diligence and will have got the sums right.

Meyer will own 70 per cent of the renamed Meyer Turku yard, with 30 per cent held by Finland’s state-owned Industrial Investment, which will then sell its remaining stake to its partner at a later date.

What is known is that STX’s governance was unprofitable, lacking both sufficient investment and financing and driving away potential orders worth up to €2.5 billion (US$3.3 billion).

The first yard to go entirely was Rauma, which closed this earlier year to become a maritime industry business park. Helsinki had a 50 per cent share sold to Russia’s United Shipbuilding Corporation in 2010, with the Russian company now trying to take a controlling stake.

Neither Meyer nor the ministry has said how much the Finnish Government will invest in the venture, but Kauppalehti put the Finnish side’s contribution at €100 million (US$133.6 million). With STX Finland’s debts estimated to sit at approximately €200 million (US$267 million), Meyer and its CEO, Joseph Meyer, are seen as the white knight riding to the rescue. Suffice to say, Turku’s workers and subcontractors elated.

One such subcontractor is Laivasähkötyö, whose CEO Jukka Hietarinta is also head of Finland’s Shipyard Subcontractors federation. “It’s very positive that (Joseph) Meyer himself has gone through the situation with us,” he said.

Mayer had also been in touch with companies before the deal, gathering feedback on the yard’s weaknesses and strengths. Hietarinta contrasted this with the absence of STX Finland’s Korean parent company during crucial crisis meetings between the yard and subcontractors.

Jussi Raunio, CEO of firedoor maker Parmarinen, (like all Finns) watched aghast as the cruise ships ‘Oasis 3’ and ‘Oasis 4’ went to STX France. Raunio was effusive about the German company’s abilities to create innovations and technological solutions and looked forward to working with them in the future. Counterpart Kalle Isotalo of Antti-Teollisuus, meanwhile, confirmed that Turku is going to the best possible buyer. 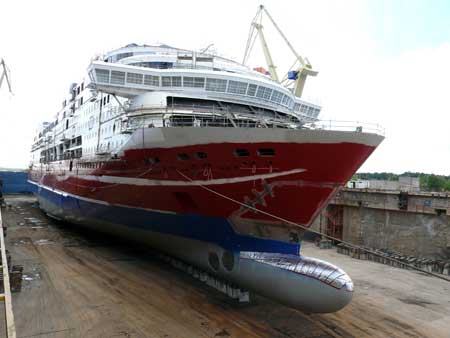 Another benefit to the deal is financing, the main reason for STX Finland losing the cruise ship orders. Meyer has a backlog of excellent contacts and, crucially, will be able to add German banks to the equation. Additionally, Finland’s state credit agency Finnvera has also been authorised to double its maritime limit to ensure future transactions do not suffer from the financial obstacle.

Simultaneous to the yard purchase was a two-ship order from TUI Cruises’. The order will provide up to 12,000 man-hours of work and is worth nearly a billion Euros. The ships will be delivered in 2016 and 2017. TUI Cruises had made it clear that the company’s ownership change was critical to further orders.

For its part, Meyer gets a company and associated sub-contractor cluster that has the one of the world’s longest track records for cruise ship construction, beginning in the 1970s with RCI’s ‘Song of Norway’.

Additionally, five of the world’s largest ten cruise ships call Turku their birthplace, not to mention the world’s largest LNG-fuelled cruise passenger ferry, ‘Viking Grace’. So while Meyer is busy building oceangoing cruise vessels in Papenburg, with orders until 2019, the spare capacity in Turku is both needed and available. Incidentally, TUI Cruises has options for an additional two cruise ships.

Finally, the cruise industry sector is abuzz with rumours that Norwegian Cruise Line (NCL) is weighing up ordering two 200,000GRT ships. Such vessels are out of Fincantieri’s scope, whilst STX

France, meanwhile, is busy with ‘Oasis 3’ and ‘Oasis 4’. With much of Meyer Germany booked to capacity, Turku may be the first choice to win the order. If so, Meyer Turku will be seen as another German masterstroke.

COLUMN | Just once, can we please let the facts get in the way [Tug Times]