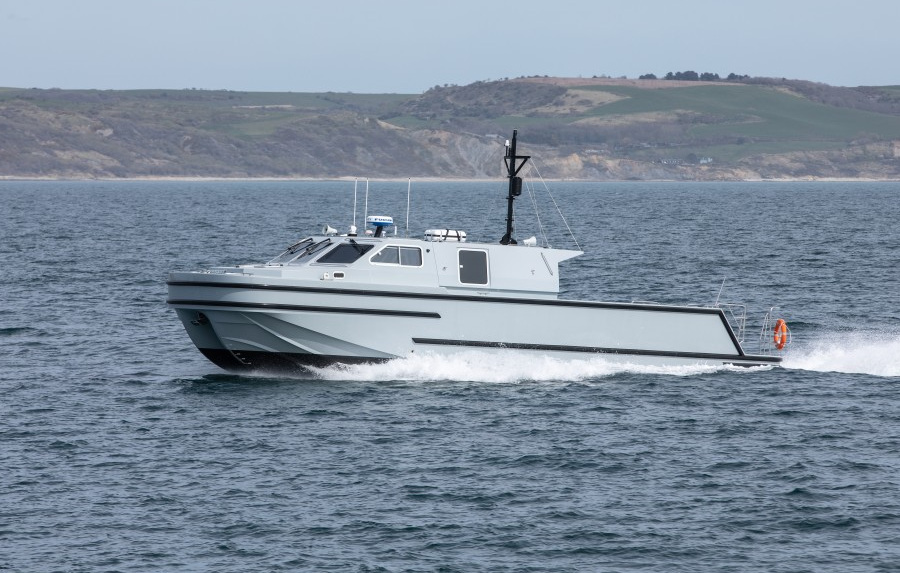 The UK Royal Navy recently took delivery of the final one of three autonomous surface vehicles (ASVs) that were developed under a technology demonstration project intended to introduce a new series of uncrewed mine countermeasures (MCM) platforms.

The 15- by six-metre RNMB Hebe, named after the ancient Greek goddess of youth, has now joined sister vessels RNMB Harrier and RNMB Hazard as part of the Royal Navy’s crewless minehunting programme dubbed Project Wilton. The navy expects Hebe and other similar unmanned systems will completely take over the MCM role from traditional manned vessels, which will be retired from UK service within the current decade in line with the Ministry of Defence’s 2021 White Paper.

The replacement of the manned MCM vessels is also influenced by the fact that the new ASVs will finally enable the Royal Navy to effectively neutralise influence mines and other modern digital mines that may not otherwise be detected under challenging conditions with the use of more conventional equipment.

The design and construction of Hebe was carried out by defence technology firm Atlas Elektronik UK (AEUK) with the Project Wilton team based out of HM Naval Base Clyde in Scotland. The 15-metre vessel utilises the same general hull design as that of an existing workboat series that AEUK is building for the navy for use in training, dive support, and survey missions. Hebe, however, is the sole example of the series to be designed and built from the outset for uncrewed MCM operations.

Measuring four metres longer than sisters Harrier and Hazard and with a greater number of onboard sensors and other equipment, Hebe is able to work in isolation on operations but may also be integrated with existing equipment. As with the two earlier boats, it is capable of working in different configurations – manually, remotely or autonomously – to detect and classify mines and maritime ordnance even while sailing at speeds of 13 knots. A draught of only 0.8 metres will allow the craft to easily operate in littoral and near-shore environments as well.

The ASV’s autonomous operating mode is also fully compliant to COLREGS, with the craft’s onboard radar, AIS, and EO/IR sensors providing data needed by a sophisticated sense-and-avoid (SAA) sub-system. SAA allows the craft to detect both static and moving obstacles and avoid collision automatically.

A high-output, power generation module developed by AEUK can produce four current-controlled outputs as well as the acoustic source power needed for mine sweeping.

The craft’s larger size enables it to accommodate a team of navy MCM personnel. In addition to controlling the craft itself, the MCM crew can coordinate and control all three Project Wilton ASVs or monitor autonomous offboard sensors, in effect allowing Hebe to function as a mobile command-and-control platform. There is also the option of controlling the vessels from a land-based remote-control centre, which is the ideal approach especially when deploying the boats in denied areas without any nearby supporting friendly forces. AEUK’s proprietary command, control and communications (C3) system can simultaneously provide information to the land-based control cabin, allowing human operators to maintain a proper lookout at all times in accordance with COLREGS.

In addition to performing MCM missions, Hebe was designed to also execute hydrographic survey missions in support of naval and defence operations including those conducted during peacetime. For this latter purpose, its available payloads will also include smaller autonomous underwater vehicles (AUVs).

The entire system is designed to be highly flexible and rapidly deployable, capable of being loaded onto trucks and transported to wherever it is required to conduct minehunting or survey operations.

The navy said the Project Wilton team is currently undertaking comprehensive trials and a capability development programme to ensure that Hebe and its sister boats are ready to deliver route survey operations as well.