Written by on February 7, 2019. Posted in Unmanned Naval Systems. 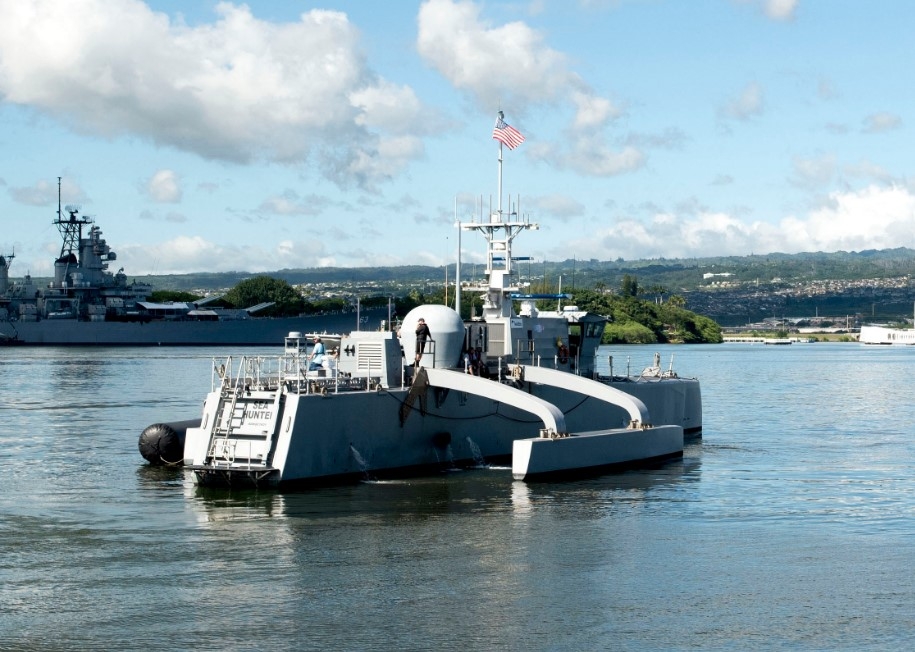 It was recently announced that the US Navy’s remotely controlled trimaran vessel, dubbed an “anti-submarine warfare continuous trail unmanned vessel” (ACTUV) Sea Hunter had successfully completed an autonomous passage from San Diego to Pearl Harbour and back.

Constructed by Vigor Works in Oregon, Sea Hunter is powered by twin diesel engines, and has a top speed of 27 knots. Range is 10,000 nautical miles at 12 knots. A central hull, twin outrigger, configuration helps ensure that it is a stable platform.

Search and detection sonar is fitted, together with a full suite of radar, electro-optical detection, and electronic warfare equipment. Data link enables the ACTUV, which incorporates advanced autonomous navigation and anti-collision systems, to be controlled from a remotely located operations centre.

Sea Hunter has been undergoing trials since 2016, with tests reportedly including tracking of underwater targets, minehunting operations, acting as a long range communications hub, and flying a parasail fitted with electronic sensors.

The Sea Hunter project, which is being run by advanced defence technology specialists Leidos Defence Group is a key node of US Navy plans to greatly expand combat operations by its unmanned surface vehicles (USV). The Office of Naval Research has awarded Leidos a contract to develop and operate a second such vessel, which is already under construction at an as-yet unidentified facility, reportedly located in in Gulfport, Mississippi.