Written by Baird Maritime on May 1, 2020. Posted in Unmanned Naval Systems. 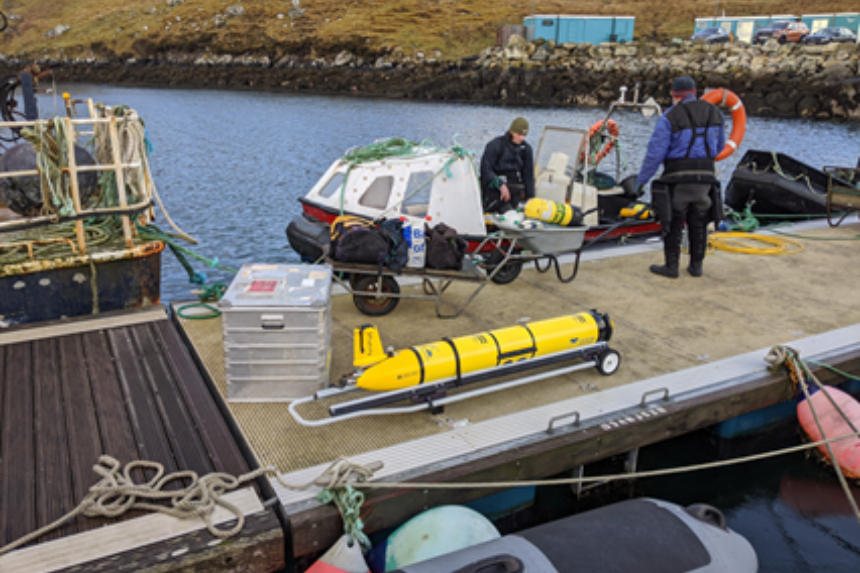 The Royal Navy has begun conducting trials of underwater gliders to determine their feasibility in anti-submarine warfare (ASW).

The unmanned gliders, using their array of cutting-edge sensors, are capable of sending near real-time information on temperature, depth, salinity (salt content), currents, oxygen levels, turbulence, and more. These parameters can impact the efficiency of the sonar and sensors used by the navy’s Type 23 frigates and Merlin and Wildcat helicopters, as well as the Royal Air Force’s P-8 Poseidon patrol aircraft, during submarine hunting operations.

One such glider is being trialled in the North Atlantic west of Scotland. The navy said that the gliders can relay information in a matter of hours whereas data collection used to take months.

The intention is for the navy to eventually deploy gliders continually to high-threat areas to give a clear and constant picture of the underwater battlespace, meaning operational decisions will be based on the very latest information. Having the data quickly means sub-hunters will be able to adapt better when they are attempting to detect underwater threats.

Each glider can dive down to 1,000 metres using controlled buoyancy to drive itself to the surface and back down, which ultimately means it can stay out at sea for months on end and constantly send data.

The glider being trialled off Scotland was due to stay out for four weeks but has been extended to up to five months, giving the project the opportunity to test the glider to its limits on a long duration mission for the first time.

Right now, the Royal Navy continues to trial these gliders as part of Project Hecla, which was established to optimise the navy’s ability to collect and exploit hydrographic and oceanographic information. One glider is currently being tested off the North West coast of the Outer Hebrides as part of the programme.

The trials are supported by the National Oceanographic Centre, the British Oceanographic Data Centre, and the Scottish Association for Marine Science.