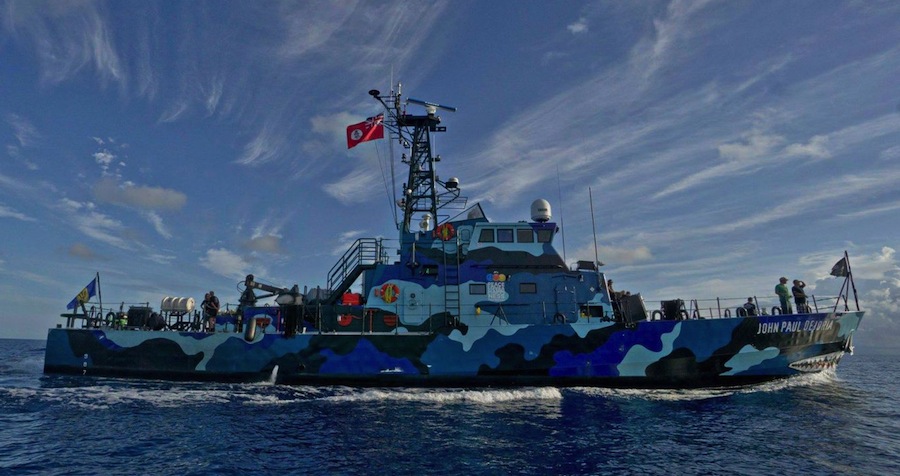 Well, suddenly I find myself in near agreement with Sea Shepherd, an organisation a US judge once denounced as pirates, for their “aggressive and high-profile attacks” on Japan’s whaling fleet and which is the only NGO ever declared persona non grata by the International Whaling Commission.

I’m now tempted to overlook the awkward fact that Sea Shepherd created its own navy with a fleet of eight ships, complete with an aviation arm, including drones and helicopters, to literally fight battles at sea. I might even be persuaded to ignore how Sea Shepherd roams the world as if it were a legitimate military force, which is, conveniently, unaccountable to anybody but itself. But such matters become mere trivialities when, finally, Sea Shepherd shares some of my prejudices.

You see, Sea Shepherd has twigged, what I’ve always known, that something must be done to mitigate the threat that an abundance of sharks poses to humanity. About time, thinks me. Bring it on.

Okay, I know, you’re thinking that it’s too good to be true: there’s no way Sea Shepherd magically changed its spots. And you’d be right to doubt my new-found “enthusiasm” for Sea Shepherd. It is, I’m afraid, still on the dark side of conservation. But let’s give Sea Shepherd praise where it is due: profuse sharks need managing. In other words, it is – by default and, mostly likely, by ironic ignorance of logic – saying the opposite about sharks to the NGOs at CITES who think that most species of sharks are endangered.

You see, Sea Shepherd wants the authorities in Queensland, Australia, to modernise its shark protection programme at a cost of $33.4 million, of which just $4.2 million would be spent on operational expenses. That’s a very generous proposal, according to Sea Shepherd, which would manage the cash.

Urging the Queensland Government into action, in support of Sea Shepherd’s Operation Apex Harmony, Campaign Coordinator Jonathan Clark said, “After years of documenting the dreadful harm caused to Queensland’s iconic marine fauna, we see that the time to change has passed. Queensland needs to catch up and indeed has the opportunity to leap ahead in embracing technology to provide shark mitigation that carries the other benefit of making our beaches safer places.”

Of course, unlike me, Sea Shepherd, which is hypocritically prepared to risk the lives of third parties in physical engagements on the high seas, still can’t get around to supporting culling. It mistakenly believes that sharks need more protection from people than people do from sharks. So it advocates the use of, in its words, modern, non-lethal shark bite mitigation technologies, including personal protection devices. Yeah, right.

And it wants to be given millions of dollars to buy and manage expensive high-tech equipment because, in its words, indiscriminate shark nets off Queensland’s shores, entangled five whales unnecessarily in 2019. Am I being callous in thinking that five trapped whales is a shockingly low number to be quoted as compelling evidence in support of a plea to raise millions of dollars to fund a conservation programme?

But let’s not worry about getting too cynical. There’s more fake praise still to be heaped on Sea Shepherd when it comes to sharks. On its website, in a box that’s difficult to read, placed at the bottom of a page, like an embarrassing relative locked in the cellar, is a concession by Sea Shepherd to Aboriginal peoples. It’s worth quoting in full:

“Sea Shepherd Australia acknowledges the Traditional Custodians upon whose ancestral lands we live and work. We respect their Elders, past and present and emerging, and acknowledge the continuing connection that Aboriginal and Torres Strait Islander peoples have to the land, sea, sky and waterways. Sovereignty has never been ceded.”

Yes, there you have it folks, according to Sea Shepherd, national sovereignty matters. But why does this respect only apply, according to Sea Shepherd, to Aboriginal peoples? Why shouldn’t it be granted to nation states such as China, Iceland, Japan, Namibia and Norway, which along with many other great countries have developed noble traditions, which long-predate their own nation state’s creation, of hunting on land and sea.

But it is nevertheless, as my good friend Grahame Webb reminded me recently, reassuring to know that Sea Shepherd supports the killing and eating of sea turtles, dugong, sharks, cassowaries, bush turkeys and any other animal that inhabits Aboriginal and Torres Strait traditional lands and waters, including those inhabiting the entire Barrier Reef. In the best tradition of the founding principles of CITES, which I had the honour to serve as Secretary-General, may the same rights be extended to and respected in every nation state.

Eugene Lapointe is the president of the IWMC World Conservation Trust and a former secretary-general of CITES.