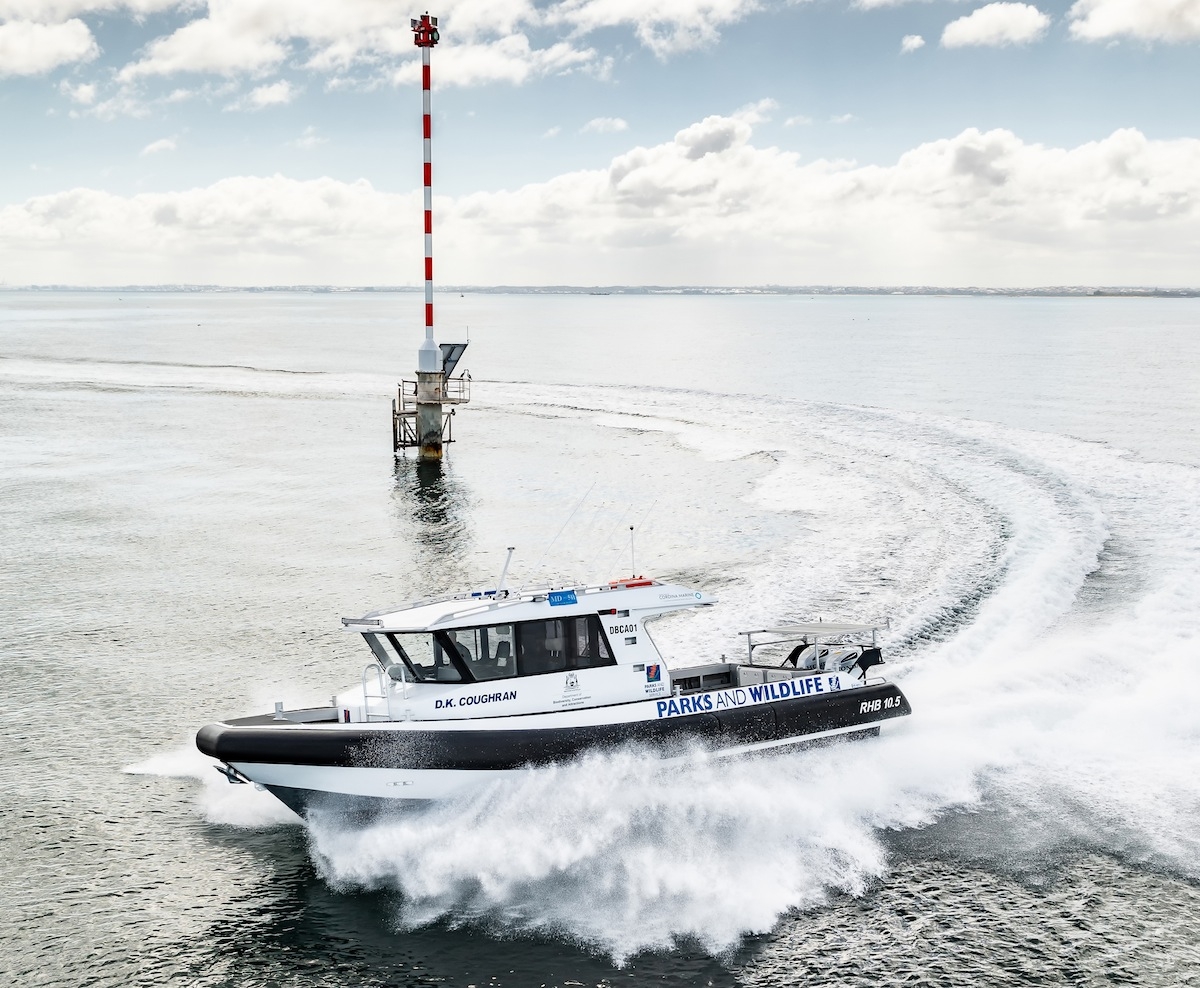 This is Cordina Marine’s fourth vessel for DPAW with two more currently under construction. Where this vessel type has usually been for the patrol role, DK Coughran is more a workboat.

The vessel was named after Doug Coughran, a revered former employee of DPAW. One of many near unbelievable things he did was to save a sea lion from a slow death. He was in a boat passing the animal (of a moderately endangered species) and saw it had a plastic bait strap tight around its neck. He immediately put a knife between his teeth, dived in, straddled the sea lion and cut it free.

Two distinct geographical and functional areas will be serviced: the ocean waters from Rottnest Island to Seal Island in Shoalwater Bay plus the islands in between, where DPAW is especially concerned with whale migration, and the Swan River Park, which has intensive and mixed recreational use.

Duties on the river include water sampling for pollution, oxygen content and algal bloom. DPAW is also the guardian of dolphins spending time in there, particularly with juveniles.

The usual crew is two or three, with four seats being provided in the wheelhouse. Extra pedestal seats can be added, and there is a drop-in eight-place bench seat for whale watching. Other part time drop-in gear includes a whale-watching tower. 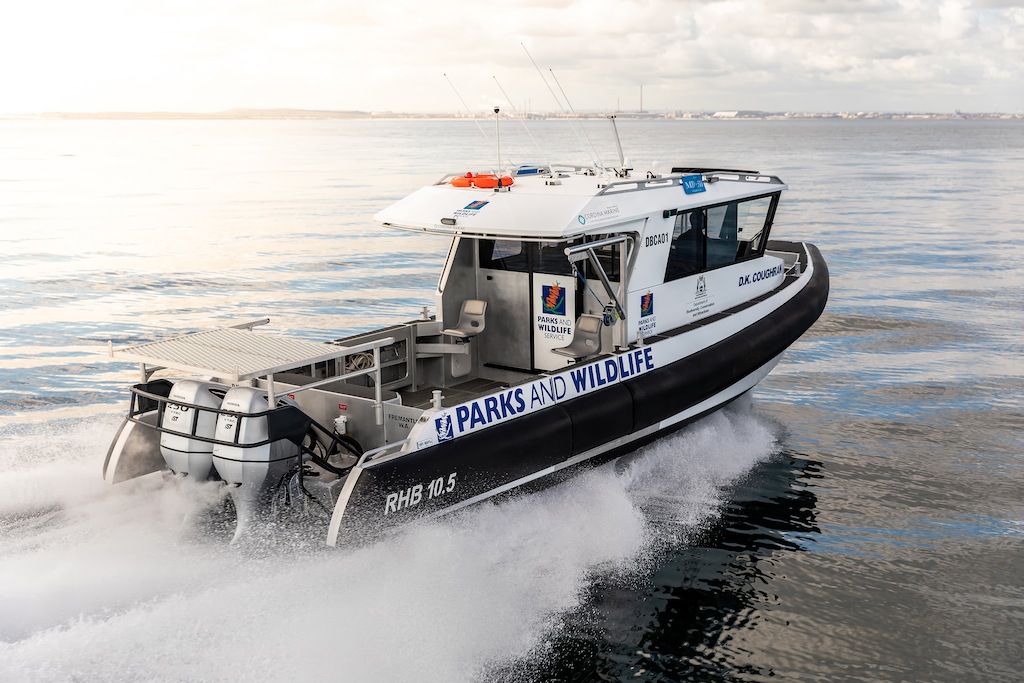 For ocean duties DK Coughran carries a small inflatable on a removable platform above the motors, deployed by a manually operated davit which is also removable. Absent the tender, the platform is available as a work surface.

Nominally a rigid inflatable, DK Coughran is perhaps better described as a collared aluminium vessel. The one-piece collar is foam rather than air filled using a technique and materials that are claimed to give a ten-plus year working life and zero water absorption.

The collar gives protection to DK Coughran and vessels it contacts for the full circumference other than the stern (where the motors are protected by a crash frame). For bow-on contact the anchor is mounted below the collar, removing the projection of the typical RIB’s mini bowsprit. Anchor hauling is by a Lone Star drum winch, handling both chain and rope; probably the most reliable system for a two-component cable.

Berthing on other vessels will almost invariably be bow to. This will be done from a bow cockpit, reached from the fore cabin or via the side decks. Security is provided there by well located handrails on the wheelhouse top that continue around the forward edge to where a ladder leads to the cockpit’s deck.

The deck here, as elsewhere in the boat, is sheathed using the Aquadeck cork product. Its diamond pattern has excellent non slip properties and combines them with good wear resistance.

The wheelhouse itself is a roomy space, made roomier by a forward raked windscreen that also cuts down glare. As on all government vessels communications are taken seriously, with VHF, park VHF, police-band radio all fitted, the equipment integrating neatly and efficiently with the other displays and controls.

Gone are the days of sit where you can; the crew is provided with Avento Pro Air suspension seats equipped with seat belts. Provided in the interest of occupational health and safety, but the crew also benefits from a day’s work that feels shorter. Another item laid on that used to be unheard of in coxswain-sized vessels is a flushing toilet. 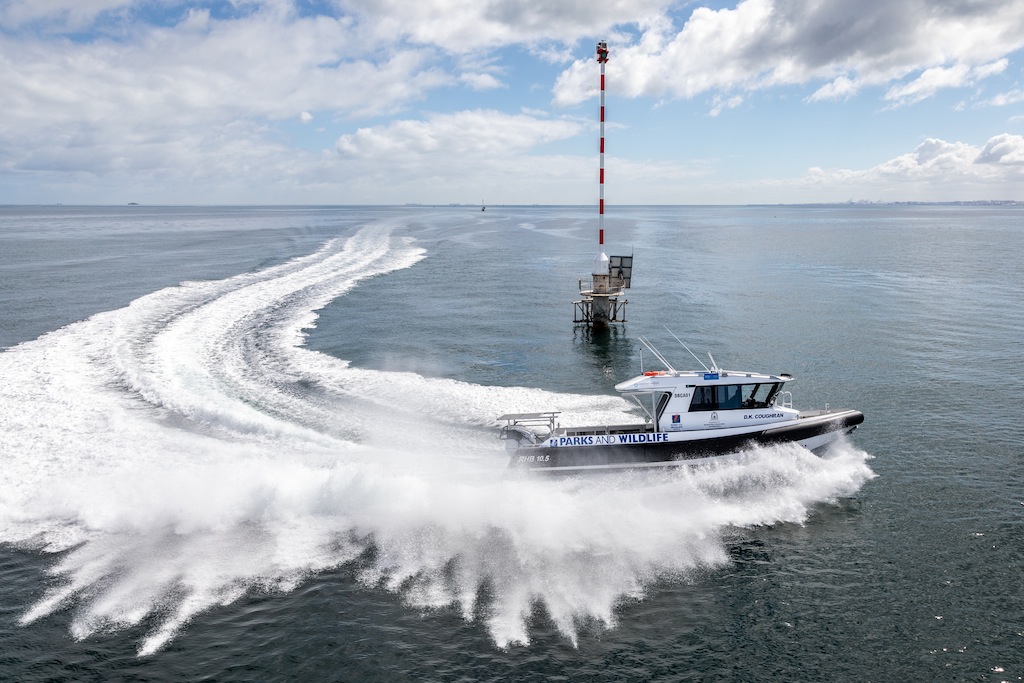 Like all WA Government vessels DK Coughran can be called on for search and rescue duties. The electronic fit out does not include radar or FLIR, but a lightbar for night searches and a flashing blue light for emergency work are installed as is a GPS tracker. A cockpit-mounted bollard provides for normal towing, and a forward bollard allows towing alongside.

10.5 metres is the measured length, but the more critical dimensions are the beam of 3.6 metres and the air draught of 2.6 metres. The former for entry into the storage shed, on a tailored aluminium jinker, the latter for passing under all of the Swan River’s bridges. Regretful owners of surprising numbers of recreational vessels have braved the bridges without taking that measurement.

Despite the limitation on dimensions this is a roomy vessel with sufficient space for its functions. It is also a basically simple vessel. For instance, its foam filled under deck spaces mean that no bilge system is required – a worthwhile non-requirement for a vessel propelled by outboard power.

The chosen power is provided by a pair of 186 kW Hondas. They were fitted with four-bladed propellers and, during trials, with Permatrim cavitation plate extenders. Mr Cordina reports less ventilation during hard manoeuvring and better trim with only minor movement of the legs.

On trials maximum speed just exceeded 39 knots, a speed unlikely to be reached again very often. Under conditions verging on rough, 30 knots was comfortably sustainable; meaning the probable normal cruising of 26 knots is realistic. At that speed the range is 300nm.

In terms of the electrical installation, the lighting used only Hella, the wiring was fire rated, and fuses were fitted throughout rather than circuit breakers. Although that might seem a retro step, Mr Cordina said replacing failed breakers was a difficult task for a vessel operator to carry out; fuses were simple. As is the vessel herself, and similarly achieved. 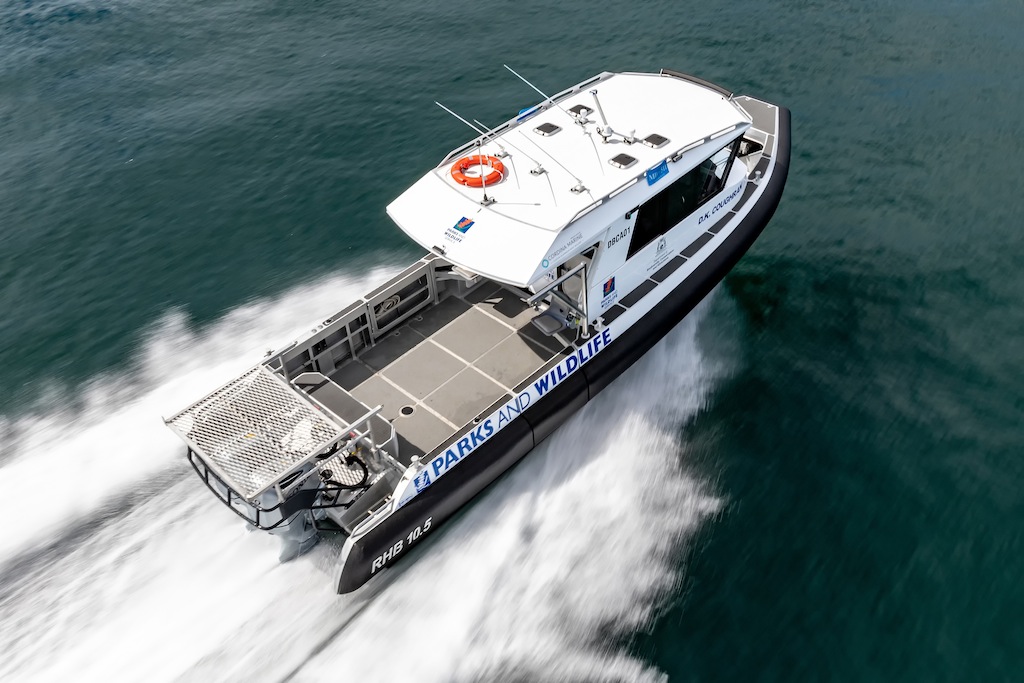 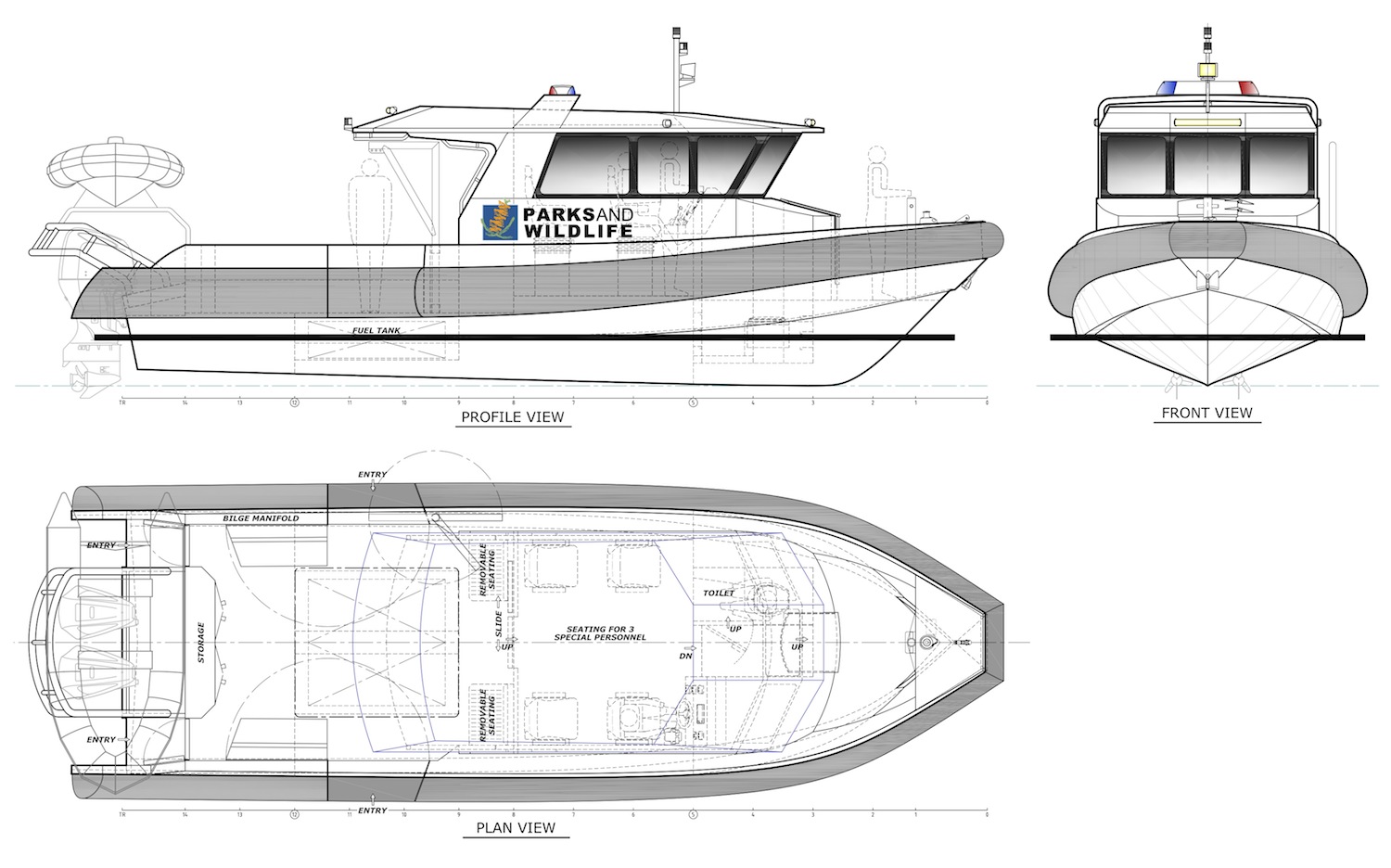