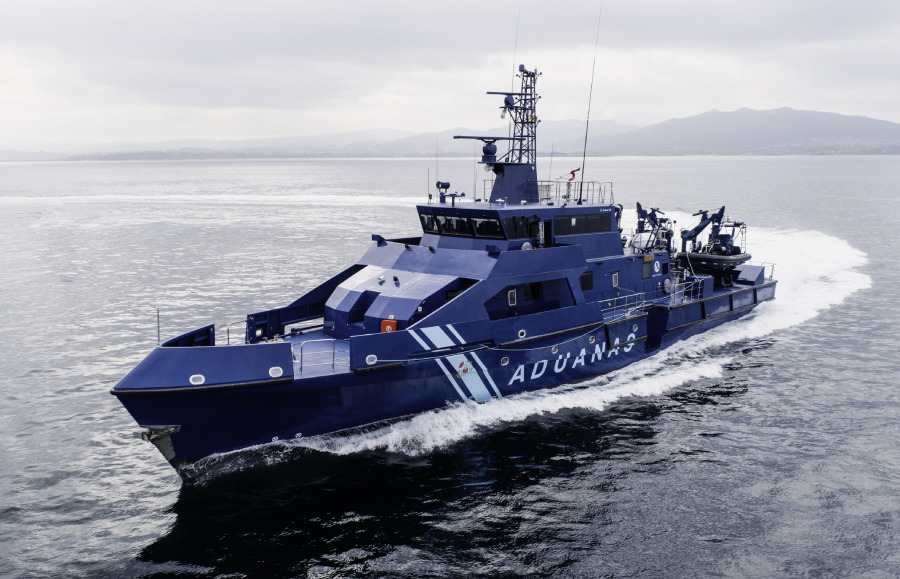 The FRP-hulled Condor has an LOA of 43 metres, a beam of 8.3 metres, a relatively low draught of 1.16 metres, and a displacement of 200 tonnes at full load. Rodman has claimed that the newbuild is the longest FRP patrol vessel to be built in Europe and that it was built with the goal of combining high performance, reliability, durability, and seaworthiness in a single oceangoing platform.

The name Condor was chosen partly as a homage to a series of camouflaged patrol boats that were used extensively by the Spanish government during the 1980s and 1990s. These earlier boats are perhaps best known for their operations during a particularly intense period in the country’s own campaign against narcotics trafficking.

The OPV is designed to perform missions that include maritime surveillance, law enforcement and counter-narcotics patrols, interceptions, humanitarian emergency assistance, firefighting, and search and rescue (SAR) in both territorial and international waters. Despite its “offshore” designation, the vessel is also optimised for coastal patrols.

The crew of 14 are housed in eight cabins though the vessel can accommodate up to 10 additional personnel, such as rescued accident survivors and detained suspects following at-sea arrests. A galley has also been incorporated on board.

A pair of MTU 12V4000M63 four-stroke diesel engines that each produce 1,500 kW drive Teignbridge fixed-pitch propellers via ZF 6000 gearboxes. This configuration enables the OPV to reach a top speed of 23 knots and sail for up to 2,000 nautical miles – which the tax agency has claimed as twice the range of the other patrol vessels in its fleet – at a cruising speed of 16 knots. A Poseidon PT75T side thruster assists in close quarters manoeuvring in port areas and other restrictive waters.

The OPV has also been fitted with a stabiliser system to reduce rolling and pitching both at rest and while underway, as well as to improve performance, fuel economy, and safe operation even under extreme conditions. Manuplas wrap-around fendering is incorporated to better protect the hull when manoeuvring alongside other vessels during at-sea boardings.

For SAR work, Condor is equipped with access points that allow for the easier recovery of accident survivors from the water. A powerful water cannon will meanwhile be used for external firefighting operations.

The OPV’s electronics suite includes Furuno radars, AIS, GPS, and compasses, Icom radios, Jotron GMDSS radiotelephones, and a Simrad autopilot as well as a secure communications system and a specialised optronic system for detecting and tracking other vessels. The deck has also been fitted with a Guerra crane and a davit and set of winches supplied by Fluidmecanica. These and all other onboard systems draw electrical power from a pair of Caterpillar C7.1 generator sets.

The OPV also has deck space for two rigid inflatable boats (RIBs) for use mainly during at-sea boardings and interceptions but also to aid in SAR. In the event of an emergency evacuation, two Safindo life rafts are available for the crew and the other personnel.

Condor is being operated initially on patrols out of Vigo. It will later be assigned to the tax agency’s other areas of responsibility depending on operational requirements. 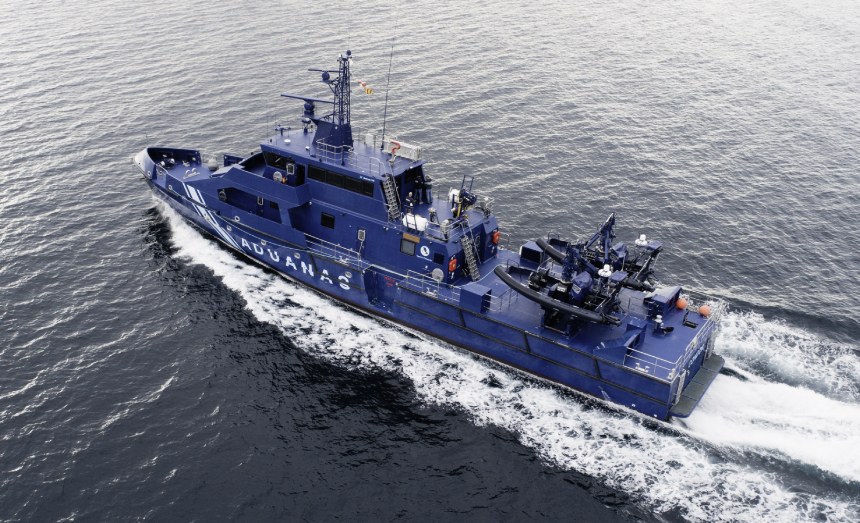