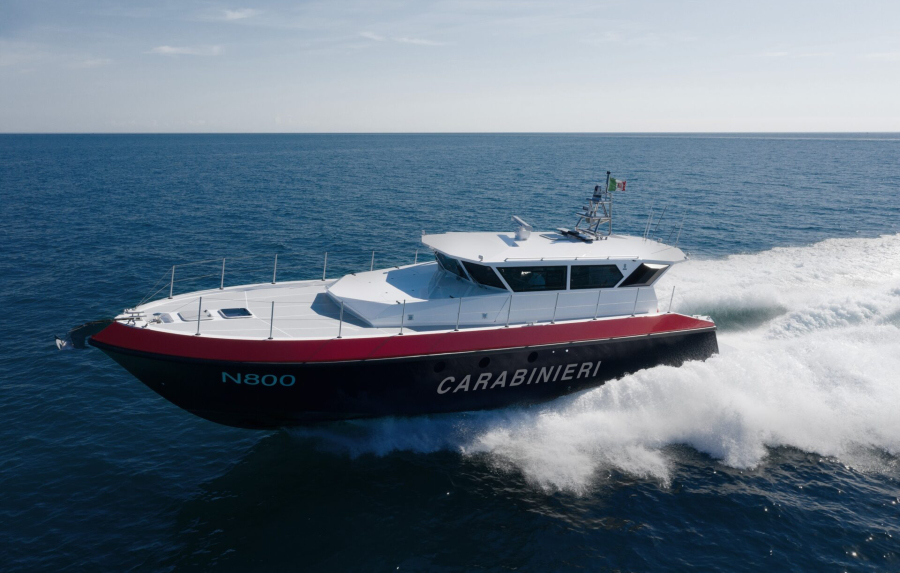 Ferretti, through its Ferretti Security Division (FSD) business unit, was awarded a €16 million (US$19.4 million) contract to supply the new boats after it emerged as the winner of a competitive tender process. Designed according to RINA class rules that cover fast patrol vessels, the boats will be operated primarily in coastal and offshore waters, conducting traditional maritime law enforcement duties as well as environmental protection. The vessels will also be capable of operating even under conditions of sea state four.

The new boat, which has been named Ciriaco Carrù, has an FRP and carbon fibre composite hull, a length of 16.75 metres, a beam of 4.43 metres, a draught of 1.57 metres, and a displacement of 25.5 tonnes at full load.

The propulsion includes two MAN i6 air-cooled diesel engines that each produce 596 kW at 2,300 rpm, ZF gearboxes, 65-millimetre shafts, and four-bladed fixed-pitch propellers. This allows the vessel to reach speeds in excess of 30 knots. Fuel supply is in the form of two tanks with a total capacity of 2,700 litres, and this allows the boat to sail for up to 300 nautical miles at a cruising speed of 22 knots, or stay out at sea for two to three days.

For docking/undocking, the boat features an electric-powered bow thruster.

There is also available space in the engine compartment for the incorporation of a Transfluid hybrid propulsion system wherein the MAN diesels will be augmented by a pair of 75kW permanent magnet electric motors. This means that, should the need arise, the boat can be modified to be capable of operating in areas where stringent environmental protection regulations are being enforced.

The electric motors are to be used for low-speed cruising in such areas as well as harbours, guaranteeing an endurance of one hour at seven knots. These may also be utilised in “boost” mode to supplement the thrust generated by the diesel engines.

Walter Frau, the second boat in the series, will be fitted with the complete hybrid propulsion system. The Carabinieri said the decision to proceed with incorporating a similar installation on the other boats will depend on the propulsion system’s performance during operational sailings.

The vessel’s electronics include radar, sonar, and display screens supplied by Furuno, a 400MHz encyrpted radio, and a gimbal-mounted FLIR camera. These are controlled and monitored from the main cabin, which also has Shoxs shock-mitigating seats for the captain, the coxswain, and the navigator/communications officer. Although the boat is designed to be operated by only these three personnel, the crew complement can be increased to six and 12 passengers may even be accommodated on board.

Power for the electronics will be supplied by a 10kW generator set and an array of batteries.

In fulfilment of Carabinieri requirements, the boat has no fixed mounts for heavier weapons like crew-served machine guns. It instead has an onboard locker for the crew to store their personal weapons.

The cabin also features a desk with four seats. The desk can be folded out of the way to accommodate a stretcher-bound patient during medical evacuation missions.

Onboard accommodations include a crew cabin with four beds, a captain’s cabin with two beds, a toilet with shower, and a galley. All interior spaces benefit from a centralised air-conditioning system with individual temperature controls in each compartment.

The boat is adequately equipped for dealing with emergencies. The vessel has two inflatable liferafts for use by the crew during evacuations while an onboard diesel pump may also be operated as a bilge pump. The pump may even be used to help supply water to a set of fire hoses, giving the vessel limited external firefighting ability.

The vessel also has space for a 3.8-metre inflatable dinghy powered by a 7kW two-stroke outboard.

Ciriaco Carrù has since begun operating out of the Carabinieri station at Lampedusa in southern Italy’s Pelagie Islands in the Mediterranean, replacing the station’s older patrol boat. Sister vessel Walter Frau is scheduled to be handed over within this year.