Baltic Workboats (BWB) has delivered three new 24-metre patrol boats specifically designed and built for German Customs needs. Bremen operates out of Bremerhaven, Gelting out of Flensburg, and Darss out of Rostock/Warnemünde.

The main tasks of Bremen, Gelting and Darss include patrolling and making inspections at sea. The design is a new model in Baltic Workboats’ wave-piercing series, with high performance capabilities in any weather.

Each carries onboard a tender, stowed in the stern, that will be used for shallow water operations, in particular for inspections in yacht marinas. They are Survitec DSB 4.3-metre RIBs with Yamaha F60 FETL.

Length between perpendiculars of the trio is 23 metres, with a moulded beam of 6.2 metres, moulded depth of 2.95 metres and design draught of 1.5 metres. Gross tonnage is 91, with displacement of 56 tonnes and lightweight of 51 tonnes.

The wave-piercing bow design provides a longer waterline length when compared to a traditional hull vessel. In rough sea conditions when the bow becomes submerged, the top surface of the bow creates increased downforce, which compensates for the buoyancy of the bow.

The bow design reduces pitching motions and provides a smoother ride for the captain and crew at all speeds. When compared to a traditional hull, BWB said a wave-piercing hull design provides 40 per cent less vertical acceleration and up to a 30 per cent improvement in fuel economy.

The wheelhouse provides a safe working environment both in the cabin and for the crew on the deck. The wheelhouse offers nearly 360-degree visibility. The captain has a centre position with uninterrupted views of the deck and boarding areas.

The vessels have already started operating in the most demanding conditions in the Baltic and North Sea. They comply with Lloyds Register rules (+100A1 SSC Patrol, Mono, HSC, G3 MCH UMS) and it was a requirement of the owner that they meet the highest quality standards for workboats of that kind including compliance to IMO Tier III.

The propulsion setup comprises a pair of MTU 8V 2000 M72 main engines, each of 720 kW, driving NiBrAl CU3 900mm five-blade propellers via ZF 2000 gearboxes. Aided by Humphree interceptors, this provides for a service speed of 18 knots, maximum speed of 25 knots, and range of 300 nautical miles.

Despite the powerful machinery, the design and interior assembly methods provide effective low vibration and and low noise results, especially for patrol boats. 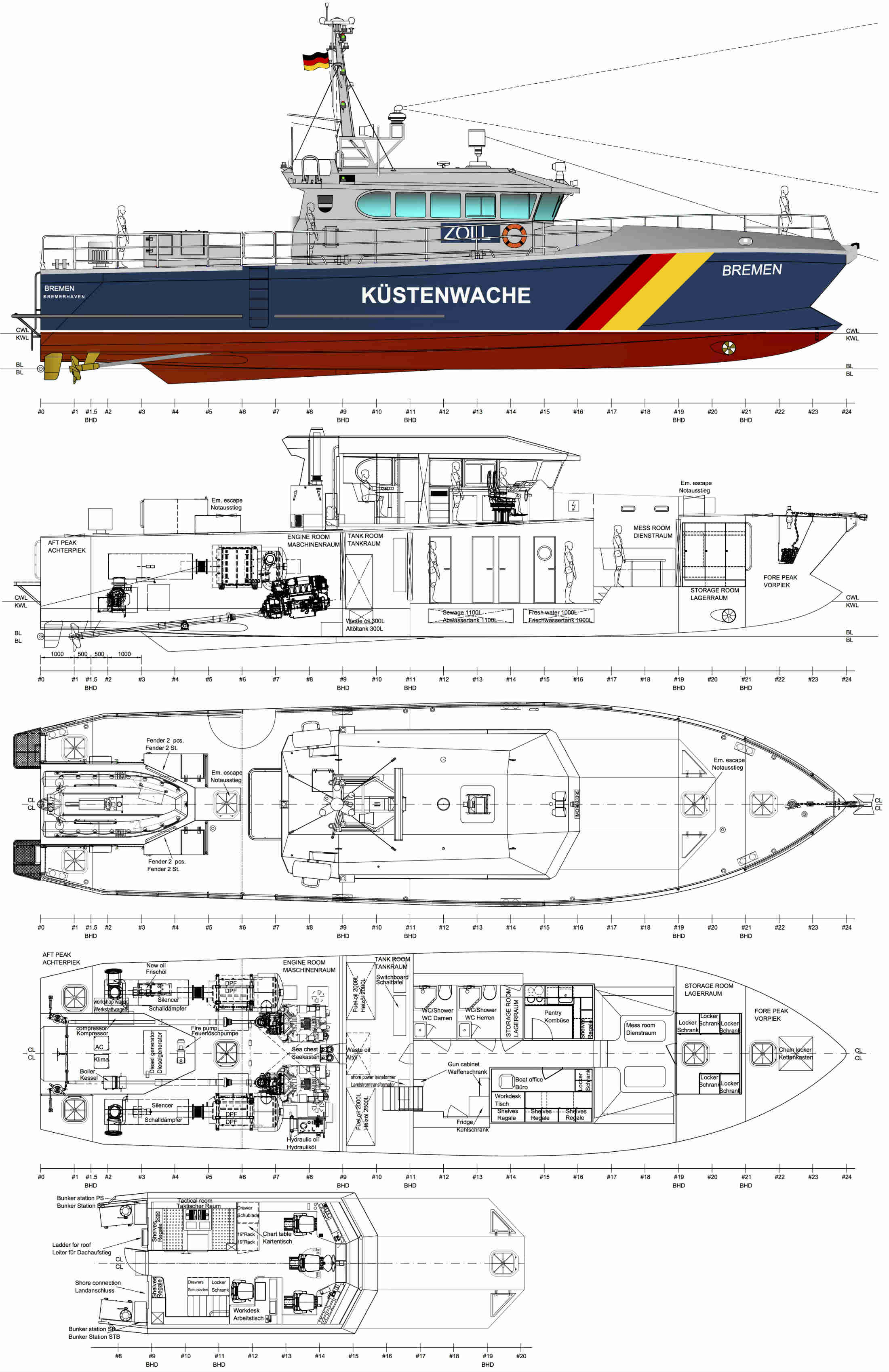