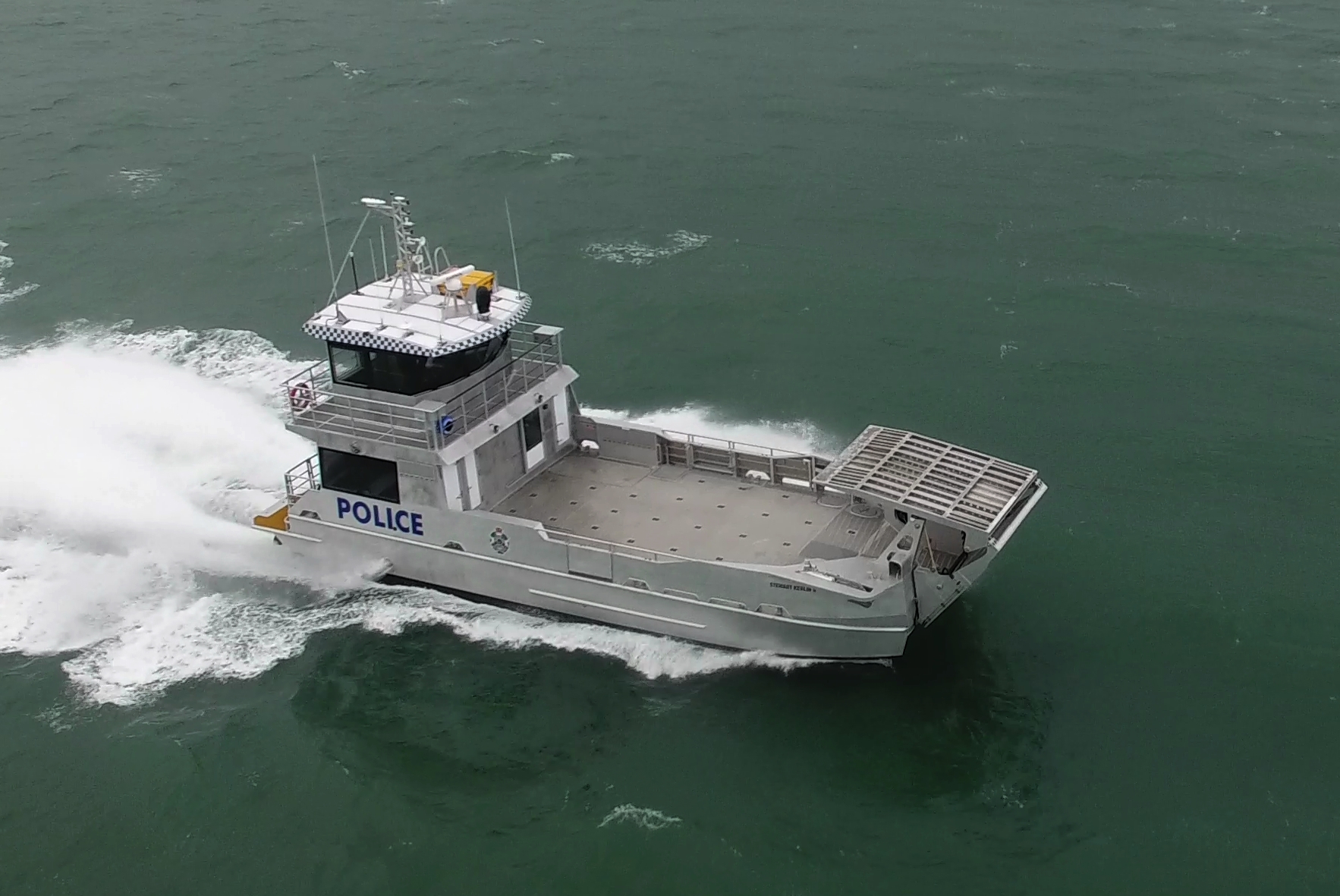 Australia’s Queensland Police Service (QPS) went to tender in March 2017 for the design and construction of a high-speed vehicle barge for the transportation of persons and police vehicles from Redland Bay to the Southern Moreton Bay islands of Macleay, Lamb, Karragarra, Russell and Coochiemudlo.

The vessel replaces an ageing and smaller barge operated by QPS that was unable to adapt to the ever changing operational demands. The new vessel operates under 2D survey, however was required to be built to 2C survey to future proof for extended areas of operation.

The new vessel has been designed to address some of the shortcomings observed with the current vessel by providing increased capacity and an ability to load and transport three vehicles when required, and significantly reduced wash resulting in reduced environmental damage and community concerns.

According to builder Norman Wright and Sons, the biggest challenge in designing and building this vessel was to accommodate the extensive specification into a relatively small and necessarily light design envelope.

The combination of a high level of equipment fitout, including redundant systems, a fixed engine power, and a structure designed and built to 2C survey, provided significant challenges in reducing vessel weight so as to achieve contract speeds and wake requirements.

The vessel designer, One2Three Naval Architects, invested significant time in optimising the structure to produce a successful lightweight design, which was fabricated to a high quality by Lumark Metal Fabrication. 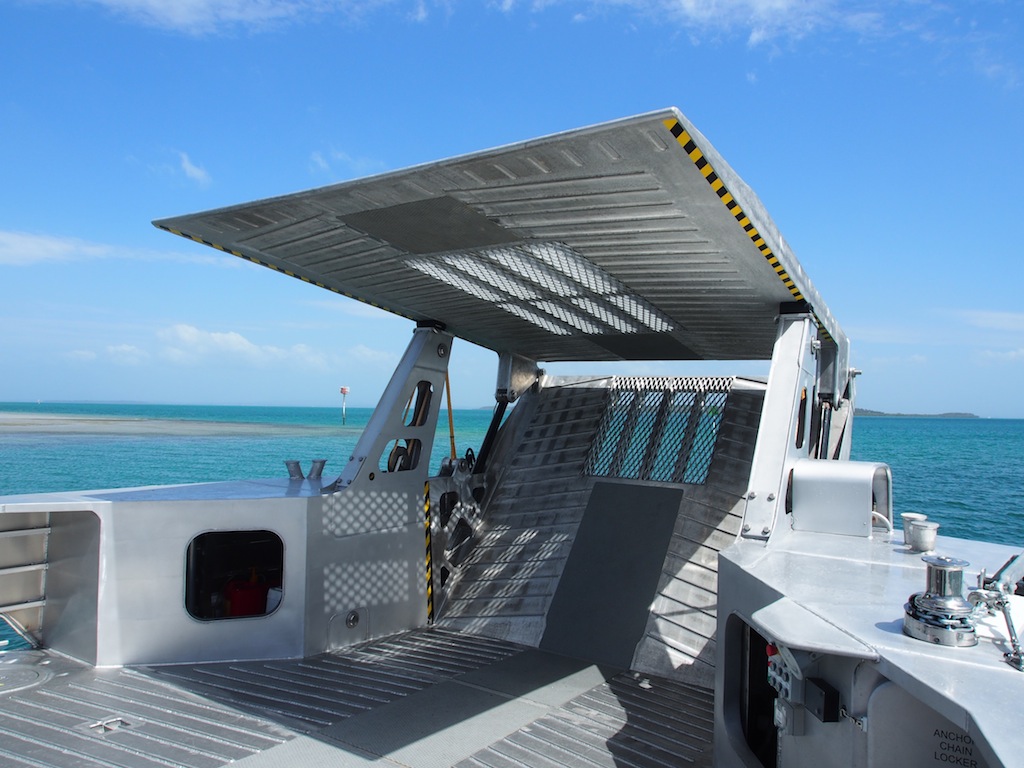 A further challenge was to design and build the ramp structure, mechanisms and controls to ensure a highly robust and rapid acting system. The design was complemented by hydraulic engineering courtesy of Gateway Hydraulics and electronic integration by Ocean Electrics.

The operating area is challenging due the presence of shallow waters, environmentally sensitive areas and the wide variety of loading ramp conditions and angles encountered.

Typical loading requirements of the vessel are two crew, six passengers and two full size four-wheel drives, and in this configuration a cruise speed of 25 knots was called for, with a vessel sprint speed of around 28 knots. 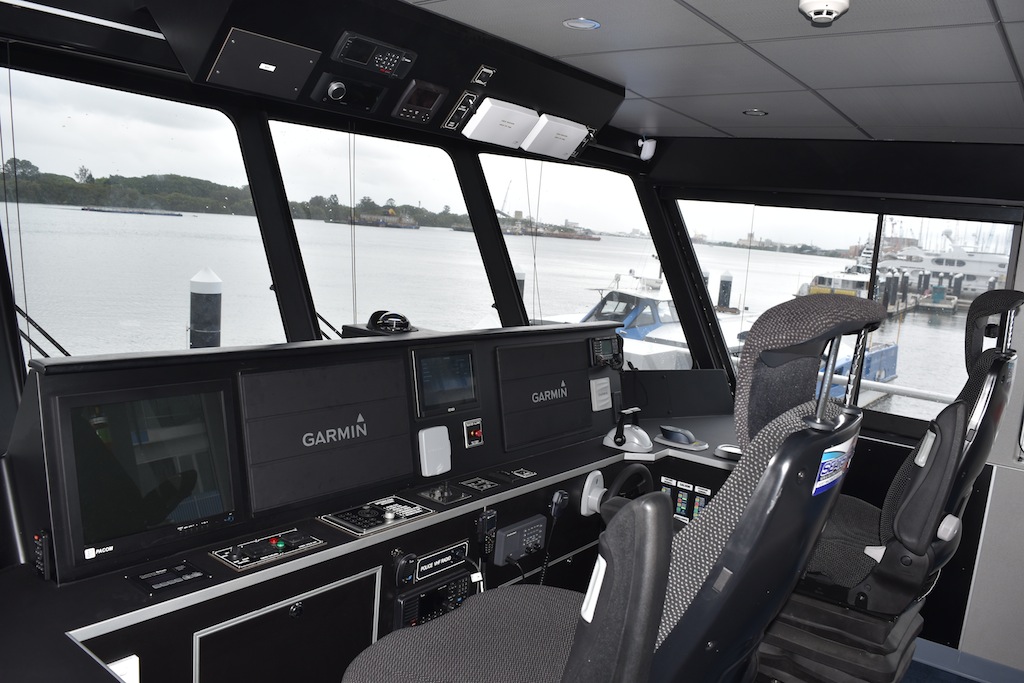 The vessel is also required to accommodate a range of potential uses including marine regulatory enforcement, and to be set up as a “forward command post” (FCP) for major operations on the islands, or for use as an on-scene command vessel for marine search and rescue (SAR).

The vessel is unique in its ability to reliably and quickly deploy large payloads (up to seven tonnes on deck) at high speeds through sensitive and shallow environments to landing locations that are often without dedicated infrastructure.

This is achieved through a combination of lightweight aluminium catamaran design powered by waterjet propulsion, resulting in shallow draught and low wash.

Waterjet propulsion was stipulated by the client primarily for operating safely in shallow waters. A new impeller design by HamiltonJet resulted in high bollard pull and significant manoeuvrability enhancements. 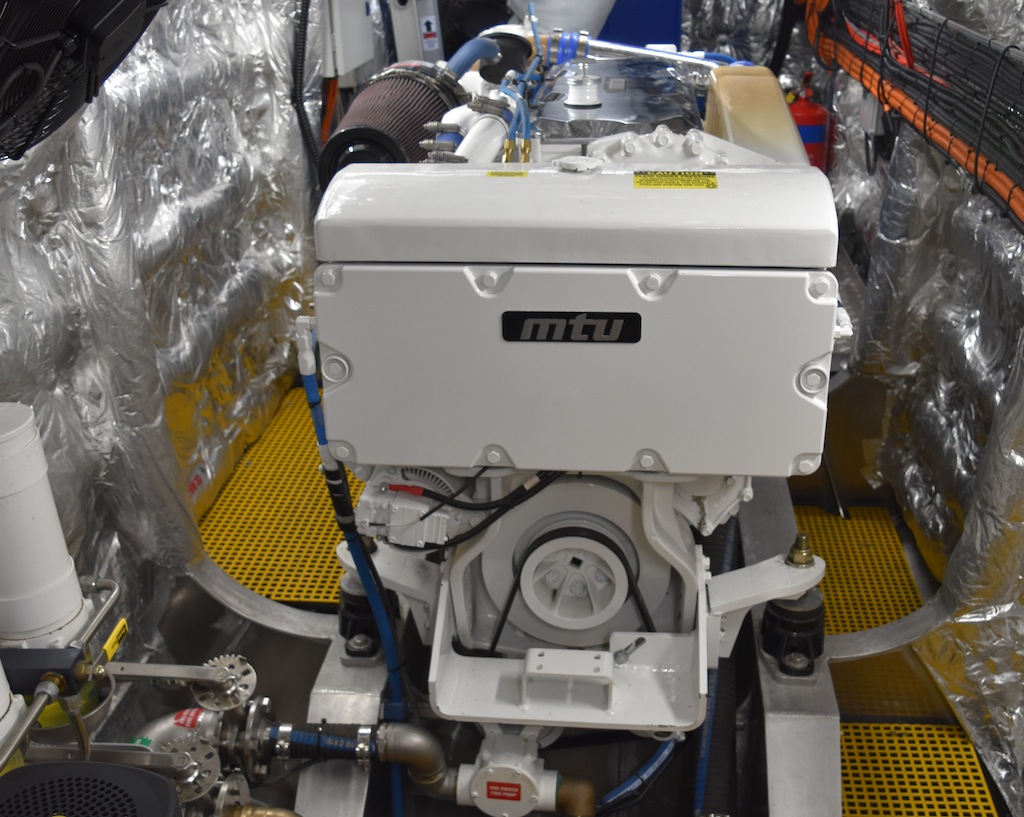 Independent engine rooms each house a main engine and gearbox connected to the waterjet via cardan shaft. The cardan shafts pass through watertight bulkheads to the separate jet rooms.

The vessel is distinguished by a robustly designed, two-stage, hydraulically actuated folding loading ramp with position sensing. The three-phase hydraulic power pack has been upsized to ensure rapid deployment of the ramp.

Redundancy is provided by a 24V power pack driven from an emergency battery bank, ensuring the vessel can retrieve the ramp and return safely to base in the event of three-phase power failure.

The vessel also features a detention/holding cell and a separate firearm/equipment locker built to QPS standards. 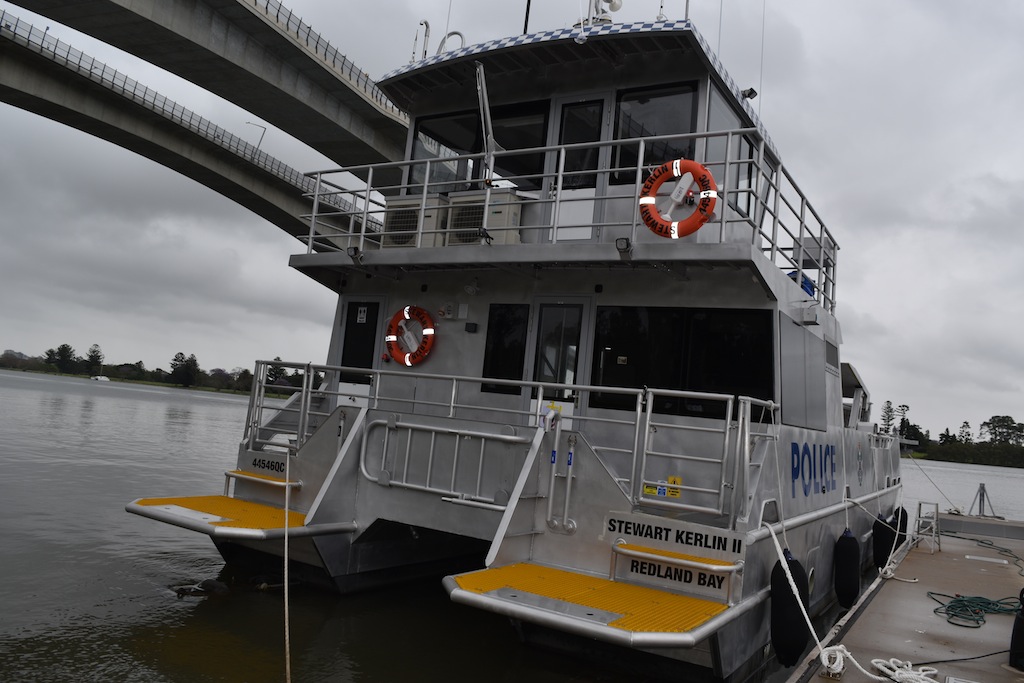 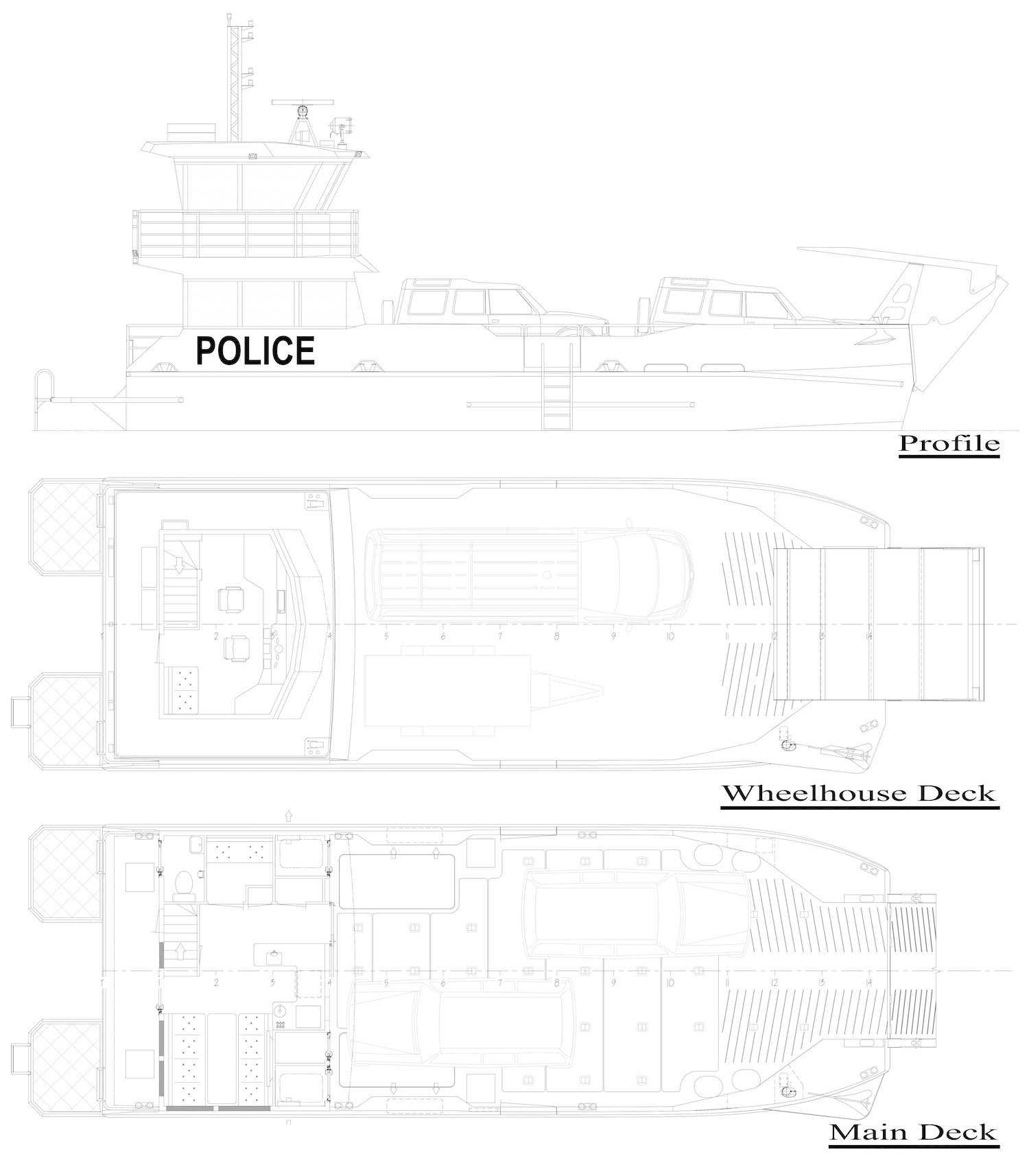