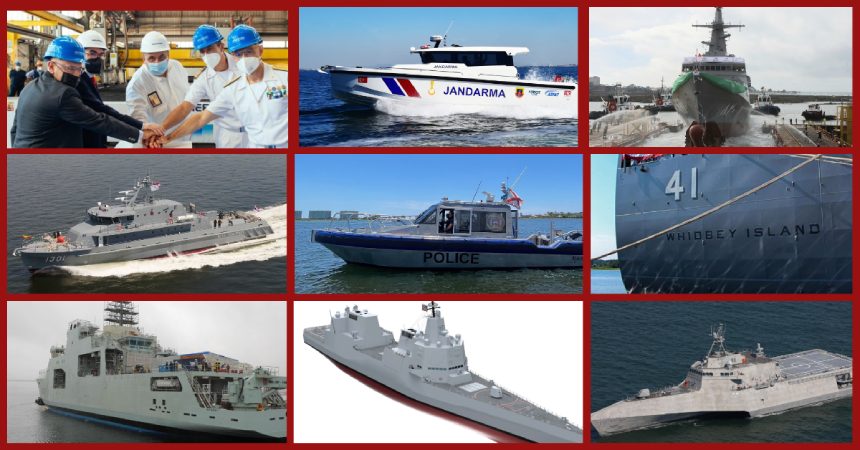 New patrol boats were recently delivered to the Royal Thai Police and a law enforcement agency in Alabama. A new navy ship enters service with Saudi Arabia and construction starts on a logistical support vessel for Italy. The US Navy retires one of its oldest active amphibious ships but takes delivery of a newbuild surface combatant and places orders for additional floating assets for delivery within the next two decades.

Chai Jinda measures 42 by 7.9 metres and is crewed by 22 personnel. Three MTU 16V2000 M86 engines drive fixed-pitch propellers to deliver a maximum speed of 35 knots and a patrol speed of 20 knots.

The boat also has a forward weapons mount for a 30-millimetre autocannon as well as a firefighting monitor.

The all-weather-capable Marine 1 measures 38 feet (11.5 metres) long and is powered by three Mercury outboards. The electronics suite includes a radar and a rotating thermal camera.

The boats are the sixth and seventh in a series to be supplied to the gendarmerie. Each vessel has a length of 10.2 metres, a beam of 3.2 metres, a draught of 0.55 metres, and space for three crewmembers.

Two outboard engines will deliver speeds in excess of 35 knots.

Austal USA has handed over a new Independence-class littoral combat ship (LCS) to the US Navy.

The Royal Saudi Naval Forces will commission its newest frigate in a ceremony at the San Fernando facilities of Spanish shipbuilder Navantia on Tuesday, July 26.

Al-Diriyah is the second of a planned five Al-Jubail-class frigates being built by Navantia for Saudi Arabia. The frigates are variants of the Avante 2200 series.

Italian shipyard Fincantieri has cut the first steel for the second logistic support ship (LSS) in a series slated for the Italian Navy.

The vessel will have electric motors, low-emission generators, and biological waste control systems. Its secondary functions will include humanitarian assistance and disaster relief.

Delivery of the second LSS is scheduled for 2025.

Irving Shipbuilding has begun conducting sea trials of the future HMCS Max Bernays, the second Harry DeWolf-class Arctic and Offshore Patrol Ship (AOPS) that the company is building for the Royal Canadian Navy.

The trials are being carried out in Halifax Harbour just off Irving’s Halifax Shipyard facilities in Nova Scotia.

The 103-metre vessel was designed in compliance to IACS Polar Class 5. A diesel-electric propulsion system consists of four 3.6MW diesel engines that supply electrical power to two 4.5MW motors to deliver speeds of 17 knots in open water and three knots for icebreaking.

Once delivered, the future Max Bernays will be assigned to Maritime Forces Pacific, making it the first AOPS to operate primarily off Canada’s western coast.

The US Navy formally retired the dock landing ship (LSD) USS Whidbey Island in a ceremony on Friday, July 22.

The lead ship of its class, Whidbey Island entered service in February 1985. Its notable deployments included Operation Desert Storm in 1991, Operation Uphold Democracy in 1994, and various cruises in support of Operation Enduring Freedom from 2002 to 2007.

Like its sisters, the LSD has capacity for four air-cushion landing craft (LCACs) or 21 LCM-6 medium landing craft and up to 400 embarked marines.

Austal USA has been awarded a US$156 million fixed-price incentive contract option from the US Navy for the construction of two Navajo-class towing, salvage, and rescue ships (T-ATS). With the award, the company is now under contract for four T-ATS, having received awards for T-ATS 11 and 12 in October 2021.

The ocean-going tug, salvage, and rescue ships will be designed to support the navy’s fleet operations. Each T-ATS will have a multi-mission common hull platform capable of towing heavy ships.

The vessels will be capable of supporting a variety of missions including oil spill response, humanitarian assistance, search and rescue (SAR), and surveillance.

General Dynamics Bath Iron Works (BIW) has been awarded a contract by the US Navy to provide shipbuilder engineering and design analysis to produce design products in support of the preliminary and contract design for the navy’s DDG(X) guided missile destroyers.

The design effort for DDG(X) will involve a collaborative navy-industry effort composed of the large surface combatant shipbuilders, suppliers, ship design agents and other subject matter experts. A similar award was also made to Huntington Ingalls Industries (HII), according to a recent announcement from the navy.

If all options are exercised, the contract will continue through July 2028. Fiscal Year 2022 Research, Development, Test and Evaluation (FY22 RDT&E) funds were obligated at the time of award.