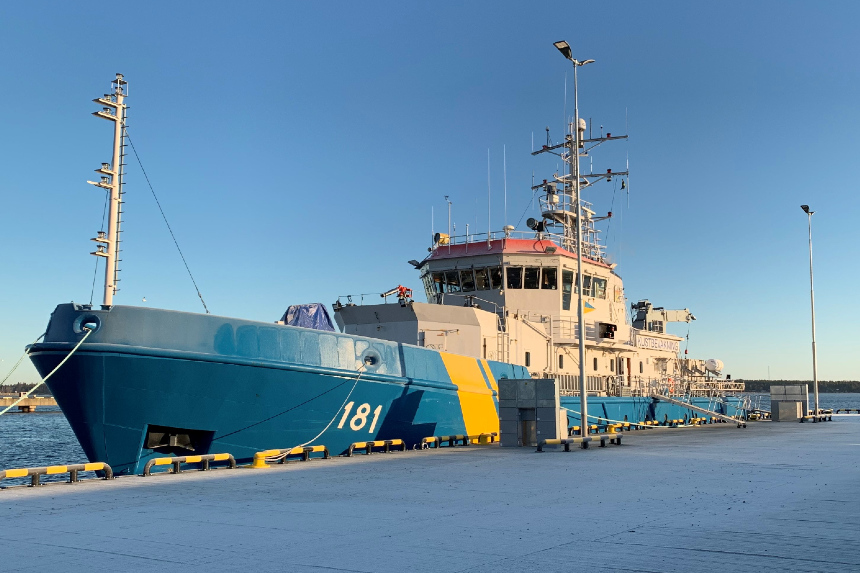 Damen Shipyards Group subsidiary Damen Oskarshamnsvarvet has been awarded an engineering, procurement, and construction (EPC) contract by the Swedish Coastguard (Kustbevakningen; KBV), for the modernisation and modification of the patrol vessel KBV 181. Originally built as a patrol boat, the vessel is expected to also be able to perform research support and oil spill recovery duties following an extensive refit programme in Oskarshamn, Sweden.

Were there any factors or events that made the Swedish Coastguard decide that the patrol vessel KBV 181 needed to have these secondary capabilities?

TL: Fortunately, there had not been any specific events like an oil spill accident that dictated the KBV’s need for a vessel that is designed specifically to perform oil spill response functions. The decision for the refit was instead the result of a long-term gradual change in focus by the KBV towards environmental monitoring and protection. The change in focus began in 1989, when the vessel was originally built.

The KBV today operates a fleet of combination patrol and oil spill response vessels that KBV 181 will be part of upon completion of the refit.

What capabilities and equipment will be added to the vessel? In which areas is it expected to perform its new oil recovery mission?

TL: The main additional capability will be oil spill recovery, both in open water and in ice. The vessel will also have the capability to store oil and improve oil transfer function. It will thus be equipped with a modern bridge suitable for this new purpose as well as improved equipment handling with three new cranes.

The aft deck will be rebuilt in order to accommodate additional equipment such as containment booms and high-speed sweep systems that can be launched through the new aft deck gate/ramp. Lastly, the vessel will have a single dry and wet laboratory that could accommodate multiple research applications since the existing onboard facilities that were used for this purpose were limited.

The KBV will continue to operate the vessel in the Gulf of Bothnia the northern Baltic Sea upon completion of the refit.

Will the added equipment necessitate any significant changes to the vessel’s hull, superstructure, systems, etc? What impact will the changes have on the vessel’s service life?

TL: The only major hull modifications are those that will be made above the waterline in the region of the aft deck. The KBV had specifically requested that no modifications be made to the rest of the hull since the vessel already performs well in both the open sea and in ice.

Our team expects that, in besides guaranteeing the added capability, the refit will add at least 15 years to KBV 181‘s service life. This means that the vessel would have a total of 45 years or more in operation with the KBV.

Did the Damen team encounter any challenges in incorporating a new, significantly different capability (and associated equipment) in a vessel originally built to serve another purpose (i.e. patrol)? How were such challenges overcome? Were there any aspects of the vessel’s original design that made it easier for the team to incorporate the required oil recovery equipment than what is otherwise possible?

FW: We are fortunate that the coastguard had already carried out extensive engineering studies prior to tendering the project to make sure that the equipment that the vessel would need for its new roles would actually fit. Nonetheless, we are working with limited boundaries in terms of space, weight, required power, etc, and so we require a certain amount of flexibility from our engineers and their designs throughout the duration of the project.

TL: Even before the decision was made to have it undergo the refit, the vessel had already been operated jointly by the coastguard and Swedish science agency Umeå Marine Forskningscenter (UMF) for research and environmental monitoring missions in the Gulf of Bothnia. In this respect, the vessel is being used primarily to collect samples of the water and the sediment from specific areas of the gulf so that the changes in its composition that take place over time can be identified.

There are even instances when guest scientists from other local agencies are invited aboard so they could carry out their own research expeditions using the the vessel and its onboard facilities.

To be able to accommodate the additional scientific equipment and thus be more capable of carrying out research expeditions, the vessel will have a permanent dry and wet laboratory onboard following the refit.

What lessons did the Damen designers learn from this project? Could those same lessons be applied in other vessel modification/conversion projects for other customers?

FW: We understand that this is a rather unique project which is not likely to repeat itself anytime soon. However, the setup of the oil recovery equipment in combination with class requirements for notation “oil recovery vessel for oil with a flashpoint above 60 degrees” was a rather interesting study and we are hoping to be able to implement the knowledge that we gained here on all of our future projects.