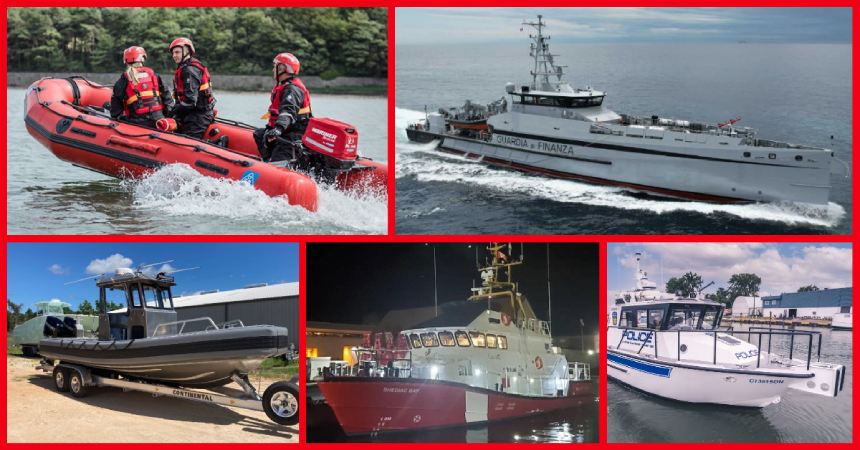 Newbuild patrol vessels have been delivered to law enforcement agencies in Italy and the US state of Florida and the Canadian Coast Guard places a locally-built rescue boat into service. A regional police department in Ontario, Canada, resumes operational sailings of one of its existing vessels following upgrade works at a local yard. Finally, a UK equipment manufacturer unveils a new series of inflatable boat capable of rapid response, especially in areas hit by flash flooding.

The Damen-designed Osum will serve as the GdF’s newest flagship. It measures 60 metres long and is powered by a hybrid diesel-electric propulsion system that delivers a maximum speed of 26 knots and a range of 2,000 nautical miles at a cruising speed of 18 knots.

The vessel will be used primarily for law enforcement patrols and emergency response missions on the St. John’s River.

The Canadian Coast Guard has formally welcomed a new locally-built search and rescue (SAR) boat into service for operation in the waters of New Brunswick.

CCGS Shediac Bay was acquired by the Canadian government in May 2022. It can operate up to 100 nautical miles from shore and can maintain a maximum 30-minute state-of-readiness, which means it will be ready to respond as soon as an alert is received.

The new boat was built by Hike Metal Products of Ontario.

Hike Metal Products has completed incorporating upgrades on a patrol boat operated by the Peel Regional Police of Ontario, Canada.

The boat’s hull also underwent sandblasting prior to the application of new livery.

Based on military-grade technology, the seven-person, 4.2-metre-long boat is unique in that it can be rapidly inflated using just one nine-litre, self-contained carbon air cylinder. The boat is lightweight and is easily deployed, handled, and operated to the criteria of DEFRA.

The boat has a maximum payload of 903 kilograms. It is designed for rescues in fast flowing waters and areas prone to flash flooding.

Any damage to valves can be easily replaced using a simple hand tool.