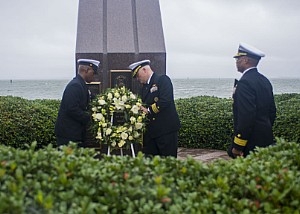 Crew, families and friends of those who served on guided-missile destroyer USS Cole (DDG 67) gathered to commemorate the 17th anniversary of the ship’s bombing, with a wreath-laying and roll call of heroes at Naval Station Norfolk.

The remembrance ceremony honoured the 17 shipmates who died in the attack. Deployed to the Middle East, Cole stopped briefly for refuelling at the port of Aden, Yemen. Unknown to security, a small boat with terrorists came alongside the ship and detonated a bomb at 11.18am.

The explosion created a 12-metre by 18-metre hole on the port side of the ship, claimed the lives of 17 sailors and injured 39.

Cole‘s sailors fought fires and flooding for the following 96 hours to keep the ship afloat.

“The memories of that day are unforgettable … as we pause to honour our lost shipmates and celebrate the lives they lived, let us also remember who they were. They were parents, sons, daughters, uncles, aunts, cousins and friends. They were United States Navy sailors, forward deployed, who volunteered to serve our nation and defend our freedoms when they were attacked,” said Wilson. “It is that service and their sacrifice, that we honour here today.”