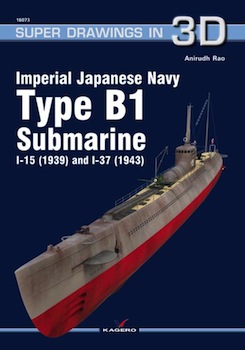 Another in the excellent Kagero Publishing series of detailed reviews of famous historic warships. This first rate publication describes the large, fast and potentially very capable submarines developed for the Imperial Japanese Navy that were, unfortunately for the IJN, poorly commanded, fought and directed and, thus, largely wasted during World War II.

The IJN was forced to build large submarines because the Washington Treaty disadvantaged the Japanese, as far as surface ships were concerned, in the 1920s and thirties. Also, the Japanese had been impressed by the performance of German submarines in World War I. So, during that period, it developed a fleet of twenty of these impressive, long-range craft. They are very well described in words and drawings in this typically excellent Kagero Publishing review.

With a surfaced displacement of 2,584 tons and length of 109 metres, they were large boats for their time. They were also fast, capable of 23.5 knots surfaced and eight knots submerged. Their range was a very useful 14,000nm on the surface at 16 knots. They were well armed with 17 torpedoes, 14 cm and 25 mm guns. Unusually, they carried a seaplane in a hanger on deck. Modern versions of them would seem to be still appropriate for Indo-Pacific operations eighty years later.

Sixteen were built from 1938 to 1941 and they were intended as long-range reconnaissance ships. While they were present during the Pearl Harbour and Aleutian attacks, they were not operated sufficiently aggressively. That doctrine was followed throughout the war so that their achievements never matched their great potential.