Austal Australia has delivered a new patrol boat to the Australian Department of Defence (DOD).

The future HMPNGS Rochus Lokinap was then handed over to the Papua New Guinea Defence Force (PNGDF), making it the second unit in a planned four Austal-designed and -built Guardian-class patrol boats to be delivered to Papua New Guinea under the Australian government’s Pacific Patrol Boat Replacement (PPBR) Project, which also benefits 11 other small Pacific island nations. Under the same AU$280 million (US$216 million) contract signed with the Australian government, Austal will provide through-life support for Rochus Lokinap and its sister vessels at its service centre in Cairns in northern Queensland.

Classed by Lloyd’s Register, the steel monohull patrol boat honours Brigadier General Rochus Lokinap, who served as the commander of the PNGDF from 1987 to 1992. It has an LOA of 39.5 metres, a beam of eight metres, a draught of 2.5 metres at full load, and space for 23 crewmembers. Rochus Lokinap and sister vessel HMPNGS Ted Diro, which was delivered by Austal in late 2018, are currently the largest patrol vessels in the PNGDF fleet and the service’s second-largest vessels after its three ex-Royal Australian Navy 44-metre Balikpapan-class landing craft.

One noteworthy aspect of Rochus Lokinap and all other Guardian-class boats is the significant use of commercial off the shelf components in their construction, particularly the onboard electronics and navigation equipment. This allows for ease of maintenance and operation by the PNGDF and the other Pacific island defence and law enforcement agencies included in the PPBR project.

As with its Guardian-class sisters, Rochus Lokinap is powered by two Caterpillar 3516C main diesel engines that each produce 2,000 kW at 1,600 rpm. The engines drive a pair of fixed-pitch propellers via ZF 76000 gearboxes with trolling valves to deliver a speed of 20 knots at 100 per cent MCR and a range of 3,000 nautical miles at a cruising speed of 12 knots. This enables Rochus Lokinap to carry out maritime sovereignty patrols for extended periods offshore as well as secondary missions that include search and rescue (SAR) and anti-illegal fishing operations in direct support of the PNG National Fisheries Authority.

The engines also feature electronic control to ensure fuel-efficient operations. Also, the number of fuel tanks was deliberately kept to a minimum to make the fuel system arrangement as simple as possible.

Austal had even ensured improved access to and within all voids and bilge spaces for easier inspections and maintenance.

The vessel is designed to be equipped with an assortment of automatic weapons, though the standard configuration will include a pair of 12.7-millimetre machine guns on the flanks and a 30-millimetre autocannon on the foredeck. There is also an open aft deck with an area of 16 square metres for transporting additional personnel or cargo.

The onboard communications suite includes VHF/DSC radios, MF/HF DSC radios, a VHF aeroband radio, a UHF military radio, and a VHF radio direction finder. For navigation, the vessel relies on an X-band radar, an electronic chart plotter, a GPS, and a gyrocompass. Other electronics include a depth sounder and an autopilot.

The vessel also features an integrated stern launch and recovery system for one rigid hull inflatable boat (RHIB) for use in at-sea interceptions and boardings as well as a SOLAS-approved, outboard-powered fast rescue boat that can accommodate 15 people. 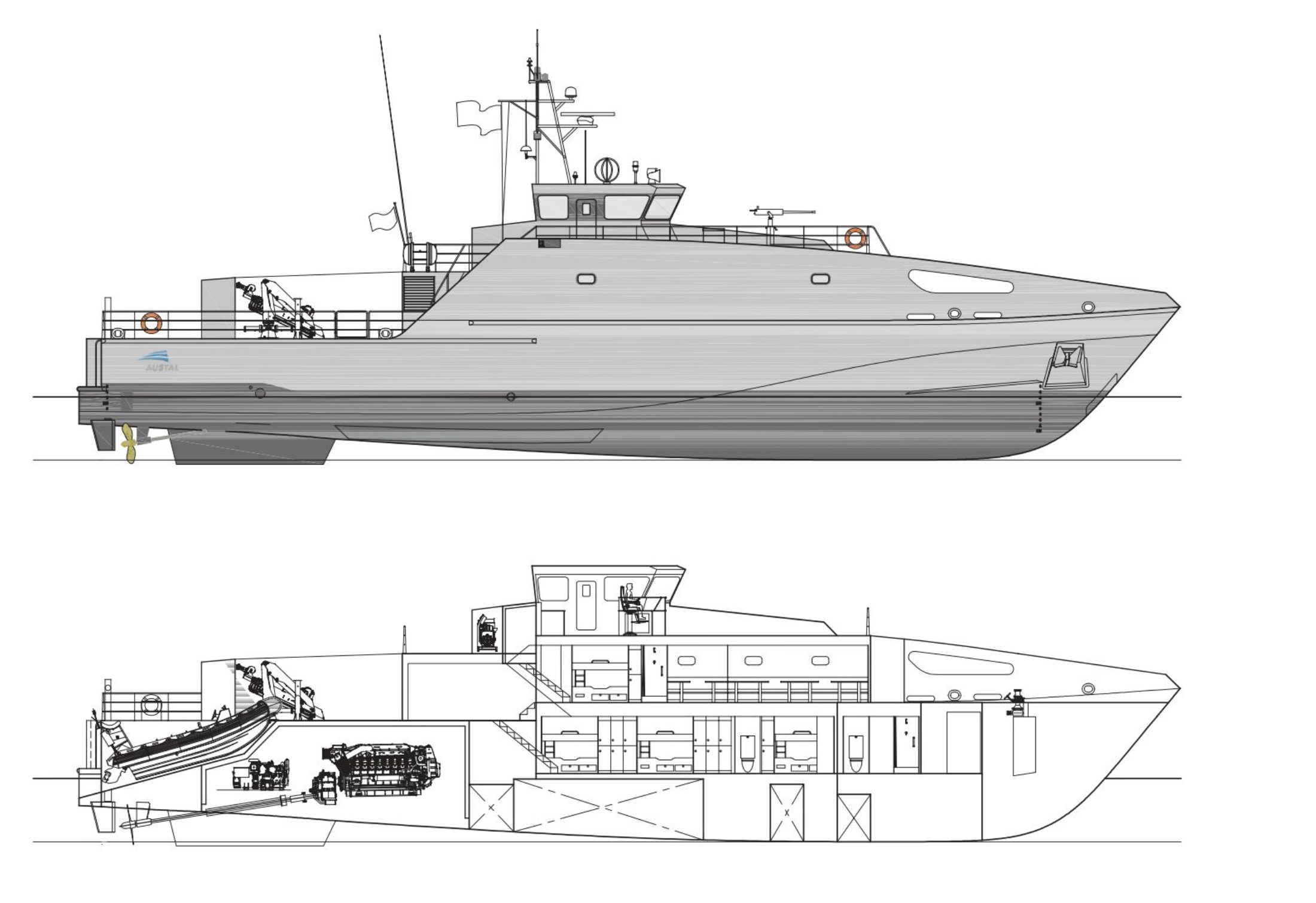 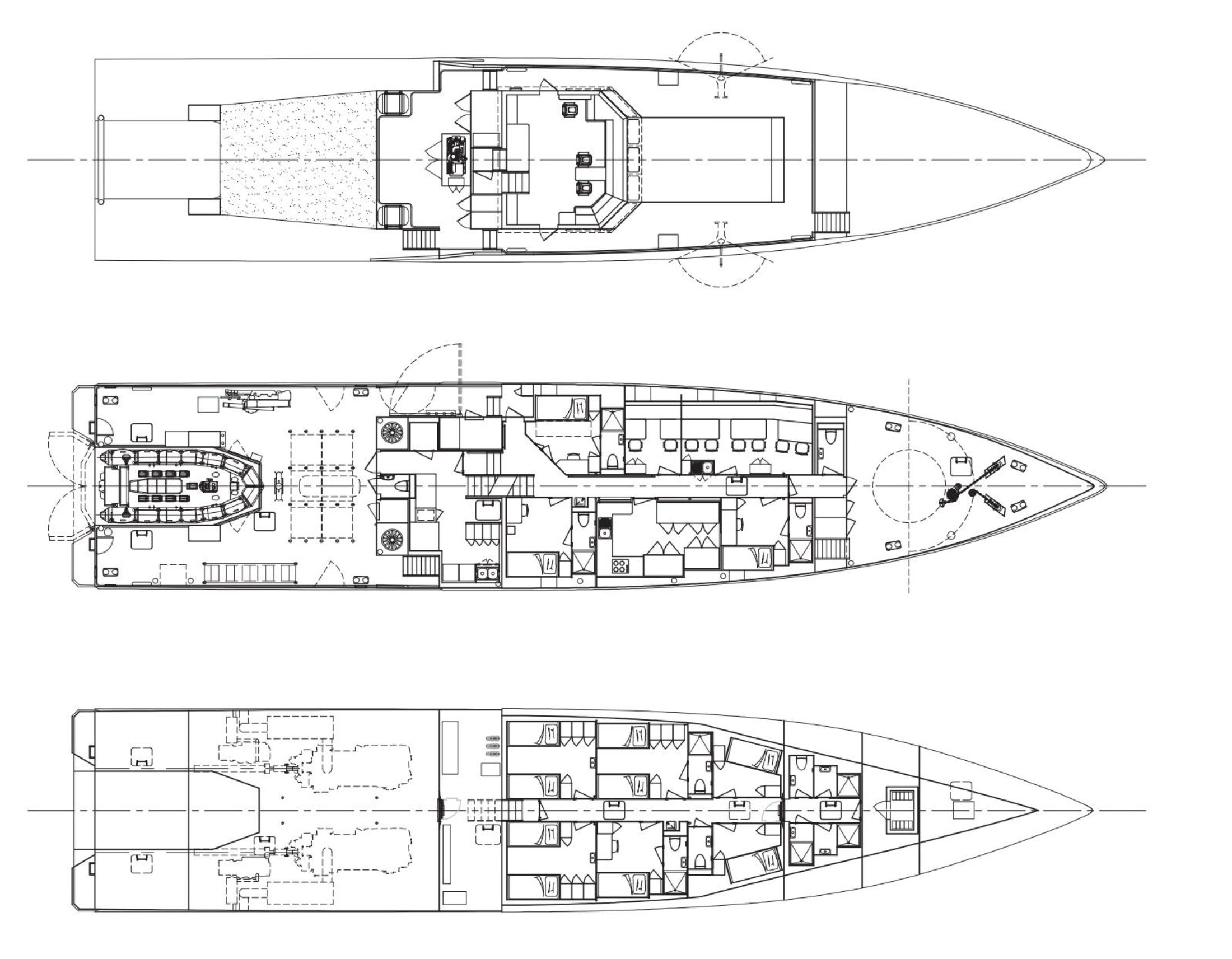