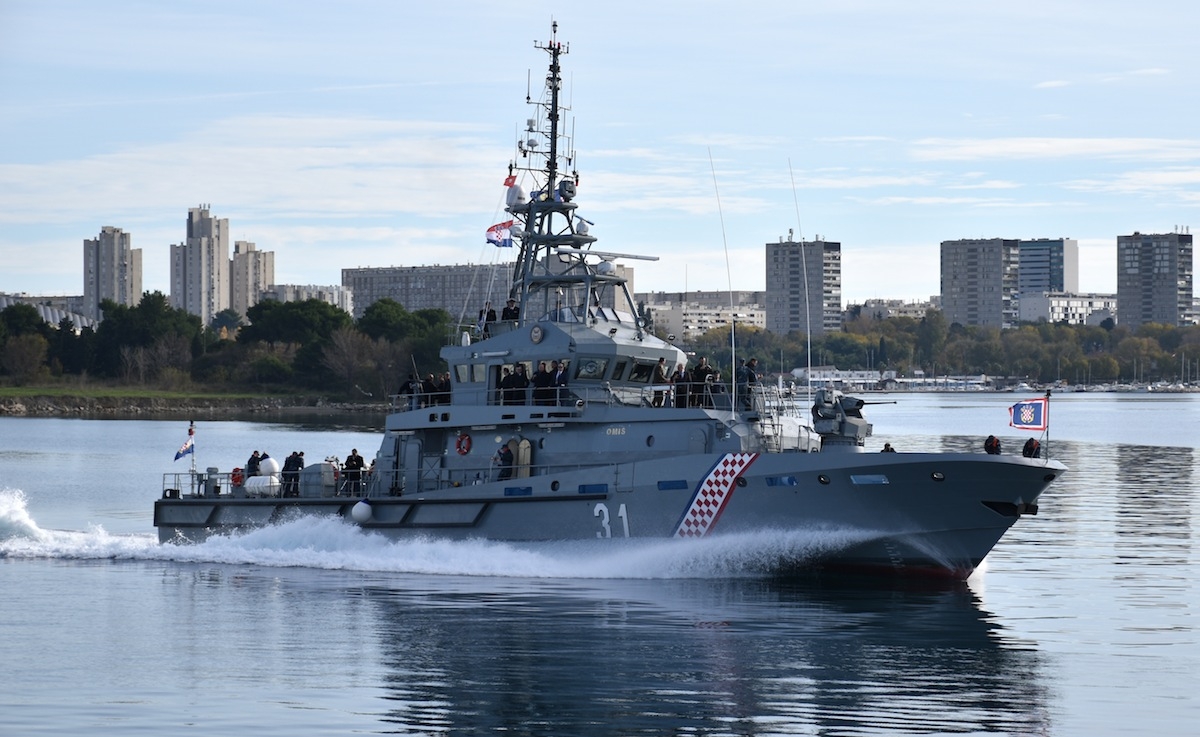 Defence Minister Damir Krstičević emphasised that the vessel, built by local shipyard Brodosplit, would significantly upgrade Croatia’s defence capabilities for the security of the Adriatic Sea.

“The new coastal patrol vessel will enable Croatia’s coast guard to perform its tasks the same as the modern world coast guards,” said General Mirko Šundov. “By completing the first of the five planned coastal patrol vessels the Croatian Navy has acquired new capabilities. Omiš is a Croatian product, the result of enormous efforts and knowledge of Croatian experts.”

Croatian Navy Commander Commodore Ivo Raffanelli underlined the extensive tests preceding the handover. All appliances and systems repeatedly underwent thorough tests, to get an insight into the vessel’s condition. Omiš is currently undertaking a five-month second testing phase, during which the vessel will be tested to the limits to certify that it fulfils the strict tactical and technical requirements. 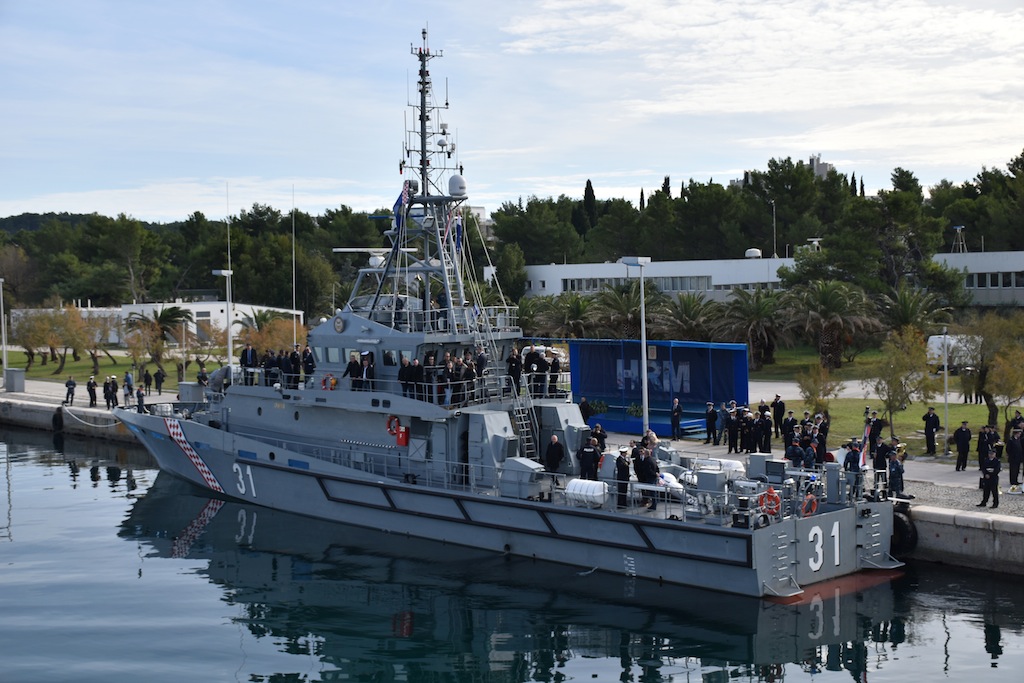 The main purpose of the vessel will be patrolling for control and protection of the interests of the Republic of Croatia at sea, as well as providing support to the numerous island populations, and search and rescue at sea. In the event of war, the vessels may be used for the protection of internal waters and for combat and logistics support.

The CPV is based on the technologies, methods, and experiences of the proven designs used by the Croatian Navy in recent decades. The navy believes smaller patrol vessels are more efficient than larger ones.

The adaptable design was made with the export market in mind, and can be changed according to individual customer needs, ensuring they can meet the operational requirements of navies around the world. 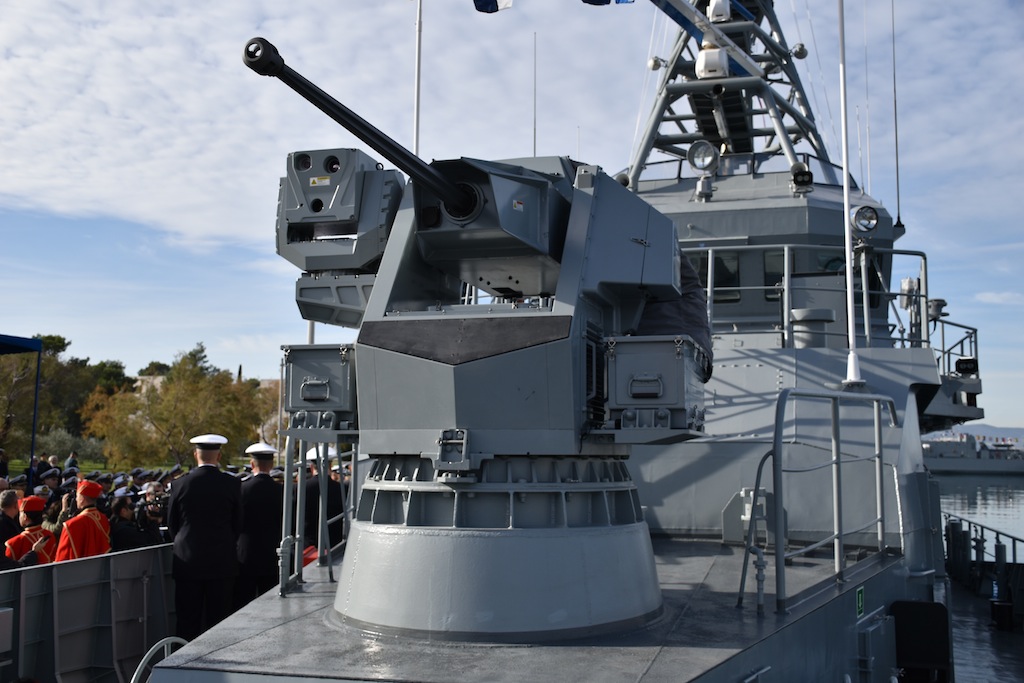 A stabilised turret enables the line-of-sight of the gun to be aimed at the target at all times. Due to the stabilisation feature, the system can perform precise firings against stationary or moving targets while the platform is on the move.

Two 360° pedestals for 12.7mm machine guns, situated starboard and portside on the superstructure, provide full coverage with the same level of protection assured by the open bridge wing structure.

An electric-optical surveillance (EOS) system for observation, search and the recognition of targets at sea and in the air, and weapons control, is also installed. It contains a thermal camera (3-5μm cooled thermal imaging, with 640 by 480-pixel resolution), day camera (minimum 20x optical zoom, 640 by 480-pixel resolution) and laser range finder (range: 100 to 20,000 metres, accuracy ± 5 metres, divergence less than one mrad).

NCB protection of the crew is via the ship decontamination station and so-called citadel protection systems (spaces in the superstructure and hull from FR 23 to FR 50 can be hermetically closed and fitted with a filtrated NCB ventilation system).

In order to protect the outer superstructure and hull plates from contamination, the ship is fitted with a sprinkler system. When NCB protection is activated, all inlets and outlets are closed automatically using gas proof dampers. 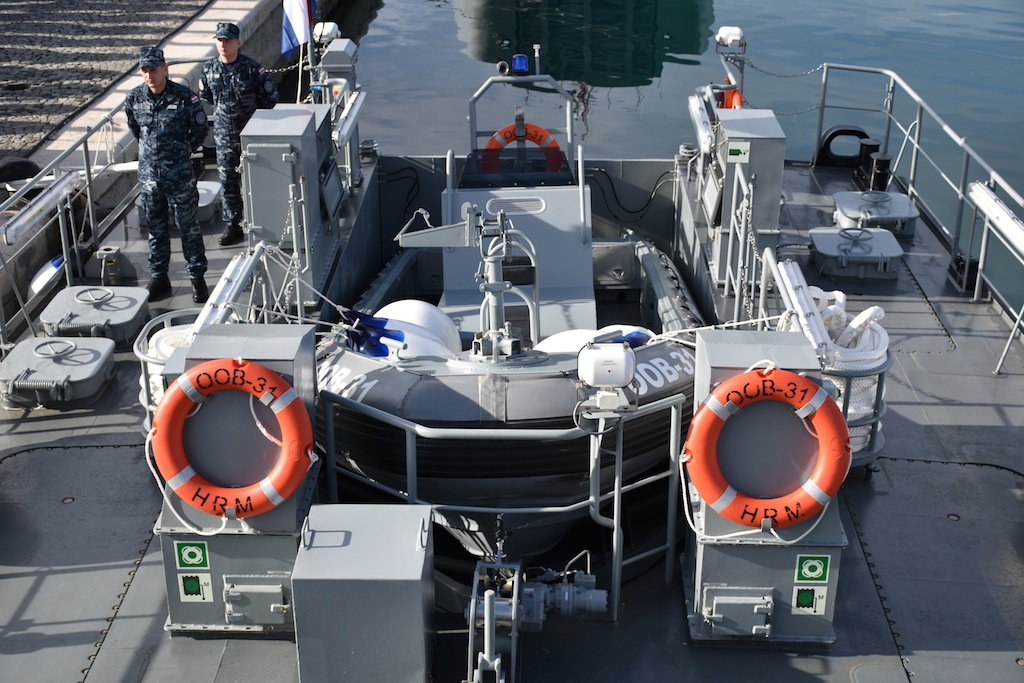 The accompanying fast intervention RHIB is equipped with an inboard diesel engine with waterjet propulsion, which enables speeds of up to 40 knots with six crew onboard and a range of 60 nautical miles.

The aluminium-hulled vessel is 7.7 metres long, has jockey seats for six, light machine gun mounting possibility, and navigational lights and equipment according to COLREG 72. It can be launched and recovered rapidly in conditions up to sea state 3 and ship speed up to five knots.