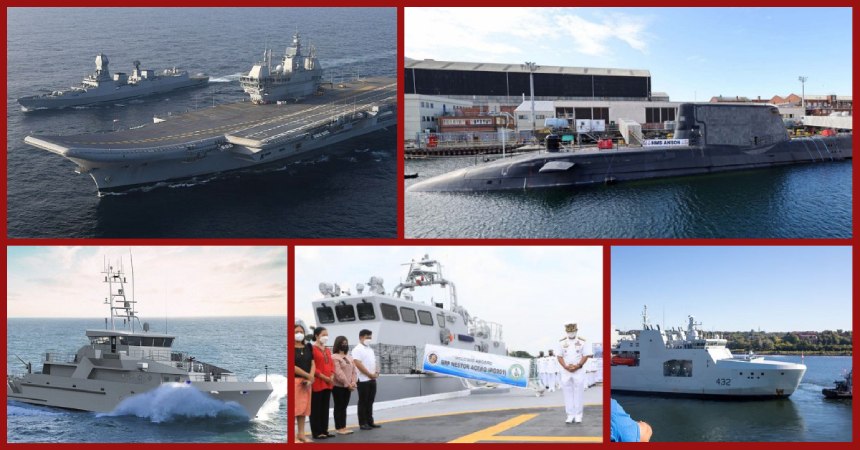 India commissions its first locally-built aircraft carrier as Britain welcomes its newest submarine into service. Deliveries include two patrol vessels for the Philippines and one for Canada. Lastly, the French government places an order for a new class of coastal enforcement boats for police use.

The Indian Navy commissioned the indigenously built aircraft carrier INS Vikrant into service in a ceremony on Friday, September 2.

The new carrier is the second Indian Navy ship to be named Vikrant. The first Vikrant was the country’s first aircraft carrier, which was completed in 1961.

HMS Anson was built by BAE Systems to be capable of missions ranging from task force protection to long-range strikes and intelligence gathering.

The submarine’s armament will include up to 38 Spearfish torpedoes and Tomahawk cruise missiles. Facilities are also available for launching and recovering small raiding and reconnaissance teams of Royal Marines.

The Philippine Navy FAICs are variants of the Shaldag Mark V patrol vessels being built by Israel Shipyards for the Israeli Navy and other customers.

A total of nine FAICs will be supplied to the Philippines beginning in the third quarter of this year for operation in littoral and EEZ waters. This number also includes four vessels that will be built at the Philippine Navy’s own shipyard facilities in Cavite City just outside Manila.

The future HMCS Max Bernays will also be the first ship in its class to operate primarily off the west coast of Canada.

The 103-metre vessel was designed in compliance to IACS Polar Class 5. A diesel-electric propulsion system consists of four 3.6MW diesel engines that supply electrical power to two 4.5MW motors to deliver speeds of 17 knots in open water and three knots for icebreaking.

The Direction Generale de l’Armement (DGA), the French government’s defence procurement agency, has placed an order for a new class of coastal patrol boats to be operated by the Maritime Gendarmerie police force.

Each vessel will have a length of 46 metres, a displacement of 350 tonnes, and armament consisting of 7.62mm and 12.7mm machine guns.

The patrol boats will be built by a consortium formed by local shipbuilders Socarenam and CNN MCO. The contract covers a maximum of six vessels with deliveries scheduled to commence in the second half of 2024.