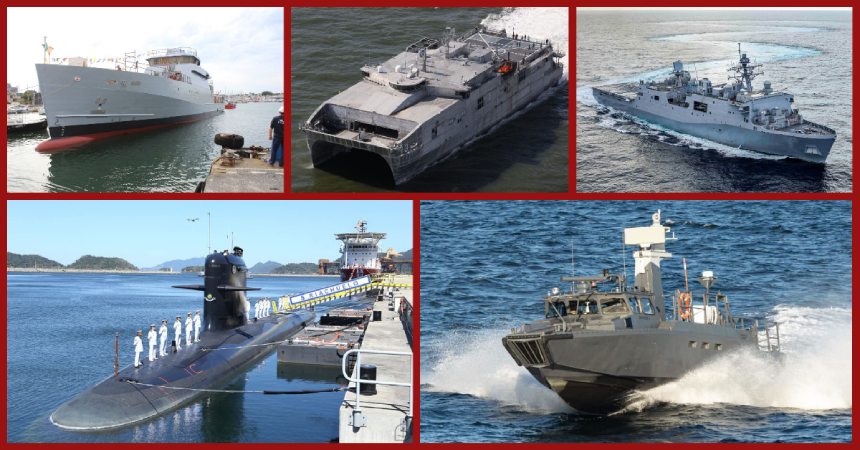 A new submarine enters service with the Brazilian Navy and Jamaica will soon begin operating a new boat for customs enforcement duties. Sweden is conducting trials of a naval boat converted for autonomous sailings while a French yard launches a patrol vessel for Senegal. For the US Navy, a new fast transport is nearing completion as construction starts on a large capacity amphibious ship.

The submarine is the first in a planned series of four that are slightly longer variants of the Scorpene-class originally designed by France’s the Naval Group. Construction took place at the facilities of Brazilian shipbuilder ICN.

Enforcer I measures 11 metres long and is powered by two Yamaha engines. The boat was also built to incorporate all-weather capability.

Like other vessels in the JCA patrol fleet, the new boat will be operated in support of the country’s coast guard and marine police during maritime border security missions.

The Swedish Royal Navy and Swedish defence technology company Saab have begun testing of a vessel that has been converted to incorporate autonomous functions.

Enforcer III was originally built by local shipyard Dockstavarvet as a CB90-class fast interceptor craft. The vessel is now being operated as a testbed for communication systems, sensors, cameras, and lasers for autonomous navigation.

The technology being tested on Enforcer III will see use in missions such as reconnaissance.

The tests were carried out in the southern Baltic Sea. A crew was present on board for security reasons though the boat’s operations were monitored remotely by controllers on the corvette HSwMS Nyköping.

Austal USA has completed acceptance trials of the future USNS Apalachicola, the thirteenth Spearhead-class expeditionary fast transport (EPF) ordered by the US Navy.

Apalachicola is the first Spearhead-class ship with capabilities for V-22 Osprey flight operations and enhanced medical support. Austal said it is also the US Navy’s largest ship with the capability to operate as an unmanned surface vessel (USV).

Testing of the vessel’s unmanned navigation capability was conducted by the US Navy and Austal with support from General Dynamics and L3Harris.

The ship is scheduled for delivery to the navy before the end of 2022.

Huntington Ingalls Industries’ (HII) Ingalls Shipbuilding has cut the first steel that will be used for the construction of the future US Navy amphibious transport dock (LPD) USS Pittsburgh.

The San Antonio-class LPD will be the fifth US Navy vessel to be named after the city of Pittsburgh, Pennsylvania.

Like its sisters, the future Pittsburgh will be capable of deploying with a US Marine Corps Air-Ground Task Force for amphibious and expeditionary crisis response operations that range from deterrence and joint-force enablement to humanitarian assistance and disaster relief.

French shipbuilder Piriou has floated out the second in a new class of three offshore patrol vessels (OPVs) ordered by the Senegalese Navy.

The future Niani will measure 62 metres long and will be capable of launching and deploying two rigid inflatable boats (RIBs).

Armament will include anti-ship and surface-to-air missiles.