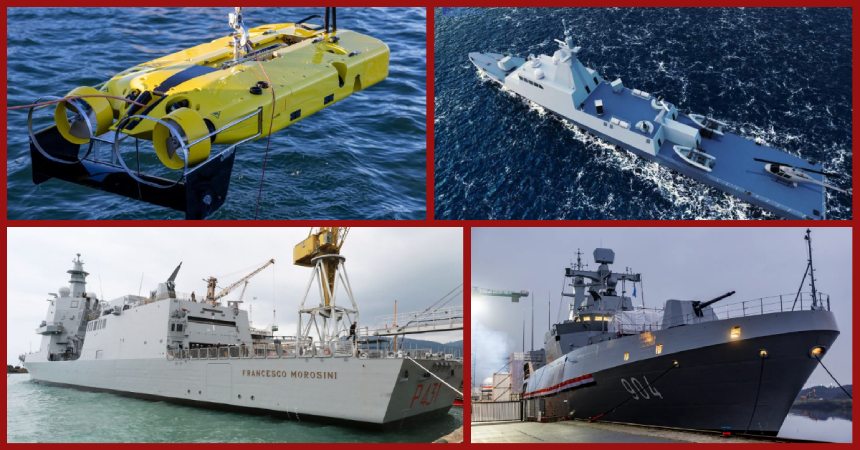 Recent ship deliveries include a frigate for Egypt and a patrol vessel for Italy. An Israeli builder introduces an improved corvette variant for the export market. Lastly, a Swedish unmanned craft manufacturer has been selected to supply minehunting systems for the Polish Navy.

German shipbuilder ThyssenKrupp Marine Systems (TKMS) has delivered the lead ship of a new class of frigates ordered by the Egyptian Navy.

The future ENS Al-Aziz and its three sisters are variants of the MEKO A-200 frigates that were originally developed by German defence firms for the export market.

Two other Al-Aziz-class frigates will be built in Germany while the fourth frigate will be constructed by Alexandria Shipyard in Egypt.

The future Francesco Morosini has an LOA of 143 metres, a crew complement of 135, and a combined diesel and gas (CODAG) that delivers a maximum speed of 32 knots. The vessel will be used for a range of missions including patrols, civil protection, and search and rescue (SAR).

Deck space is also available at the stern for an 11-metre-long rigid inflatable boat (RIB).

Israel Shipyards has unveiled the first images of a new stealth corvette design that will be based on the Reshef-class ships currently under construction for the Israeli Navy.

The vessels will each have a length of 80 metres, a displacement of 1,000 tonnes, space for 53 crewmembers and 20 additional personnel, and four diesel engines that will deliver speeds of up to 28 knots. Aft deck space will be available for a helicopter and two RIBs.

The new corvettes will be marketed exclusively to export customers.

A shipyard in Poland has placed an order for a series of remotely operated vehicles (ROVs) to be built by Swedish defence technology company Saab.

The semi-autonomous vehicles will be delivered between 2026 and 2027. These will be used for the safe disposal of sea mines.

The ROVs will be carried aboard the five Kormoran II-class mine countermeasures vessels that the same yard is building for the Polish Navy.