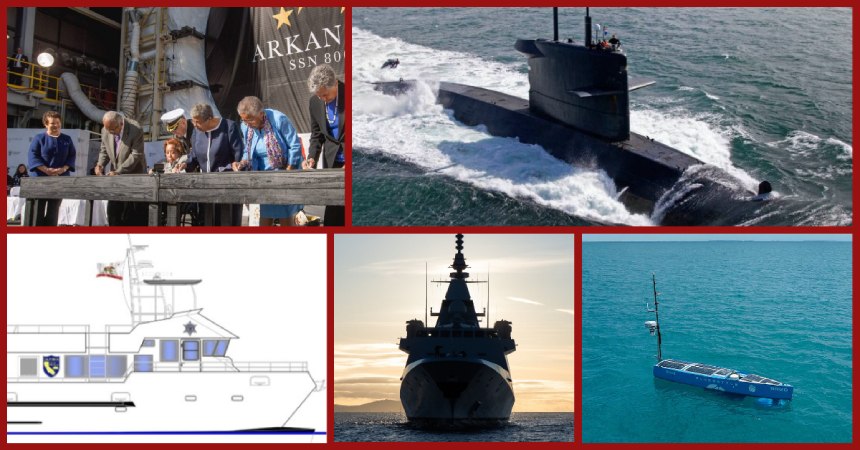 Newly acquired vessels include a French air defence frigate and an Australian-operated unmanned craft for surveillance work. Construction continues on a new US Navy attack submarine. Lastly, a California law enforcement agency places an order for a catamaran patrol vessel for both inland and coastal waters.

The new frigate was built primarily as an anti-air warfare (AAW) ship while still retaining some anti-submarine warfare (ASW) and anti-surface warfare (ASuW) capability. Its main air defence armament will consist of a battery of 32 MBDA Aster 15 or Aster 30 surface-to-air missiles housed in vertical launch cells.

The Bluebottle USVs were developed by Ocius Technology of New South Wales. The USVs can provide a 24/7 on-water surveillance capability, with the flexibility to be readily manoeuvred to respond to emerging surveillance requirements or tasks.

The craft may also perform other missions such as beach landing site reconnaissance.

Like its sisters, the future Arkansas will be capable of supporting multiple mission areas and can operate at speeds of more than 25 knots for months at a time.

The submarine is designed to carry out core missions including anti-submarine warfare, anti-surface warfare, delivery of special operations forces, strike warfare, irregular warfare, intelligence, surveillance, and reconnaissance, and mine warfare.

The California Department of Fish and Wildlife (CDFW) has awarded a Washington boatbuilder a contract for the construction of a hydrofoil-assisted catamaran vessel for patrols in California’s inland and coastal waters.

The 74-foot (22.5-metre) vessel will incorporate a stern launch and recovery ramp for use with a rigid inflatable boat (RIB). A high-resolution thermal camera will also be fitted.

Design work on the new CDFW patrol vessel will be provided by Teknicraft Design of New Zealand.

The Dutch Ministry of Defence has approached three candidate shipyards with a request for quotation (RFQ) for the development of four new submarines.

The candidate yards are France’s the Naval Group, Sweden’s Saab Kockums, and Germany’s ThyssenKrupp Marine Systems. The ministry expects the yards to submit their bids by the summer of 2023.

The ministry will then require several months to analyse the detailed bids before deciding on which yard will be awarded the contract to build the submarines on the basis of pre-established requirements and award criteria. One of the award criteria is the participation of Dutch businesses in the development, construction, and maintenance of important systems of the boat.

In addition, the ministry desires as much Dutch involvement as possible. The winning shipyard must therefore enter into an agreement with the Ministry of Economic Affairs and Climate Policy.