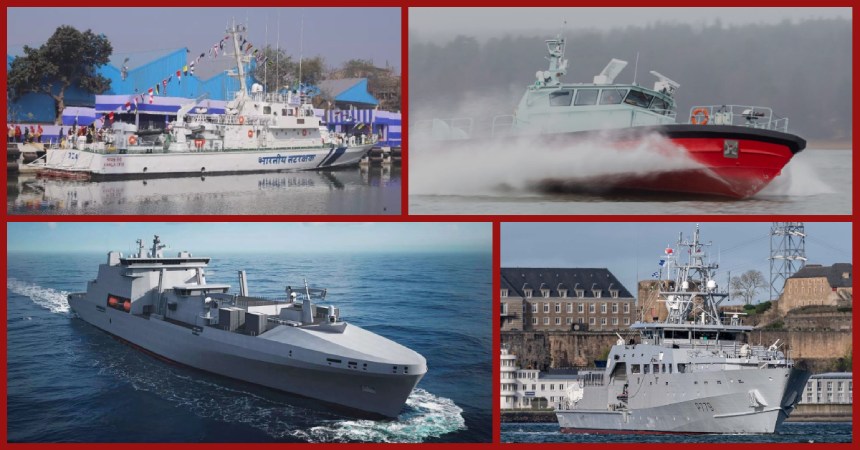 The French Navy has a new multi-role vessel for deployment from one of France’s overseas territories while the Indian Coast Guard places a fast patrol craft into service. The Royal Danish Navy will expand its patrol vessel fleet with the acquisition of newbuildings from a Finnish shipyard. Finally, the UK defence ministry awards a contract for the construction of three large ships that will provide logistical support for the Royal Navy’s aircraft carriers and other surface combatants.

The vessel also has accommodations for a 35-strong crew and armament consisting of a 40mm naval gun.

The FPV was commissioned into service shortly after its delivery.

Auguste Benebig will be operated out of New Caledonia. Its missions will include maritime patrol, pollution response, and search and rescue (SAR).

The POM-class will replace the older P400-class patrol boats as the navy’s main forward-deployed vessels in France’s overseas territories.

Finnish shipyard  Marine Alutech will deliver two patrol boats in a series to the Danish Ministry of Defence’s Acquisition and Logistics Organisation.

The boats will be used by the Royal Danish Navy for conducting joint operations with Frontex, the European Border and Coast Guard Agency.

The vessels will be designed to operate in climate conditions ranging from extreme cold to humid tropical conditions. Missions will include coastal surveillance, SAR, law enforcement, fisheries control, disaster response, and environmental protection.

A consortium formed by UK naval architecture firm BMT, Belfast-based shipyard Harland and Wolff, and Spanish defence contractor Navantia has been awarded a £1.6 billion (US$1.97 billion) contract by the UK Ministry of Defence for the manufacture of three Fleet Solid Support (FSS) ships for the Royal Navy.

Once in service, the three FSS ships will be operated by the Royal Fleet Auxiliary (RFA) and will keep the Royal Navy’s Queen Elizabeth-class aircraft carriers and amphibious task groups supplied with everything from ammunition to food as they sail on operations around the world.

The majority of the blocks and modules for the ships will be constructed at Harland and Wolff’s facilities in Belfast and Appledore. Build work will also take place at Navantia’s shipyard in Cadiz in Spain, with the final assembly for all three 216-metre-long vessels to be completed in Belfast.