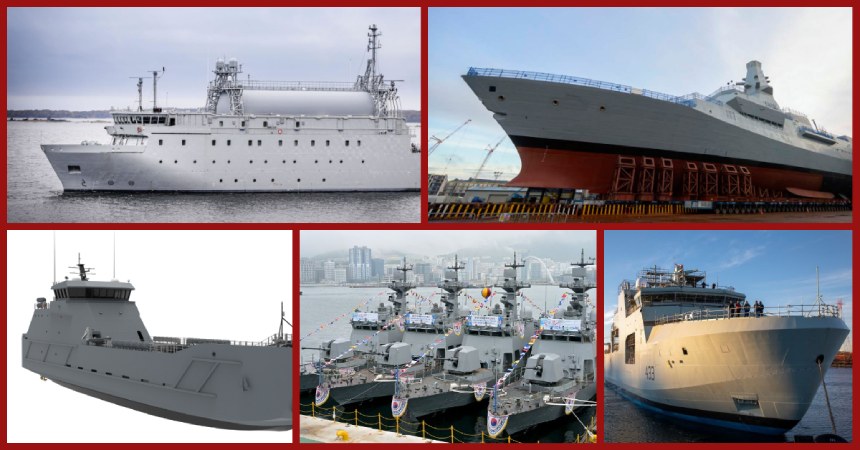 New navy ships have been launched in Canada and the UK as construction will soon begin on a landing ship for Bangladesh. Orders have meanwhile been placed for a patrol boat quartet for South Korea and a signals intelligence ship for Poland.

The 103-metre vessel was designed in compliance to IACS Polar Class 5. A diesel-electric propulsion system will consist of four 3.6MW diesel engines that supply electrical power to two 4.5MW motors to deliver speeds of 17 knots in open water and three knots for icebreaking.

The AOPS’ armament will consist of one 25-millimetre autocannon and two 12.7-millimetre machine guns.

The future William Hall will then undergo further outfitting at Irving’s Halifax facilities.

BAE Systems floated out the first Type 26 or City-class frigate to be built for the Royal Navy on Wednesday, November 30.

The future HMS Glasgow is then set to undergo further outfitting, testing, and commissioning. Its official entry into service is scheduled for the mid-2020s.

As with the other Type 26 frigates, the future Glasgow will specialise in anti-submarine warfare.

The vessels will belong to the Gumdoksuri class, which are upgraded variants of the South Korean Navy’s Yoon Youngha-class patrol boats.

The newer craft will be employed primarily as quick reaction platforms along the Northern Limit Line, the de facto maritime boundary between North and South Korea in the Yellow Sea.

The Polish government, through the Polish State Treasury Armament Agency, has awarded Swedish defence company Saab a €620 million (US$646 million) contract for the design and construction of two signals intelligence (SIGINT) ships for use by the Polish Navy.

The ships will be built at a yard in Gdansk while Saab will serve as the prime contractor and will also be responsible for the integration of advanced mission systems.

The first vessel is scheduled to be delivered in 2027.

Construction so start on new landing craft for Bangladesh Navy

Khulna Shipyard in Bangladesh will soon begin construction on a new tank landing craft (LCT) slated for the Bangladesh Navy.

The vessel will be operated primarily in the Bay of Bengal and will also be capable of secondary missions such as humanitarian assistance and disaster response.

Design work on the LCT will be provided by Canada-based Vard Marine.