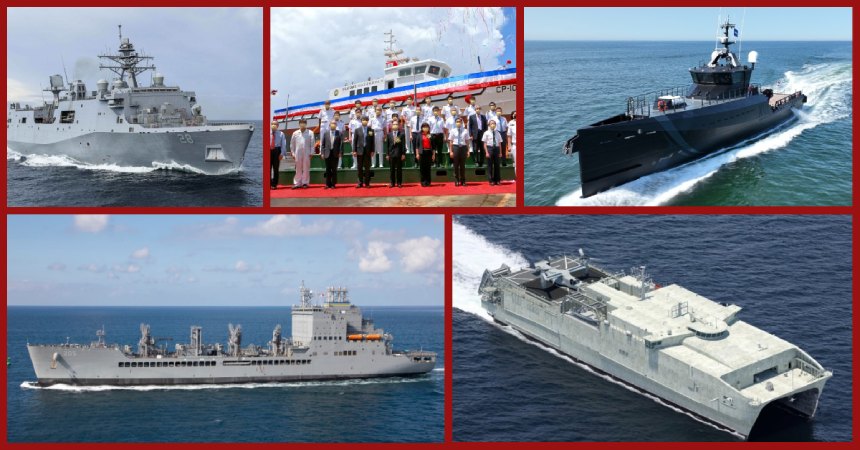 Vessel deliveries have been completed to the navies of the US and the UK as well as Taiwan’s main customs enforcement organisation. A construction schedule has been outlined for new warships for the Philippines. Lastly, a US Navy fast transport ship due to be delivered before the end of the year is undergoing autonomous navigation trials.

The US Navy commissioned its newest amphibious transport dock (LPD) in a ceremony on Saturday, July 30.

USS Fort Lauderdale is the 12th San Antonio-class LPD to be built for the US Navy. It was constructed by Huntington Ingalls Industries’ (HII) Ingalls Shipbuilding Division in Pascagoula, Mississippi.

The LPD is the first naval ship to honor the city of Fort Lauderdale, Florida.

Like its San Antonio-class sisters, Fort Lauderdale is designed to support embarking, transporting, and landing US Marines and their equipment by conventional landing craft (LCU) or air-cushioned landing craft (LCAC). The well deck can accommodate either one LCU or two LCACs, and the ship’s capabilities are further enhanced by its flight deck and hangar, enabling the ship to operate a variety of helicopters and the MV-22 Osprey tilt-rotor aircraft.

The US Navy recently took delivery of USNS John Lewis, the lead ship of a new class of fleet replenishment oilers (T-AOs).

The ship will be operated by Military Sealift Command to provide diesel fuel and lubricating oil and small quantities of fresh and frozen provisions, stores, and potable water to US Navy ships at sea, as well as jet fuel for aircraft.

Built by Taiwan International Shipbuilding, Haiying Ting (“Seahawk”) is the second in a planned series of four boats ordered by the customs administration. Delivery is scheduled for late October 2022.

Once completed, Haiying Ting will have an LOA of 32 metres, a beam of seven metres, and a displacement of 174.8 tonnes at full load. When sea conditions are below Beaufort Force three, the boat will be able to sail at a speed of 30 knots.

The Royal Navy’s NavyX technology unit has taken delivery of a modified fast crewboat from the Damen Shipyards Group of the Netherlands.

Named XV Patrick Blackett after a famed British naval officer and scientist, the 42-metre vessel will have a crew of five and will be used as a trials ship.

The vessel will be used as a platform for the assessment of a wide variety of equipment. Its 140 square metres of deck space will provide a large, unobstructed area for unmanned aerial vehicles (UAVs), autonomous underwater vehicles (AUVs), and other systems.

The extensive internal area that would normally have seating for up to 100 personnel is being converted into an operations centre and a meeting room. Four Caterpillar engines will give it a top speed of more than 20 knots.

The Philippine Department of National Defense (DND) recently confirmed that construction of the Philippine Navy’s newest corvettes will commence with the cutting of the ships’ first steel in the fourth quarter of 2022.

Two corvettes will be built by South Korea’s Hyundai Heavy Industries (HHI). The ships will be capable of anti-surface, anti-submarine, and anti-air warfare.

HHI had also supplied the Philippine Navy with two guided missile frigates. The DND said the selection of HHI for the corvettes’ construction will help ensure commonality and interoperability.

Known as Unmanned Logistics Prototype trials, each test event increases the perception capabilities and complexity of behaviours demonstrated by the autonomous systems. Test evolutions to date include point-to-point autonomous navigation, vessel handling, and transfer of vessel control between manned and unmanned modes.

Future test events will add levels of difficulty and include night navigation, and differing weather and sea states.

The future Apalachicola is scheduled for delivery to the navy later this year. The ship was built by Austal USA of Mobile, Alabama.