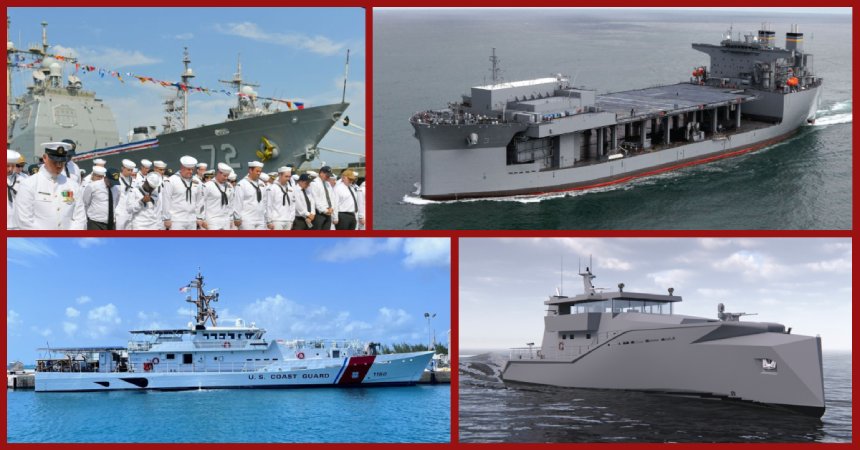 A new multi-role cutter has been delivered to the US Coast Guard as the US Navy and the Guyana military place orders for additional vessels. Meanwhile, a veteran US Navy cruiser caps off its nearly three-decades-long career.

The future USCGC William Chadwick has a length of 154 feet (46.9 metres), a flank speed of 28 knots, and stern launch and recovery ramp for a 26-foot (7.92-metre) over-the-horizon interceptor cutter boat. It will be the first of six FRCs to be homeported in Sector Boston.

The cutter honours William P. Chadwick, a lifeboat station keeper who was decorated for his actions in rescuing the crew of a troubled schooner off the coast of New Jersey on February 3, 1880.

The award comes in addition to US$600 million already received to procure long-lead time materials for the same ships.

The contract modification also provides an option for the Navy to procure an additional oiler bringing the total potential value to US$2.7 billion for the four ships. Construction of the four ships is scheduled to begin in the third quarter of 2023 and continue into 2027.

Once completed, the new vessel will join eight other Metal Shark interdiction and patrol vessels currently in service with the GDF.

The all-weather-capable vessel will carry a crew of 24 on extended missions at sea. It will be designed to accommodate a wide range of mission profiles including search and rescue, border patrol, police and customs duties, and counter-narcotics operations.

The US Navy decommissioned the Ticonderoga-class guided missile cruiser USS Vella Gulf in a ceremony in Norfolk, Virginia, on Thursday, August 4.

Commissioned in 1993, the ship deployed numerous times in support of Operation Enduring Freedom as well as anti-piracy operations off the Horn of Africa.

Vella Gulf is the first of five Ticonderoga-class cruisers scheduled for decommissioning in 2022.