The Royal Netherlands Navy (RNLN) has long been one of Europe’s foremost maritime forces, and remains a significant player in NATO, and multi-national, maritime security operations.

Like many other European navies, though, the RNLN has suffered badly from defence cuts in recent years, and while it still includes some modern and powerful combatants, it is a somewhat unbalanced force.

Just four modern front-line frigates, of the De Zeven Provincien class, remain in the RNLN order of battle, backed up by two older M-class frigates, which are suitable for limited roles such as maritime border patrols, anti-piracy operations and search and rescue.

Other important units include four effective, but ageing Walrus-class diesel electric attack submarines, and a quartet of modern and capable Holland-class OPVs.

The RNLN seems, though, for a force of modest size, somewhat short of escorts, but over-equipped with amphibious warfare vessels, while lacking in the dedicated replenishment at sea (RAS) capability essential for sustained offshore operations. 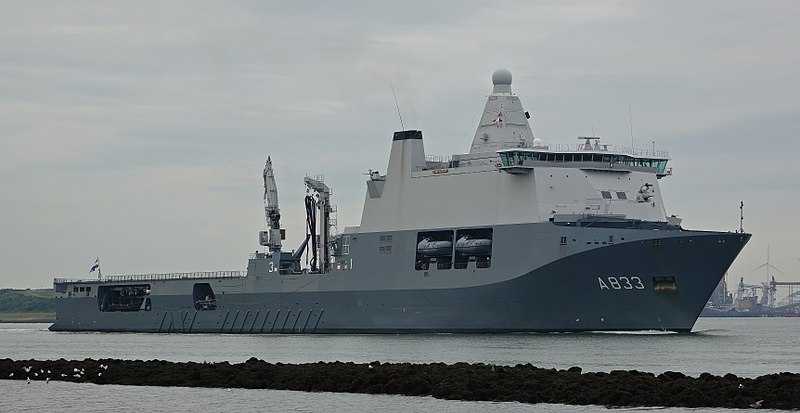 The 12,750-tonne Rotterdam, and the 16,500 tonne Johan de Witt are both modern landing platform docks, with strong aviation support capabilities. The newer, 27,800-tonne multi-role ship Karel Doorman, which narrowly escaped being sold off prior to commissioning in 2015 ,is primarily another amphibious warfare asset, but has some RAS capability.

Amphibious warfare, and RAS operations are, though, not easily compatible, and the ship obviously cannot be in two places at once. The RNLN lost its last dedicated RAS vessel in 2014, when the 1995 vintage tanker Amsterdam was, controversially, sold to the Peruvian Navy.

Now, though, a significant revival in the service’s RAS capabilities is on the horizon. It was confirmed in late 2018 that a new-build, 20,000-tonne support ship, due in service by 2023, will be named Den Helder, in honour of the Dutch city, which has many naval connections.

Based partly on the design of the Karel Doorman, the new ship will be constructed by Damen Shipyards, although it is not yet clear whether the Dutch company will build it at a domestic yard, or wholly, or partly, at one of its overseas subsidiaries. The hull of Karel Doorman was constructed at Damen’s Galati yard in Romania, with the ship being completed and commissioned in the Netherlands.

The ship will feature diesel-electric propulsion, and it will be equipped with RAS rigs port and starboard for the underway transfer of fuel, ammunition and dry stores.

Dutch naval auxiliaries are traditionally well equipped with sensors, armament and helicopters, to enable some participation in combat operations, and Den Helder will be no exception.

The ship’s armament fit will include a 30mm Marlin cannon, and a Goalkeeper seven-barrel close-in weapon system. Two NH-90 helicopters and two RHIBs, or fast interception craft, will be carried. Thales NS100 long range air and sea surveillance radar will be installed.