Last month, the Indian Navy conducted the largest ever disaster relief and rescue operation under its Southern Naval Command, part of an effort to rescue thousands of people affected by the devastating floods that ravaged the coastal state of Kerala.

Known as Operation Madad, the navy led a multi-agency effort that rescued close to 17,000 people over 16 days, and deservedly earned many accolades for its efforts.

A few days after the operation in Kerala ended, the Indian Navy ship, INS Sahyadri, sailed into Darwin, Australia. The ship and crew had arrived to participate in the multilateral exercise Kakadu, which involved maritime forces and observers from over 25 countries.

Media coverage of this event was relatively muted in India. However, the fact that Sahyadri has been deployed in the South China Sea and the Pacific Ocean for over four months, making many port calls and participating in other multilateral naval exercises, underscores the Indian Navy’s intent to make its presence felt across the Indo-Pacific.

The vastly differing character of these two missions highlights the expanse of the spectrum within which naval operations lie. In recent years however, the Indian Navy has been in the spotlight for its missions at the lower end of the spectrum, especially as the de facto lead agency for disaster relief operations in coastal India. It is also deeply entrenched in other operations in the littorals, such as in coastal security efforts.

While such missions may endear the navy to the local populace and the civilian and political establishment, they may not augur well for its “blue-water” aspirations. 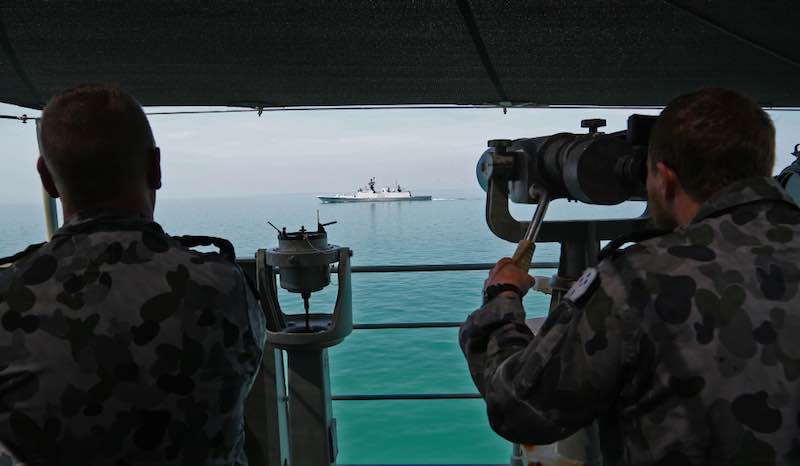 INS Sahyadri during 2014 exercises with the Royal Australian Navy. Photo: Department of Defence

The Indian Maritime Security Strategy document of 2015 clearly articulates what the Indian Navy sees as its role in enabling good order at sea in the Indian Ocean Region. In establishing primary and secondary areas of interest, the contours of which may have since altered, there is a clear case for a maritime force that is able to achieve effects far from the Indian shores.

The document also examines the navy’s role in littoral operations, working in close coordination with the coast guard, and other central and state agencies. While the strategy document does not suggest either mission to be more important, or to be undertaken at the expense of the other, multiple factors may be guiding them into becoming “either-or” propositions.

In July, a parliamentary report criticised as “abysmally low” the Indian government’s budgetary allocations to the armed forces. The perfunctory increase of about three per cent in the budget for the navy, the report noted, was not adequate to cover inflationary pressures, and therefore was effectively not an increment. With serious gaps in capacity at the higher end of naval operations, such as in aircraft carriers, submarines, helicopters and minesweepers, current budgetary trends indicate that in the foreseeable future, the navy is unlikely to be able to design a force that can deliver on its “blue water” doctrine.

Driven by a civilian bureaucracy

The complex and often controversial defence procurement process in India does not aid the navy’s cause either. With constrained indigenous options, especially in ship-borne weapon systems and aircraft, the navy is forced to seek imports, with prohibitive costs – both in terms of money and time. Driven by a civilian bureaucracy that remains somewhat indifferent to military-strategic imperatives, the acquisition cycle runs significantly slower than the electoral one, thereby removing naval force structure design from much-needed political direction and oversight.

There are also significant human resources costs incurred by the navy in littoral operations. Personnel trained in high-end warfighting functions, who should ideally be deployed on capital warships, submarines and ship-embarked air squadrons, are instead deployed for functions such as maritime law enforcement, coastal surveillance and search and rescue.

While these are critical functions in the larger national security canvas, agencies such as the coast guard and other arms of the civil administration are more suited to take on these tasks. Just because the navy can do it expediently, does not mean that it should take on responsibilities that detract from, and arguably dilute, its primary charter.

There has been a renewed debate on the need for the Indian Navy to invest in large and costly ships such as aircraft carriers. Much of this debate hinges on cost-effective alternatives, and on the question of their effectiveness and adequacy. It is for the Indian Navy and the government to arrive at a force-structure that equips the navy adequately for its mandate.

But in an environment where the most used and visible naval assets are patrol boats and utility helicopters, a democratically elected government will likely be hard-pressed to justify expenditure on naval assets with limited use for the public.

The Indian Navy is undoubtedly a vital player in the maritime security architecture of the Indo-Pacific. However, as it gets increasingly enmeshed in benign and constabulary functions, there is a real risk of diluting its ability to service the military and diplomatic end of its doctrine.

The navy may do well to divest itself of some of these roles that are better suited to other agencies, and focus bulk of its resources on fulfilling its “blue-water” goals. At a strategic level, this would enable stability in maritime Indo-Pacific, and further India’s aspirations to be regional player of consequence.

Prakash Gopal is a PhD candidate at the Australian National Centre for Ocean Resources and Security (ANCORS), University of Wollongong, Australia. A former Indian naval officer and researcher at the National Maritime Foundation, India, he has written on India’s maritime security imperatives, international maritime cooperation and on legal issues impacting maritime security.