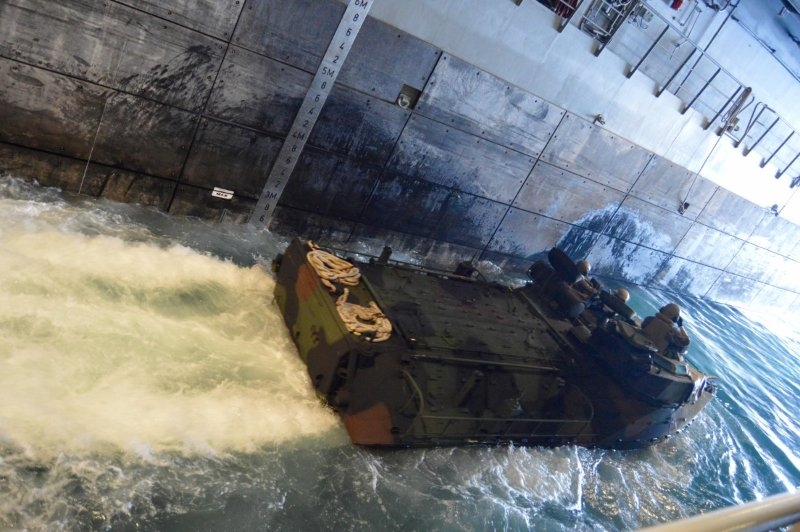 The age of battleships laying broadsides into beaches may have been over when the USS Iowa was decommissioned, but the increasing threat of anti-ship missiles and A2/AD may draw a curtain on the modern surface combatant doing likewise.

For a contested ship-to-shore movement to be successful at the shore overmatch is required at the landing zone both in terms of quantity of troops and firepower. Unable to conjure enough firepower out on the beach due to obvious constraints, extensive supporting firepower must come from the air and the sea.

Contesting the beach in the modern age

Anti-ship and surface-to-air missiles are a constant and pervasive complication to ship-to-shore movement against a well-equipped foe. Prior to the creation of precision weapons amphibious fleets could often stage just over the horizon or even closer. Now amphibious fleets can be challenged from land more than 100 miles out to sea.

A2/AD strategies can situate long-range artillery and rocket batteries within air defence bubbles, forming extensive threat zones while using unmanned vehicles for ISR. The proliferation of ASMs and SAMs means even some non-state actors can hold amphibious fleets at risk further out to sea. For example, Hezbollah possesses Noor anti-ship missiles with a range of 75 miles, and for state actors the range is even greater.

Modern missile systems present a major problem to ship-to-shore movement in that they can also force out of range what little exists of gun-based fire support from ships. Given how anti-ship missiles may be fielded in fewer numbers than anti-air missiles, ships may find themselves providing fire support when aircraft cannot. Even so, the land attack cruise missiles they may contribute could also be held at risk by anti-air systems, and where closing the range to use guns more effectively could put ships at risk from smaller, anti-armour guided weapons.

In any case accurate fire support is vital and in high demand. Naval gunfire support played a considerable role in Vietnam and particularly in the Falklands, enabling small British units to combat larger Argentine forces. However, the transition from gunfire to missiles as the default weapon of modern ships decreases the availability of fire support.

Navies are unlikely to fire expensive munitions such as a Tomahawk missile to destroy a machine gun emplacement or a vehicle, whereas gunfire can be brought to bear on numerous targets of opportunity. Ships also carry limited numbers of land attack missiles due to the need to maintain a diverse inventory of missiles for a variety of multi-domain threats.

In a contested theatre one would also be loath to expend many Tomahawks on minor land targets a short distance away. Land attack missiles may be able to carry some of the burden for amphibious troops, but if fired at a great distance out to sea the long flight time for subsonic missiles is hardly ideal for troops in contact. These cruise missiles would also likely need some form of in-flight retargeting support to ensure their precision.

The sea denial aspect of certain precision weapons can be mitigated to an extent by extending the range of gun-based fire support. These capabilities can include the Advanced Gun System firing the Long-Range Land-Attack Projectile (LRLAP) which can reach out to over 70 nautical miles. However, the cost of the LRLAP makes this exception prohibitively expensive. One LRAP at approximately $800,000 is around half the cost of a Tomahawk missile. One could purchase 11 guided Excalibur shells for that price able to hit targets over 30 miles away or 266 precision guidance kits for M549 shells and reach out to over 15 miles away. 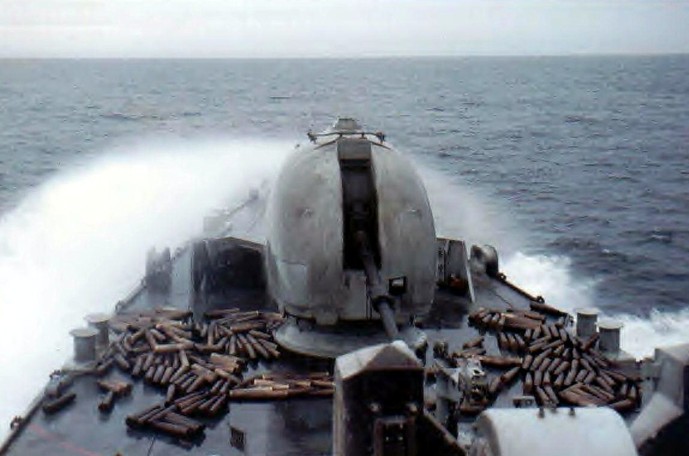 Spent shell casings from a naval gunfire support mission by HMS Cardiff (D108) on the night of June 5, 1982, as part of the Falklands War. Photograph was taken the morning after on June 6, also the top of her charred Sea Dart launcher can be seen bottom right. She fired 277 rounds that night and also shot down AAC 656 Squadron Gazelle XX377 in “Blue on Blue” friendly fire incident killing four British servicemen. Photo: Wikimedia Commons

Airpower to an extent has filled the vacuum gunfire or cruise missiles cannot. In the Falklands campaign for example, airstrikes from Harrier jets helped make up for the lack of gunfire support.

However, air defence systems have become increasingly sophisticated and potent. As they will continue to grow in capability and proliferate amongst state and non-state actors, aircraft operating in A2/AD environments will be restricted to more advanced platforms.

Rotary wing aircraft could be of little value if their ships have been forced out to sea by anti-ship missiles since the combat radius of many rotary wing attack aircraft is around 120 nautical miles. Instead, viable firepower support will be best provided via tube artillery, rockets, or cheaper missile systems that can operate closer to shore.

While surface combatants can undertake the task of providing fire support the range of most current gun systems places them well within the range of ASMs as well as tube and rocket artillery. It is unlikely one would take an Arleigh Burke or Type 45 destroyer into such an environment.

Instead, cheaper and more expendable gun or missile boats carrying missiles like the Spike NLOS or ALAS, rocket artillery systems, or advanced naval guns will need to provide the firepower required. GMLRS equipped boats, capable of firing the ground-launched Small Diameter Bomb, the Deep Strike Missile, the Alternative Warhead, and other munitions could provide a powerful mix of close-in fire support and deeper interdiction fires. However, the key vulnerability of missile or rocket artillery boats will be logistical sustainment. These indirect fire systems could be used from the flight decks of larger ships as an intermediate measure.

Such craft will also require point defence systems for survivability. This is a necessity to provide survivability for ship-to-shore connector because one can expect increasingly precise artillery and rocket systems. Laser-guided munitions capable of striking moving targets and top attack munitions such as the BAE Bofors 155 BONUS or SMArt 155 will be capable of significant devastation. It is conceivable that counter-battery fire can be swapped between defending land-based artillery and ships providing fire support for an invading force as artillery grows more precise.

Once visible on the horizon direct fire systems like anti-tank guided missiles can target landing craft and their fire support assets. Thus, hard and soft counter rocket, artillery, and mortar (C-RAM) systems, air defence, and active protection systems like Trophy will need to be equipped by both connectors and the vessels providing their fire support. Transit times to the shore will place both under fire for considerable lengths of time and sustaining close fire support for an amphibious force will be highly risky.

In an A2/AD environment ship-based fire support may often be limited to the unattractive option of cruise missiles given current capabilities and threats. Cheaper long-range missile and artillery systems will need to become more available in order to provide the requisite fire support to develop overmatch.

One potential solution is the utilisation of cheaper gun and missile boats that can be risked close in to shore to provide fire support and to project an area of point-based air defence around the approaching landing craft to increase survivability.

In any case amphibious flotillas will require plenty of firepower and protection so as not to be disabled before arriving on the beach, but providing fire support against modern threats involves complicated and frequently unfavourable tradeoffs.

Part One of this series focused on the role of quantity in contested ship-to-shore movement. Read it here.

Josh Abbey is a research intern at the Royal United Services Institute of Victoria. He is studying a Bachelor of Arts at the University of Melbourne, majoring in history and philosophy. He is interested in military history and strategy, international security and analysing future trends in strategy, capabilities and conflict.