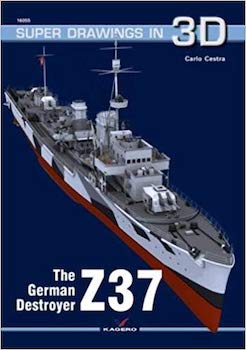 There is a lot to be learnt from the books of this series. While originally intended for naval nerds and ship modellers, the very detailed drawings, some in 3D, provide a wealth of information about the vessels reviewed. The accompanying historical notes are very revealing as to the success or failure of the vessel concept.

The German Kriegsmarine of World War II possessed some impressive looking surface ships but, apart from a handful of notable exceptions, relied largely on its U-Boot arm to effectively damage the Allies.

The 38-knot Z 37, or Narvik-class, destroyers were no exception to this generality. They were impressive looking, heavily armed – perhaps too heavily – craft that were let down by poor seaworthiness, unreliable engines and poorly trained and over-worked crew. While very promising in theory, in practice they failed to deliver. When you read this review, the reasons for that become obvious.