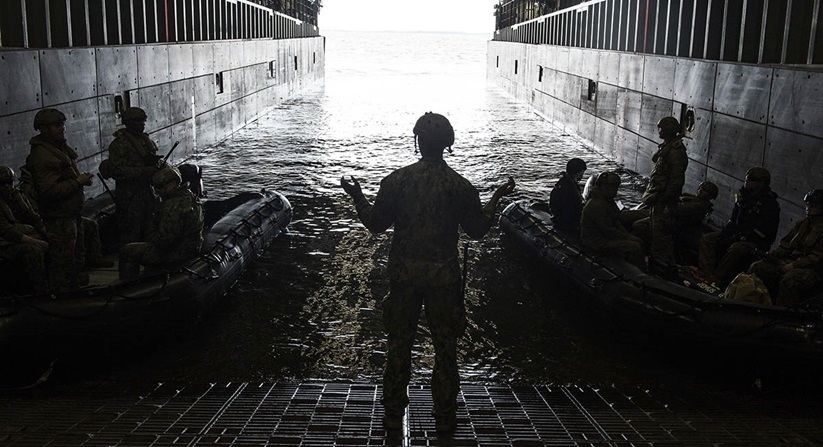 The test off the coast of the US state of Virginia was intended to see whether a task force without a minehunter assigned to it could hunt mines by sending out a mobile team with all their kit, and to see whether it could be done on a British ship.

Around 120 US Navy sailors, civilians, and contractors formed the “mine countermeasures mission module” assigned to Mounts Bay, which has spent the winter hunting drug runners in the Caribbean.

The US Navy MH-60 Seahawk helicopters deployed aboard Mounts Bay are equipped with a new laser system to detect mines below the surface of the ocean as well as a new piece of kit which can neutralise them from the air.

Also embarked aboard were raiding boats carrying torpedo-shaped devices which can be sent out to scan the seabed. If the devices found anything, divers would go into the water to inspect the objects.

Lastly, an unmanned surface vehicle (USV) was loaded aboard for long-range missions to search for mines and submarines.

The ten-day exercise was eight months in the planning. The organisers say it confirmed that “mobile minehunting” is feasible and that ships like the Bay-class are well suited for such missions.