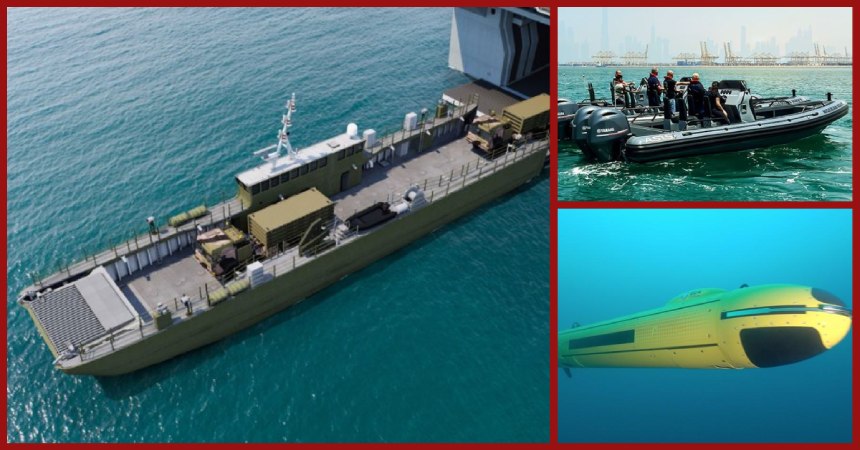 New naval vessels have been delivered to the US and Nigeria while two Australian firms will cooperate on the design of a modernised landing craft for army use. Lastly, Latvia will receive a significantly upgraded minehunting capability thanks to the acquisition of French-developed unmanned naval vehicles.

The boats can be carried aboard and deployed from the navy’s larger ships. Missions will include anti-terrorism, search and rescue, vessel boarding search and seizure, and maritime interdiction operations.

The aluminium-hulled RIBs each have a length of 7.6 metres, seating for up to eight passengers, and two Yamaha outboards that deliver speeds of up to 46 knots.

The US Navy formally named its newest autonomous surface vessel in a ceremony on Tuesday, August 23.

Built by Gulf Craft of Louisiana, the 200-foot (60.9-metre) Mariner utilises a crewboat hull but has modifications to suit navy requirements. It is also the navy’s first newbuild autonomous crewboat, as its two earlier sisters were originally operated by civilian companies in the Gulf of Mexico.

Mariner will be homeported in San Diego, California, alongside the navy’s other uncrewed surface vessels.

The Australian Maritime Alliance (AMA) has entered into a partnership agreement with Fremantle-based IMC Naval Architects to develop a new amphibious craft for the Australian Army.

The AMA, a joint venture between Serco and Civmec, and IMC are offering an evolved Littoral Manoeuvre Vessel – Medium (LMV-M) design. It will have a through-deck configuration, allowing for more flexible loading/offloading options and rapid ramp-to-ramp marriages with amphibious and sealift ships.

The partners said the design will also offer improved seakeeping and load-carrying capabilities. The three-deck design will allow the crew accommodation and engineering spaces to benefit from large dedicated full-beam compartments in addition to guaranteeing over 200 square metres of useable vehicle deck to facilitate mixed load configurations.

The new landing craft will be the partners’ bid vessel for a program seeks to replace the Australian Army’s aging fleet of LCM-8 class landing craft.

Latvian minehunters to be fitted with upgraded unmanned systems

French defence technology company the ECA Group will soon equip each of the Latvian Naval Forces’ five Tripartite-class mine countermeasures (MCM) vessels with its proprietary mine identification and disposal system (MIDS).

The MIDS suite on each ship will include a sonar-equipped autonomous underwater vehicle (AUV), a remotely operated vehicle (ROV) for mine identification, and an expendable ROV armed with an explosive charge for mine disposal.

ECA said the Latvian Naval Forces is the first naval operator to acquire this comprehensive drone solution for MCM missions.

Click here for more news stories, feature articles, and vessel reviews as part of this month’s focus on unmanned craft.