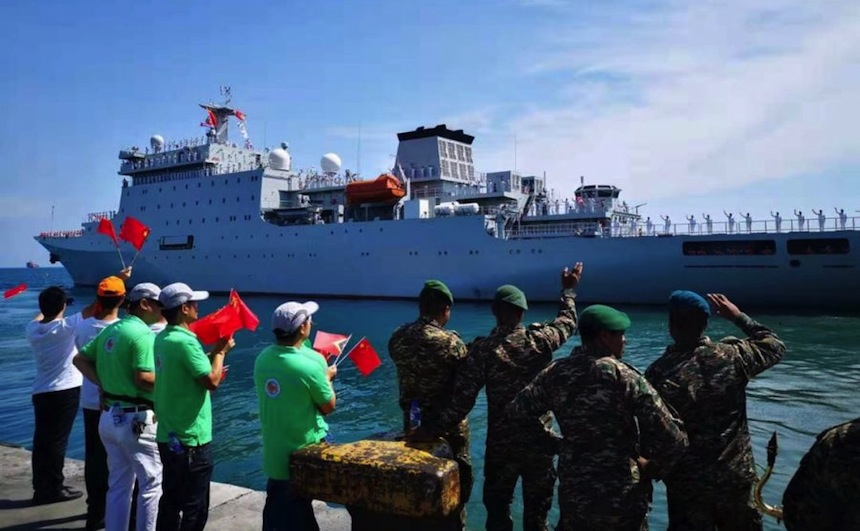 While relations with Timor-Leste remain strained over Australia’s 2004 bugging of its cabinet office, the young nation, on half an island just 720 kilometres from Darwin, has asked China to help train its navy.

The request was made by Timor-Leste’s defence and security minister, Filomeno Paixao, at talks this month with Rear Admiral Yu Wenbing of the People’s Liberation Army Navy. The talks took place during the visit to Dili of a Chinese warship and are an unsettling reminder to Canberra of Beijing’s growing military influence very close to home.

The request for China to train Timorese naval officers was confirmed by a local defence source.

The officers and crew of the 5,548-tonne Qi Jiguang, a Type 679 training ship, received a gala welcome as the vessel was escorted into Dili Harbour by the Timorese patrol boat Kay Rala Xanana. The Shanghai-class patrol boat is one of two purchased from China by Timor-Leste in 2008 to protect its ocean fisheries.

The warship visit came at a sensitive time. In August, Scott Morrison made the first visit to Timor-Leste by an Australian prime minister in 12 years as part of celebrations marking the 20th anniversary of the nation’s vote for independence from Indonesia. The Shanghai-class boats were on show and moored directly in front of the presidential palace during the commemorations.

Morrison announced that Australia would provide a package of maritime support measures for an upgrade of the country’s small naval port at Hera, east of Dili. Hera will be the home port for two new Guardian-class patrol boats gifted to Timor-Leste under Canberra’s Pacific Maritime Security Program, with delivery expected in 2023.

Timor-Leste is one of 13 countries to receive the patrol boats, to be built at the Austal yard in Western Australia. The program is part of a $300-million maritime security initiative to leverage “soft power” in the Asia-Pacific region as it is increasingly targeted by Chinese influence and investment.

The prime minister’s visit to Dili was intended to signal a new chapter in Australia’s relations with Timor-Leste, which had been weakened by the bugging scandal and the tortuous efforts to finalise a new maritime boundary between the two countries. Both the bugging and the handling of the boundary negotiations triggered concerns about Australia’s reliability as a close partner.

Dili regards strengthening bilateral cooperation and economic and defence ties with Beijing as a useful hedge against what some in the government consider undue influence and pressure from the West, including from Australia.

The news for Australia wasn’t all bad. Brigadier General Falur Rate Laek, deputy head of the Timor-Leste Defence Force (known by its Portuguese acronym F-FDTL), said the two Guardian-class patrol boats would be a welcome addition to the nation’s small navy and would improve security off its southern coast. He said tensions with Australia had not affected defence cooperation between the two countries, which remained “excellent”.

“We’re creating a special operations force. It will be an independent company,” said Falur on the sidelines of the celebrations commemorating the 1999 vote for independence.

A distinguished former senior Falintil guerrilla commander, Falur said the new Timorese unit would draw on the tactics used by Sparrow Force, which specialised in reconnaissance behind the lines, ambushes and hit-and-run attacks. Other former Falintil commanders have said that Sparrow Force’s operations provided a model during their decades-long guerrilla war against the Indonesian military following Jakarta’s brutal 1975 invasion. Falur comes from Ossu, a small town in eastern Viqueque, which once served as the Sparrow Force’s headquarters.

The F-FDTL has 2,129 personnel, including 200 women. It comprises two light infantry battalions, a naval arm, headquarters and support elements. Its UN-supervised birth in February 2001 was controversial and sowed the seeds of discord that would bring the country to the brink of civil war in 2006.

I attended an emotional ceremony in the mountain town of Aileu during which 650 former Falintil guerrillas, mostly loyal to former commander-in-chief Xanana Gusmao, were formally inducted into the ranks of the F-FDTL’s first battalion. Unfortunately, the ceremony also revealed the legacy of old historical differences and allegiances within Falintil. Another 1,300 veterans who expected to enlist were excluded.

Realising that Gusmao loyalists had formed the core of the new defence force, many of the rejected veterans would later seek enlistment in the country’s nascent police service, a force under the control of interior minister and Gusmao rival Rogerio Lobato, setting the scene for a possible future showdown.

In a briefing at the F-FDTL’s new Chinese-built headquarters in Dili, Falur stressed the importance of ongoing military cooperation with Australia and the former colonial power, Portugal, which are currently the country’s two biggest defence cooperation partners.

F-FDTL personnel recently participated in the massive Australian military exercise Talisman Sabre, and they were heavily engaged in training with the Portuguese military, he said. Several Portuguese officers work in the Dili headquarters.

A small number of defence personnel were receiving flight training in the Philippines ahead of a possible purchase of three medium-lift helicopters subject to parliamentary approval. They may be a Chinese-built variant of the Russian Mi-17 workhorse.

Falur also said he was keen for joint training of Timorese troops with the Australian Army’s Norforce unit, which specialises in long-range surveillance and reconnaissance and comprises a large number of Indigenous servicemen and servicewomen.

Mark Dodd was based in East Timor as a foreign correspondent from 1999 to 2001 and has continued to follow events there closely.