BOOK REVIEW | Unlike Anything That Ever Floated: The Monitor and Virginia and the Battle of Hampton Roads, March 8-9, 1862 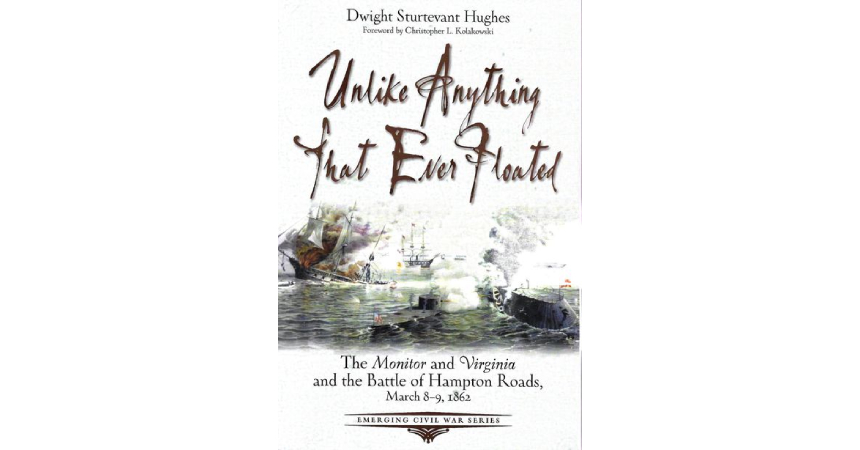 A finely wrought and conveniently brief account of one of history’s most important naval battles, this excellent little book describes the subject perfectly. The battle between the Confederate States Navy’s CSS Virginia and the United States Navy’s USS Monitor, near the mouth of the Chesapeake estuary, was the world’s first real engagement between “ironclad” warships.

By design, construction, armament, slow speed and size, although both were really only suited to sheltered waters, they were quite different ships. Built on the foundations of the former steam frigate USS Merrimac, the wooden-hulled but iron-armoured Virginia was significantly larger and, theoretically, much more heavily armed than the all-iron screw steamship Monitor. There were many other differences, especially including time to build, with Monitor taking only a remarkable, by today’s standards, 100 days from keel laying to launching.

Monitor was in many ways a “breakthrough” ship and, as is now generally well known, she decisively won the engagement and, thus, effectively broke the back of the “ironclad” part of the Confederate States Navy. She conclusively proved the effectiveness of a fully rotating turret over fixed guns such that rotating turrets are still very much in use today, 160 years on. Monitor introduced numerous other naval architectural and ship building innovations and was even centrally heated and fitted with flushing toilets. It was almost as though she had been conceived by Jules Verne.

However, she was definitely not a sea-going vessel. In fact, she capsized and sank in the open Atlantic off Cape Hatteras en route to her next action.

The author has done an impressive amount of research about the vessels and people involved at Hampton Roads. He even includes a very interesting travel guide to the museums and scenic points around the battle site.