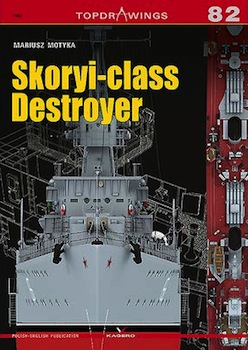 The construction of this series of 70 World War II-style ships commenced in 1948 in four Soviet shipyards with the first commissioned in February 1950. Nothing like a command economy to ensure swift building of warships!

Powered by steam turbines, they incorporated modern, for their time, electronics and substantial anti-aircraft armament in addition to five torpedo tubes and, among others, four 130mm guns.

Their brief description is not up to the usual standard of this series of reviews by Poland’s excellent and usually very thorough Kagero Publishing. For example, no displacement, length, speed or range details are given.

Their service life was not long. The last left the Soviet Navy in 1965 although some were given to Poland, Indonesia and Egypt where, doubtless, they rusted away. It is a pity there is so little detail provided because they looked like interesting and practical ships.

While short on technical detail, the review benefits from the usual brilliant Kagero drawings, which are highly detailed.