BOOK REVIEW | Northern Tars in Southern Waters – The Russian Fleet in the Mediterranean, 1806-1810 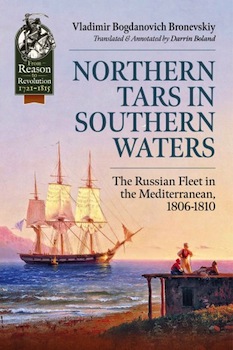 Translated and annotated by Darrin Boland, this thick (700 pages) book would at first sight seem very dreary. Russia was, historically, very much a “bit player” in Napoleon’s naval wars.

It most definitely is not dreary. Written by a Russian naval officer who, at the time described, was a twenty-something midshipman. He had a short but very interesting life. This period which covers the Baltic, North, Mediterranean, Adriatic and Aegean seas as well as the Atlantic Ocean, saw plenty of action, politics and experience.

Yet another intellectual sailor, and that term is not an oxymoron, the author looked at his world remarkably perceptively. For a young man, he had an unusually clear appreciation of the benefits to the wider world of the English Enlightenment. There are other examples of his perception dotted throughout.

His view of day-to-day life at sea shows a navy that was similar to but still different from the much better known British one. His descriptions of the various battles he participated in amid the chaos of Napoleonic Europe are fascinating.