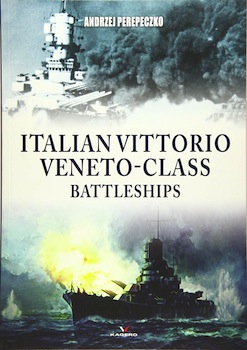 The uniquely wonderful Polish publisher of books of naval, particularly ship, history is making giant strides. This book is bigger and better than anything this reviewer has previously seen from the remarkable Kagero Publishing.

In exquisite detail, it describes Fascist Italy’s very impressive battleships that were afloat and ready in 1939 at the commencement of World War II. The author also had a most interesting personal history. With a degree in ship building engineering, he went to sea as a chief engineer in merchant ships. Along the way, he gained a doctorate with a thesis on the history of naval warfare. He eventually became a professor at the Polish Maritime Academy. He even found time to annoy the Soviets sufficiently for him to be exiled to labour in a coal mine.

His book shows a fastidious mind. It is brilliantly researched, illustrated and drawn. It is a very valuable contribution to the history of naval warfare.

Or, from CasematePublishers, Oxford, UK.