BOOK REVIEW | Devotion to Duty – A Biography of Admiral Clifton A. F. Sprague 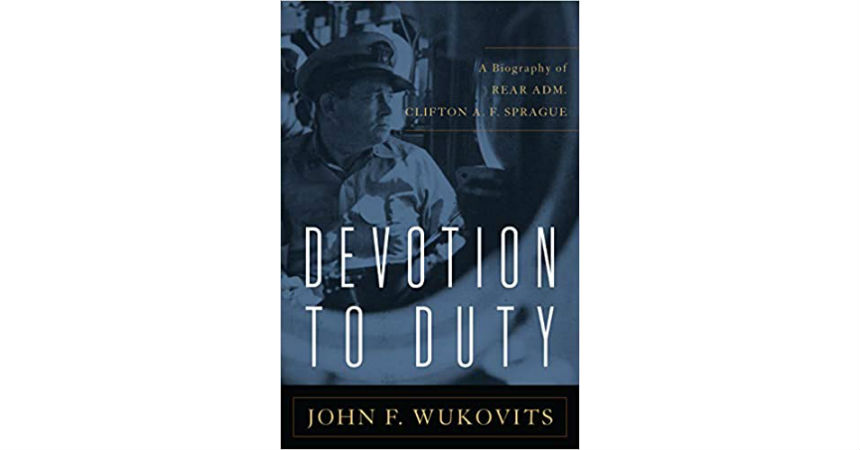 In a sea of massive egos of the Douglas MacArthur and William “Bull” Halsey type, Clifton “Ziggy” Sprague stood out as someone who shied away from personal publicity. Perhaps that is why he is less well known than many of his noisier contemporaries despite his notable and enormous naval achievements.

This fine biography describes well the entirety of his lengthy career from childhood to his, too early, death. While not especially long, Sprague’s was a good life very well lived.

While he was a notably effective naval officer throughout his career, it was his astounding and vitally important success in the Battle of Leyte Gulf in the eastern Philippines in late October 1944 that brought him to history’s attention.

Despite effectively being abandoned by his “superior”, Halsey, who sailed off on an ego tripping wild goose chase in his heavily escorted fleet of “Fleet” carriers, Sprague managed to save most of his small fleet of inadequately supported “Escort” aircraft carriers from a vastly superior Japanese force. In doing so he severely damaged the attacking Japanese fleet.

Fortunately, this fine author “found” Sprague before history forgot him. He was an important admiral whose natural reticence prevented him from being given the fame he richly deserved in his lifetime. This biography, first published in 1995 and re-issued as a paperback in 2020 very effectively corrects that.