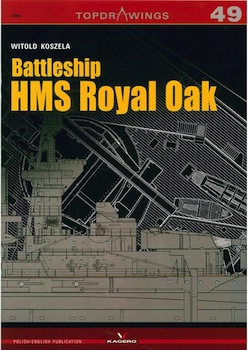 Yet another in the series of detailed design reviews and brief histories of twentieth century warships published by the Polish group Kagero Publishing. This one, as always, has been meticulously researched and brilliantly drawn.

The story of the Royal Oak is well known. Already largely obsolete, having been built during World War I, she was sunk inside Scapa Flow early in World War II by the German U-Boot U-47 commanded very skilfully and courageously by Gunter Prien.

These very detailed drawings comprehensively illustrate almost every imaginable aspect of that once great ship.