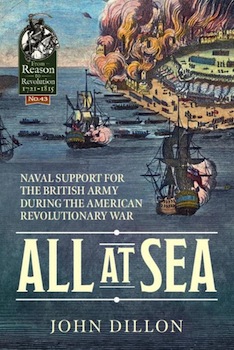 In early 1775, when the American Revolutionary War commenced, the Royal Navy was suffering severely from cut backs following the Seven Years War with the French and their allies. The American Revolution was neither wanted nor expected. The British had to work fast to support their far-flung troops in North America.

This carefully and very well researched account gives a good overview of how the Royal Navy responded to the massive logistical task presented to it by the Revolution. It also explains the effect of the later entry of the French into the quagmire.

While most of the British admirals lacked aggression, this is partly explained by the nature of that war in which they were, to a large degree, fighting against their own. Dillon covers that aspect very well.

This is a very thoughtful and useful history of a very important aspect of the American Revolution that has not been well covered elsewhere.