The Bangladesh Navy has taken delivery of two new survey boats in a series from local builder Khulna Shipyard.

BNS JB-01 and BNS JB-02 each have an LOA of 14.7 metres, a beam of 5.1 metres, a draught of 1.1 metres, and a displacement of 22.5 tonnes at full load. Design work on the all-aluminium vessels was carried out in compliance to Bureau Veritas class rules and provided by Western Australia-based naval architects Global Marine Design and Marine Consultancy Singapore.

As the smallest survey vessels in the Bangladesh Navy, the Khulna-built boats can easily operate in the country’s shallower and narrower coastal and inland waters. Also, the warped monohull design provides enhanced manoeuvrability as well as excellent seakeeping in rough waters to allow for survey work to be effectively carried out even in the open ocean.

Each of the two Khulna-built survey boats is powered by a pair of Cummins QSB-6.7 medium-speed diesel engines that each produce 224 kW at 2,600 rpm and are connected to ZF W320 reverse-reduction gearboxes. This configuration delivers a maximum speed of 16 knots and a range of 300 nautical miles at a cruising speed of 12 knots. Surveys will be performed at an even more economical speed of five knots to enable the boats to cover broad areas in rivers and lakes and along coastlines. Palmarine electro-hydraulic steering systems have been fitted as well.

The survey capability on each boat is enhanced by the installation of an A-frame on the spacious aft working deck. The assembly comes with an electric winch and is capable of lifting and deploying seabed-mapping sensors to add to the coverage provided by the boats’ own single-beam and multi-beam echosounders that have been built into their hulls.

In addition to the echosounders, the vessels’ comprehensive electronics include a JRC JMA-5212 X-band radar, ICOM fixed and handheld VHF radios, a Koden CVS-126 depth sounder, a Furuno GP-170 GPS, a command intercom system, and a sound velocity profiler. Power for the onboard systems is drawn from two Beta Marine diesel generator sets that each have a rated output of 22.7 kWe. Each boat also comes equipped with eight batteries for augmenting their respective electrical power generation capacities.

Four crewmembers and four survey technicians can be accommodated on each boat. Onboard accommodation spaces include a galley, a toilet, and a cabin with berths below main deck. An interior work area comes with tables for charts and survey equipment.

Wrap-around tube fendering has been fitted on the hull while Jotun paint was used for the exterior surfaces. 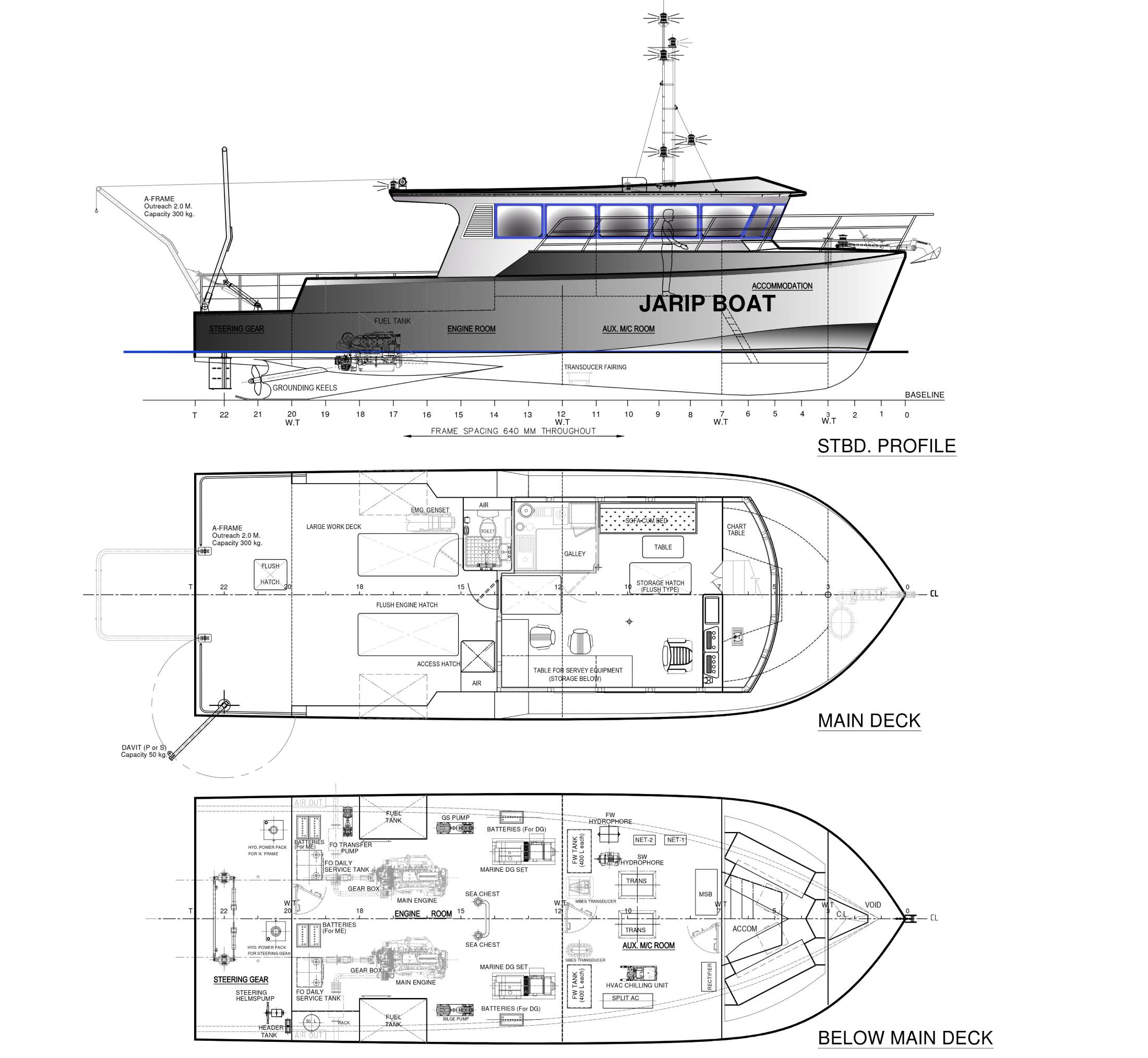