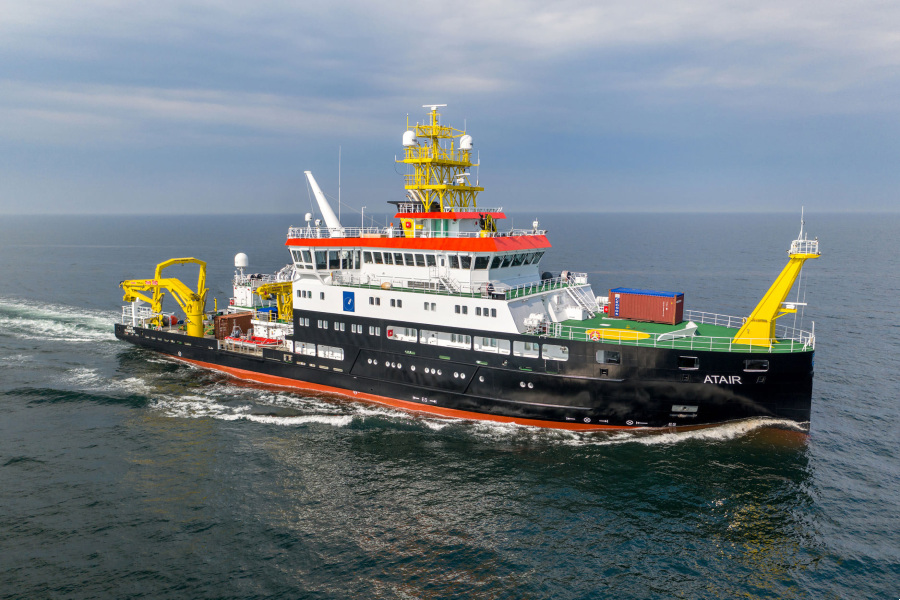 The newer Atair is currently the largest ship in the BSH fleet, measuring 75 by 16.8 metres and with a lightship displacement of 2,775 tonnes. Its low draught of only five metres will also enable operations much closer to the coast.

The vessel’s large size allows for the installation of a comprehensive suite of hydroacoustic equipment including a multi-beam echosounder, a sub-bottom profiler, a sidescan sonar, and a USBL underwater location device. There is also room for scientific equipment such as an extensive lifting system, winches, a survey system with lateral and forecast sonar, a sediment plumb bob, a fan plumb bob, a flow meter, an underwater positioning system, and a hydrograph shaft for the temporary installation of underwater sensors.

The vessel has also been fitted with a deck crane and equipment for measuring the pollutant content in the emissions generated by nearby ships.

Atair has two wet laboratories and one dry laboratory while the spacious 200-square-metre working deck allows the transport of additional winches, oceanographic equipment, or five containers housing additional laboratories if needed. There is also a diving pressure chamber and a pure air breathing compressor.

Amenities for the 18 crewmembers and 15 scientists include single cabins with toilets, a sauna, a fitness room, and a recreational area.

The vessel may also operate as a mothership for two 10-metre survey tenders that are optimised for operations in shallow waters.

Atair is among the first German-flagged research vessels to be equipped with dynamic positioning. Through the use of a joystick, the vessel can be manoeuvred or automatically held in position within as little as 1.5 metres of an operator’s desired location. This makes it easier – and safer – for the crew to conduct surveys, wreck searches, and other activities that require highly accurate positioning even in rough waters.

The newbuild is also one of the first German-flagged vessels to be fitted from the outset with a diesel-gas-electric propulsion configuration as well as one of the first purpose-built research vessels in the world to utilise LNG as fuel. Electricity for the electric propulsion and manoeuvring units is supplied by a pair of dual-fuel engines, one of which will be powered exclusively by LNG while the other may also run on diesel with a sulphur content of less than 0.1 per cent.

A separate diesel-only auxiliary engine has also been installed though it will be used mainly as a redundancy in the event of a failure in the onboard LNG supply system or if the LNG bunker supply is not guaranteed.

When running only on LNG, which is supplied by a 130-cubic-metre fuel tank, Atair could achieve a maximum endurance of 10 days, making it capable of sustained operations far from shore. Further, in LNG-only mode, emissions of sulphur dioxide and CO2 are expected to be reduced by as much as 90 per cent and 20 per cent, respectively.

The diesel and LNG dual-fuel engine and the auxiliary diesel engine have both been fitted with exhaust gas aftertreatment systems and soot particle filters to enable the vessel to comply with IMO Tier III regulations.

Atair is based at BSH’s facilities in Hamburg and is being operated primarily in the North and Baltic Seas as well as in the North Atlantic.