Earlier this year, a consortium led by Netherlands-based marine contractor Royal IHC embarked on a pilot project in India wherein an innovative, cost-saving, and environment-friendly solution was utilised to address the problem of erosion caused by sedimentation in reservoirs.

How did the idea of re-using dredged sediment as an erosion prevention measure come about? What factors or events convinced Royal IHC to develop this concept?

Reservoir sedimentation is a problem that escalates with the aging of dams. The storage loss due to sedimentation increases annually by 0.8 per cent, which implies 57 cubic kilometres annual storage loss over all the dams worldwide. Sediment management has therefore become vital to mitigate such a growing problem.

In this study, we developed a pilot application of an integrated approach to circular sediment management in Dakpathar Barrage in India. The approach includes an assessment of flow and morphology of the reservoir and downstream reach using ground data and mathematical modelling (as a non-structural measure), environmentally friendly sediment handing techniques (recurrent intervention), as well as innovative techniques and their application on re-using removed sediment. The barrage is located across the Yamuna River in Uttarakhand State in India. In addition to the sedimentation problem at the barrage, recently (August 2019) bank erosion has occurred at the downstream area of the barrage.

The approach is expected to be applied to provide a circular solution to the sedimentation problem. The solution involves the re-use of dredged material filled into geotextile tubes to protect the bank. The modelling study provides impact assessment of sediment removal and bank protection activities and their optimisation.

The study demonstrates that sediment in a reservoir shall be treated as a resource [for preventing erosion in the reservoir itself] and not simply as a by-product to be used for other purposes.

How does the “geotextile tube” concept work? What attributes would make this approach more effective in reservoir dredging compared to other approaches?

Typically, although dredged sediments can be pumped directly into the tubes and the dried material is often used afterwards, the geotextiles still end up as waste and without the same benefits offered by a building element. However, over the last decade, with new knowledge, innovative techniques have been developed to include geotextile tubes filled with dredged sediment in the design of civil structures. With the introduction of unique developed models and after numerous laboratory and field tests, these ingenious hydraulic structures are engineered and designed. In fact, dozens of projects have been carried out with the use of geotextile tubes filled with (dredged) soft sediment.

Many geotextile tube applications are possible. With local dredged sediments, structures such as embankments, dikes, dams, breakwaters, and harbours can be made. For each specific (hydraulic) structure, the failure mechanisms, geotechnical influences, morphological situations, and hydrodynamic forces are determined. All these aspects are combined into a number of design and engineering models such as the tube strength model, consolidation model, settlements model, construction models, loads model, design model, textile specs, and test model.

With these models it is possible to design and engineer geotextile tubes in order to fit them in almost any hydraulic structure. Important aspects here are the geometry, strength, and durability of the structure. The improvement and calibration of the models as well as the research on new designs, methodology, and applications is continuously ongoing.

By directly re-using dredged sediment within projects and creating hydraulic structures locally, the geotextile tube technology as a building element is more effective in reservoir dredging compared to other approaches. Further, the filtering function of the tubes significantly reduces dewatering time from months to days.

Besides the reduction of time, cost savings are also realised. Without the need for raw materials which have to be transported to the project site, the geotextile tubes are effectively used within the project. In this way the dredging process chain is connected to the construction chain, making it a perfect example of a circular system.

How and where were the dredged sediment for the tubes gathered?

The geotextile tubes were filled with sediments that have been deposited (sedimented) in the Dakpathar reservoir in Uttarakhand, India. The removal of sediment from the Dakpathar reservoir was conducted by means of hydraulic dredging using a submerged dredge pump. The system consists of a simple design, where a pump is operated from a floating pontoon with an A-frame in which the pump can be hoisted and lowered accordingly. The grid at the suction inlet is made to prevent large material from entering the pump and subsequently being transferred to the disposal location. 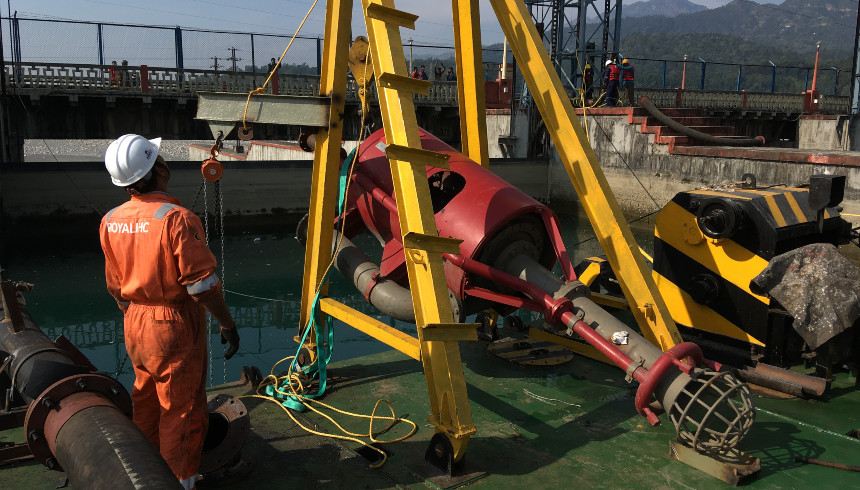 The pump that was used featured jet nozzles through which water was pumped at a high velocity to fluidise the sediment. The resulting sediment was then picked up by the dredge pump and thereafter transported to a designated disposal location.

Who are the agencies or organisations involved? What did they contribute to the project?

The integrated approach on circular sediment management was developed and initiated through this pilot demonstration project at Dakpathar by a consortium of Dutch companies consisting of Deltares, NETICS, and Royal IHC.

Royal IHC is the knowledge expert and the equipment supplier for the reservoir sediment removal and transport, as well as overall project manager and supervisor during the project’s implementation.

Deltares is an independent, non-profit institute for applied research in the field of water, infrastructure, and subsurface technology. Deltares investigated the flow as well as the sedimentation process of the reservoir, after which it built a morphological model of the reservoir. Using this model, several sediment removal and disposal processes were simulated to identify the most effective approach and its associated impacts.

The sediment engineers from NETICS specialise in the development of innovative technologies in the field of building with dredged sediments. NETICS contributes to the reservoir sediment mitigation with a circular sediment management plan. This includes the supply of sediment from the reservoirs, which will be coupled to the potential demand for building material in the area. By using specialised software and models, the geotextile tube hydraulic structures were designed and engineered based on the outcomes of the morphological model of the reservoir.

Rock and Reef, a Mumbai-based dredging company, was appointed as subcontractor for implementation of the pilot project. After being trained on how to operate the dredging equipment, its personnel were able to execute the reservoir dredging works (under the supervision of IHC).

The pilot project is supported by the Dutch government through the Netherlands Enterprise Agency (RVO) and Netherlands Water Partnership (NWP) and is part of the Dutch Partners for Water subsidy program. It has been implemented in cooperation with dam operator UJVNL and Drip India Irrigation.

What dictated the focus on reservoir dredging as opposed to other types of dredging? Why was India chosen as the venue for testing this concept?

As stated in the answer to the first question, reservoir sedimentation is a challenge that escalates with the aging of dams and with environmental changes (leading to more extreme weather events). In order to act on this growing problem, IHC and its partners decided to focus on an integrated sediment management approach. Sediment removal by means of reservoir dredging was chosen among others as it minimises the impact on dam operations (i.e. The dam can still be operational even as dredging works are ongoing.).

India has more than 5,000 large dams of which more than 2,300 were built prior to 1980. Reservoir sedimentation has therefore become a big challenge in India. The impact will be severe given the fact that dams are of crucial importance to meet the country’s ever-increasing demand for hydropower, water supply, and water safety in India.

Did the project involve any significant processes besides the actual dredging? What processes were these and what were their objectives?

For this project, reservoir sediment was pumped into geotextile tubes and used for reinforcing and strengthening the downstream river embankment. Furthermore, a potential bonus of this project could be the possible sale of sand by local businesses as sand is considered a highly valuable building material in the region. Once the geotextile tubes are filled, the dredged sediment can be discharged and collected behind the filled tubes and can be sold locally.

What were the biggest challenges encountered during this project? How were such challenges overcome?

One of the biggest challenges faced was ensuring that everything was in order, from the yard in the Netherlands to the actual first pumping trials in India. On several occasions, regulations and local laws compelled the team to make changes to the proposed dredging plan; some changes were even made just days before the starting date of the dredging works. Fortunately, our local office, IHC India, was a valuable partner in arranging parts and services locally. This also had a major influence on the planning of the dredging works.

What key takeaways did this project provide? Could these lessons be applied in other dredging and reclamation projects in future?

As an example, the planning can change until the last moment, mainly because of a very different approach of working while working in a foreign country, in this case India. However, this is not necessarily a disadvantage.

For instance, during the project implementation, another bracket for the TT-pump was required and it was discovered that it could be manufactured in a local workshop. The same was true for a large steel rod to connect to non-woven material to the gabions. In other countries, this could not only cost a lot of money, but also take a lot of time to arrange.

Furthermore, a key takeaway is that having a local partner will make the process a lot easier during the project planning and implementation.

When were the works completed?

After several months of preparation (data gathering and analysis, elaborating a dredging and re-use plan, and acquiring local work permits) the actual dredging works covered a period of approximately four to five weeks. Mobilisation of equipment and personnel had started in mid-November 2019, and the initial sediment removal and re-use works were successfully completed in January.

Will this innovative erosion prevention technique also be implemented elsewhere?

The geotextile tube technology is being developed and improved continuously. It started with the use of geotextile tubes to create small nature-friendly banks, then breakwaters, large embankments, and even complete islands. The size, shape, strength, and quality of the geotextile tubes improves after each project, and the empirical data and knowledge on the behavior of dredged sediments also expand over time. Building with natural resources becomes more important each day as we all have an incentive to use more nature-friendly and climate adaptive solutions. Also, re-using waste materials is very important in a circular economy.

The innovative solution of using geotextile tubes filled with dredged sediment from the reservoir for creating new erosion-proof bank structures is, in our opinion, a great example of a sustainable and future-proof solution that may also be implemented elsewhere. Besides the gathered unique and valuable data from this project, the technology is once more improved and ready for the next challenge. Anywhere in the world where dredging of sediment should be combined with building new hydraulic structures, landscaping, flood defences, or other applications, this technology can be implemented and can even be further developed. 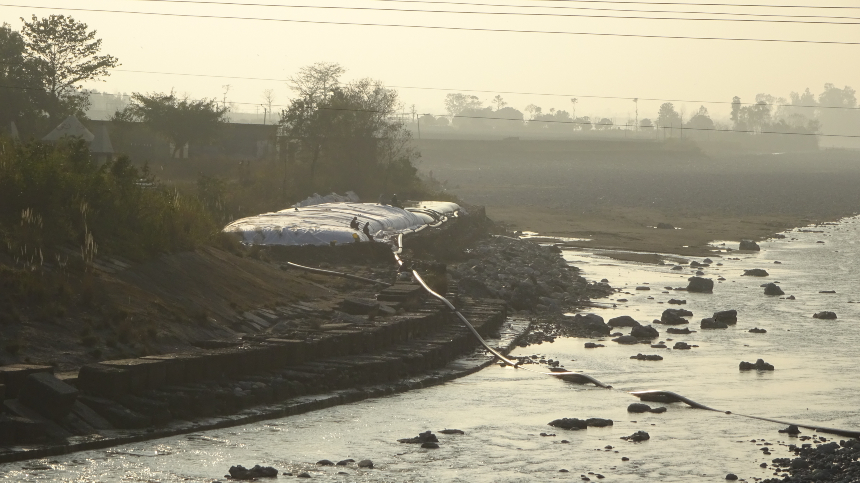