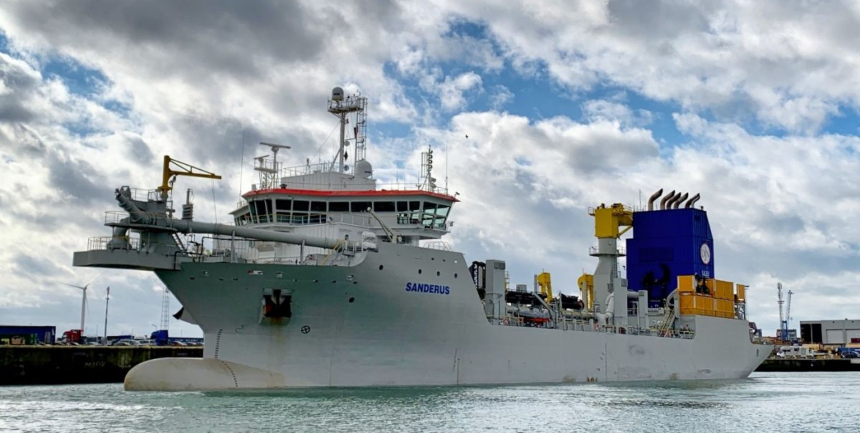 Sanderus, which has been named after an earlier dredger that has since been retired from the Jan De Nul fleet, is the first in a series of two TSHDs that were specifically designed to conform to both EU Stage V and IMO Tier III emissions standards for vessels that operate in inland waterways. Low emissions and a maximum loaded draught of 7.2 metres make the vessel suitable for work on projects in coastal areas and even in more confined environments such as the rivers that pass through many of the major European cities.

In line with Jan De Nul’s initiative to further reduce the relatively low emissions from dredging activities – which recent data reveal are responsible for 0.1 per cent of the total emissions generated by global shipping traffic – Sanderus, as well as the other recently delivered vessels in the Jan De Nul dredging fleet (which also includes three low-emission, 3,500-cubic-metre TSHDs built by Keppel O&M subsidiary Keppel Singmarine), was purposely built to accommodate diesel-electric propulsion coupled with an exhaust gas treatment system.

Whereas some other marine contractors have opted to refit their vessels with LNG-powered engines as an alternative to engines that run on conventional marine fuels, Jan De Nul had deliberately avoided that route. The company has cited research studies that show LNG-powered engines were still capable of producing at least the same amount of harmful emissions as those generated by conventional engines and that adding a filtering system was a more effective means of reducing such emissions regardless of the type of fuel and propulsion system being used.

Sanderus is thus equipped with a catalyst that renders NOx harmless as well as a soot filter that could block fine particles, and the operator claims that up to 99 per cent of nanoparticles from exhaust gases could be extracted by the treatment system. Moreover, the vessel is slated to operate on a 100 per cent renewable biofuel oil (BFO) derived from animal waste feedstock. Recent tests revealed the BFO could reduce CO2 emissions by as much as 85 per cent over a period of 2,000 sailing hours.

Sanderus is presently working on its first contract, a project wherein it will help maintain navigation depths in the access channels to many Flemish ports over a period of two years.